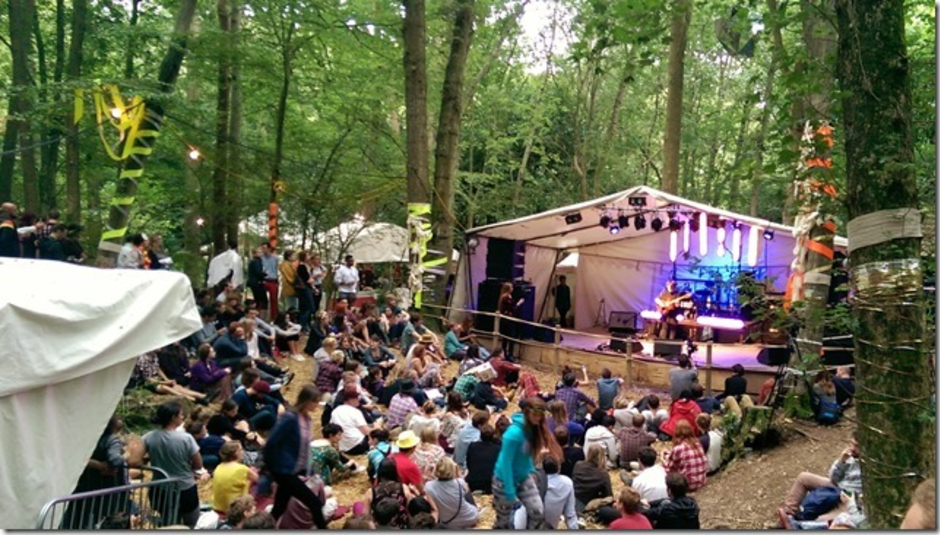 In the Woods festival 2014: the DiS review

In the Woods festival 2014: the DiS review

And so for the ninth year we tumble down Laurel Collective’s rabbit hole and into a wooded wonderland deep within the Kent countryside. This year, like last, we are allowed to linger a little longer, with curated events from Friday evening right through to a lazy Sunday breakfast. In the Woods has truly grown up, from a tiny acorn of a party with Laurel Collective and friends, to a mighty oak in the festival world. Respected as a platform for emerging artists, as well as attracting increasingly familiar names (think Laura Marling as a Friday night opener), In the Woods was deservedly the winner of Best Independent Festival at AIM Awards 2013.

The welcome is family warm. Our little nook of the garden of England is strewn with flowers, littered with interactive art and sprinkled with curios. Around every leafy turn we find new delights. Weird and wonderful faces peer out between the branches; a bear, a nightmarish rabbit, a half-human beastie, a dinosaur down a periscope stomping through the bracken. We stroll through trees and clamber over brambles into open spaces framed by the forest. It feels organic, as though the festival has risen out of the woods of its own accord.

And then there’s the music. The line-up is a secret guarded as closely as the location, and this year it does not disappoint. Febueder’s minimal rock echoes through the trees, reminiscent of previous attendees Alt J. Juffage brings us noisy guitar and idiosyncratic Chicagan melodies. Shopping’s spirited front-femme uses her lunchtime set to rouse the crowd from their falafel and tagine slumps, whipping the hipsters up into a frenzy of dance with her jangly urban guitar pop.

Away from the two stages there is a host of activities to keep us amused. Silent cinema, spoken word, mighty gods in the fields (holding beer cans and roll-up cigarettes) challenging bypassers to take on their games. The sounds of bass guitars ripple through the summer air. There is tea and cake and people spray painting hessian. The day draws on. New gods are crowned and danced around. It all feels Latitudinous without the commercial edge.

Back at the Quarry stage, Temple Songs kick off a jolly indie rock set. Rows of people sit on tree trunks, straw-strewn ground and mossy slopes, unobtrusive. Above the stage a rough cut diamond mirror refracts the leaves. There is space and the air is clean. Heads nod and the hipsters twine flowers into their hair. Temple Songs are a motley bunch; we love the bassist's ginger beard and beach fuzz driving riffs. A couple of slip-ups on the sound don’t dampen the tree spirits in the crowd. We wrap our ears around the playful twisting harmonies and think of The Strokes. Then over to the Laurel Lounge for Trudie Dawn Smith. Chillaxed beats and a warm clean bass snugly support her rich smoky voice. She’s like eating a warm stew on a cool evening. The high hat ticks bounce off the branches that arch over our heads laden with weird alien fruit. Boys clamber over earthy mounds with beerslop on their trainers, and everything is intertwined with the woodland. Trudie DS unsheathes the synths at the close of her set and the vibe eases over, treacle-smooth, into the arena of dance. The people with the painted faces start getting their hands in the air. A tree is climbed. And it begins to feel like dusk is drawing near. Or maybe that's just the beer…

Next up, Soak at the Quarry. She stands alone all in black with acoustic guitar and dreamlike voice, an Irish lullaby. Glinting memories of CocoRosie in her intonation but so much more soft. She climbs her way around the fret board in delicate dampened finger picks. Her music is pure, perfect and nostalgic against the gentle hum of chatter.

Down-time amongst the ferns we lie before heading over to Francobollo, or ‘stamp’ in Italian, should you want to know. These boys kick off with over-driven guitars and a touch of confusion but, after a somewhat unassuming couple of openers, the Scandinavian rocksters hit their stride. What follows is 20 minutes of japery and intrigue. There is the drunk man on stage and his delighted friends, the slow dance for the lovers, the cuddling. And then the communal cuddling. Now, we’re not really a crowd for group hugs, but this just sort of happened.I promise. There is a mosh pit, a proper one, and children with beer cases on their heads dancing around the amps. It all becomes a bit of a blur and we have to lie down in the grass with an ale and a hotdog.

But there is still more to come. Slaves turn out to be the festival highlight with a blinder of a set beneath the twinkling, fairylit sky. These guys are aggressively good. You wouldn't want to meet them down a dark alley but from the safety of the front row they’re genius. With just four arms between them, these guys use elbow grease and a comprehensive set of pedals to hurl about the dynamism of a full band. They’re powerful, antagonistic, intimidating. Except when a big moth flies over the stage and scares the guitarist.

The highlights are many more than there is room for here. We sit and talk them over around the midnight bonfire before kicking up our muddy heels at the den or silent disco. Somewhere along the line we catch the voice of Kate Tempest, a wordsmith woman with a great mighty power, enough to hush a drunken woodland world. And somewhere else between the carnations and the secretsundaze set, the sun comes up and we pack up our tents, rub our eyes, hug our friends and bid the woods goodbye.