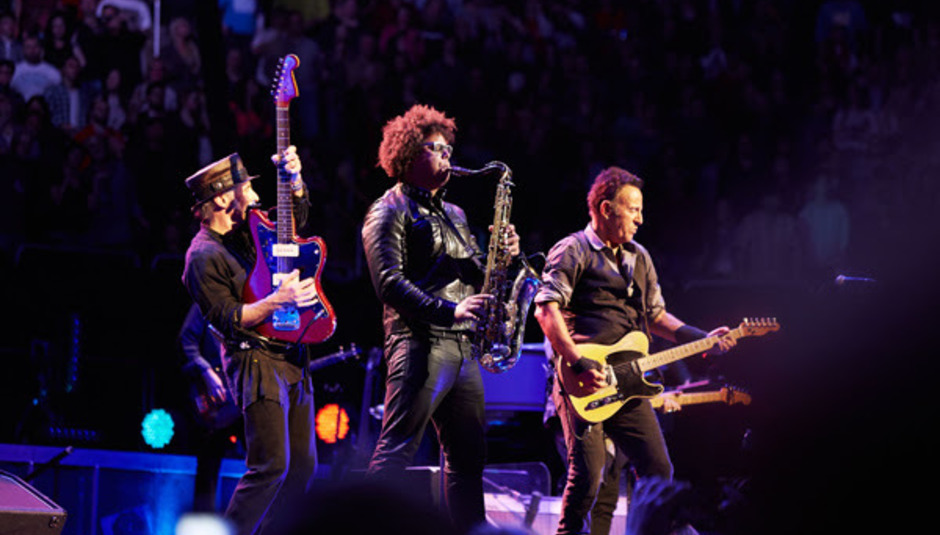 There are many extraordinary moments in Bruce Springsteen and the E Street Band’s latest return to Wembley Stadium. But the most memorable is undoubtedly the point when a bearded twentysomething hipster (male), dressed as Courtney Cox in the ‘Dancing in the Dark’ video, holds up a sign imploring The Boss to pull him up and dance with him during said song, which The Boss duly does.

I could probably write a long humourless thesis about those few minutes, what it tells us about Springsteen’s cross-generational appeal, his self-awareness, his impeccable liberal values, his showmanship, and perhaps interestingly the slight note irony that underpins the E Street Band’s shtick.

Of course, the most extraordinary thing is that a 66-year-old man and his substantially sixtysomething band play joyous, despairing, furiously energetic rock’n’roll for three-and-a-half-hours, no support, no encore break, no nothing. But it’s only extraordinary in the context of the entire rest of live music: this is what the E Street Band do, and Springsteen fans expect a minimum of three hours, no ifs, no buts. Does something have to give? Springsteen himself remains a remarkably youthful, energetic figure who seems broadly indestructible. But will he still be able to do this in a decade? And if he can, will his band? Springsteen’s PT Barnum-style intro rap varyingly describes them as ‘Viagra poppin’’ and ‘death-defying’ – the E Street Band is presented as a sort gang of reprobate old timers, out for one last adventure.

There have been murmurs that they may call in a day sometime soon, and certainly everyone looks very emotional at the end. But it would be funny to duck out with what is nominally a tour to support the recent reissue of 1980’s The River (they only actually play six tracks off it and in fact the setlist will be an all-too perfect goodbye, but it seems hard to believe they'd really sign off surrounded by faintly bathetic cardboard cut outs of Springsteen circa-1980 everywhere).

I'm being a bit ramble-y because in all honesty it's difficult to think of any fresh superlatives to chuck at the band, in part because they're so phenomenal that the idea this can't possibly go on forever adds a slight undercurrent of pathos.

One very striking thing – and despite the nominal remit of The River tour – is quite how much ‘new’ material gets played. It’s not heaps, but two off Wrecking Ball, one off Magic and three off (the admittedly quite old now) The Rising shows a band entirely invested in their latter-day material, and the audience is entirely reciprocal. I could pick out more moments: the bleak heart of the show, when a hymnal ’41 Shots’ transitions into a despairing ‘The River’; moments of out-and-out silliness, like Springsteen chugging a fan’s pint, or repeatedly fluffing ‘I’ll Work for Your Love’ – a band the song haven’t played in years – before nailing it, no corpsing. Above all it’s the heart, generosity and good humour they invest in the night that stays, a sense of the show as being something we’re all creating together.

When I was growing up, ‘stadium rock’ was a virtual curse-term. But that era is long gone: it's hard to imagine any band forming today will ever have the opportunity to build up to that level. If the E Street Band are to the last stadium rockers standing, maybe we’ll concede that stadium rock was alright after all.