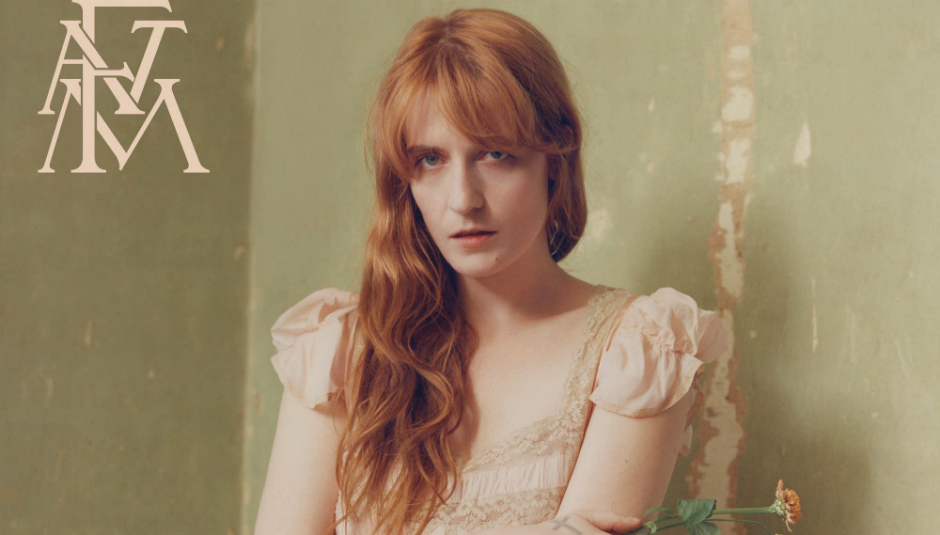 Lee Adcock on Florence + The Machine's High As Hope

Do you remember the naughts? I sure don’t. Or I do, but not on the musical plane. I tried to feel for the pulse of the modern “alternative” in my freshman year, but my signal was jammed with so many flashing lights, whiz kid stuff like Foster the People and MGMT and Phoenix and Franz Ferdinand, all of whom broke out ever so slightly before the present day. So nothing that caught on with my peers ever struck a chord with me: Adele, boring; The Killers, what fluffy nonsense; and why did my brainy friends rope me into shoulder-to-shoulder sing-alongs with Coldplay’s ‘Viva La Vida’?

Ergo, by the time cascades of harps descended from every house radio on Florence + the Machine’s ‘Dog Days Are Over’, I’d pretty much tapped out. It’s funny, though. Do you even remember the words to ‘Viva La Vida’? I sure don’t. But with ‘Dog Days’, every cadence, every lilt of Florence Welsh’s higher-than-the-heavens croon, every rafter-pounding stomp is etched in my head, like routes on a travel map. And all those roads lead back to 2009, the land of optimism and new beginnings, divided mainly by your allegiance for or against Lady Gaga.

Granted, that old guidebook hasn’t been updated in nearly a decade. Welsh and her machine have since won a Brit Award, recorded two more albums, and even headlined Glastonbury (the first female-fronted act to do so circa 2015). What brings us here to High As Hope, then? Some nagging curiosity, perhaps, the same that makes you roll your eyes and RSVP for your high school reunion? Maybe. Or maybe I’m just looking for something new to remember.

Subtle, quiet. Hmm. Oh, but here come the soul piano chords. Wait, what’s that? No, don’t mind. This is much more subdued than I expected. Welsh is still kinda bombastic, but she’s holding the beast back, and I’m digging it. Strings. I feel like I’m missing out on a story, though. Wow, this is a super impressive salvo for the opener. Like a big velvet curtain. This “You’re so hard” part reminds me of Emilie Nicolas, who I haven’t thought about in a while. OH, THAT ENDING WAS LIKE BAM!

Whoa – “At 17 I started to starve myself” – ooh. Really like how this is progressing. An unusual sort of sexy – with purpose. Fuck me, the pointed piano chords are really hitting the spot for me. This song, I see, is about the ways we abuse and disregard our bodies for the sake of beauty – “We all have a hunger” refers, I think, to that desire to be perfect in some way. I had SUCH a problem with this in my teenage years, too, and in college as well – “You make a fool out of death with your beauty / And for a moment, I forget to worry” - YES, THIS. As a 95-lb something, I got nothing but compliments in high school, and my mum just kept egging me on. Damn, this is already way stronger than I expected.

Now, this is quite airy, a shift in the winds. We’re in anecdote phase, I suppose. Quite regal – oooooh, I like that drum thing that just kicked in. I also like how the piano is literally hammering one note and KILLING IT. Oh, now it’s playing more notes. OOOH BUT THAT DRUM THING. Now the dramatic violins. Yeah, yeah, this production is knocking me out over here – it’s a pop record for sure, but there’s room for everything to breathe. Welsh’s voice isn’t cramming everything out, although she’s still knocking those home runs outta the park. There are horns in here now, I realize. And I’m still OK with this? Yes! I’ve lost the thread of this song, though. I think she’s conflating old romantic escapades with place-based nostalgia.

Starts again with just piano. Who is this “Big God”? Strings did a fascinating turn. They sound a bit…glitch here? Welsh mentioned ghosts – this does feel a bit ghostly, albeit in a theatre. A number in a musical about creeping around the haunted mansion. Yes. I still like it, though. This part’s quite bombastic, though – we’re not sneaking around anymore. “Don’t leave me on this white cliff / I will slide down into the sea” – followed by some snazzy flutes and woodwinds. What does it mean?

Acapella opening – very typical pop move. For some reason, I’m thinking about Gotye. Remember Gotye? This song is a third of the way through, and I’m still not sure what we’re doing here. Oh hey, I just heard the first harp, I think. Yes. It’s hiding. I feel like this is Welsh’s attempt to write a new folk song, especially with the chorus: “I can’t hide from the thunder and a sky full of song”. A very mellismatic folk song, mind. Of Monsters and Men jolts to mind now, or maybe Fleet Foxes. Hmm. My enthusiasm’s wavering.

Crystalline piano here, the kind that plays in jazzy bars on rainy days or late nights. When she says “Grace”, she’s definitely referring to the concept of grace, not a person. Good to clarify. More anecdotes. This is quite an anecdotal album, isn’t it? I didn’t read anything about High As Hope beforehand, so I don’t know for sure. This one’s got a big chorus and has a subtle gospel choir in the back, a nice touch. That strange echo on her voice was a nice touch, too. This is quite a pleasant one. I feel like the bombast is well-deserved here – especially in the line, “Grace, I know you carry it”, followed by “This is the only thing I’ve ever had any faith in”. That’s sweet.

The violins are menacing here. Whoa! Then it segues to very old-fashioned soul momentum, which is REALLY pushing my buttons here. The violins arc up in a curious way. FUCK. YES! I am all about this one. Hmm? “Patricia, you’ve always been my door stop”? Is that a compliment? I don’t know, but I’m loving the warped arcs of the violin. And this bridge is a stunner – now we’re travelling through mist a bit, misty eyes rather, and I am spellbound finally. I see tea, I see me as a kid trying to fathom new indigos, I see the stars and someone beside me…

There you go! Nice segue from wonder to pitch black. Sort of. Welsh is singing again, and taking up negative space. Hand claps and things. A very standard folk-pop thing. Mumford and Sons, much. But not really – well, I was about to say intimate, but not quite. At any rate, even from this surface skim, I sense that Welsh thinks about these words more than the Mumfords do. Well – “And it’s born again with each sunrise”? Followed by a drum that goes down HARD. This part is giving me the shivers. Drama like this doesn’t happen too often in the alt-rock world, does it? Not lately. Synths have been the thing, and the 80s; Welsh is having none of that here. This sassy choir part is great; sing it, sister, sing it! Yeah, I’m here for this, front row of the symphony section. God damn, what does this even look like live?

‘The End Of Love’

Sombre opening. Either someone in the musical has died, or – no, that sounds more hopeful. Not death. Maybe something ended. Someone’s broke? Someone lost something. The piano suggests a departure, for sure. Oh, that’s right, this is called The End Of Love’. I wouldn’t know how that feels! I like how, even though Welsh is again filling the room with her soaring vocals, this is still minimal and tragic, like some empty apartment with dust on the floorboards. Some scene in Rent. Whoa, that synth scared me. What are you doing here?? I was just praising Welsh for not using you! There, I think I scared it off. The handclaps are back, but they’re different. Sharper. Sounds more like an actual audience, than a key on the keyboard. Of course, it’s a summer in New York – everything starts and ends in New York, doesn’t it? I’m still not sure what happened, but the tragedy feels, again, deserved. Good pacing.

She says here that she finds it harder to write about happiness as she gets old, because happiness is just boring. Is that true? But the loneliness never left her – oof, I get that, though. No chorus will come in, eh? Damn straight. This is quite clever. Welsh is talking about the mundane here, I guess the small victories or failures that just wash away with the tides. Quite a thing. And appropriately stark, private, beautiful. Oh! And it’s done! What an elegant finish! Like ending on a flourish instead of a bang. I dig it!

Wow. I just listened to what was ostensibly a modern pop record, didn’t I? And I more or less enjoyed it, didn’t I? I did! No wonder Welsh and her machine qualified for the Mercury, I’m inclined to say. This makes me think, that I’ve written off so many records this year because I thought they were too “big”, i.e. that the artist doesn’t deserve my attention. But damn! My head is running through all the chicks and divas I’ve been neglecting lately for all these low-level post-punk and new wave greenhorns.

For more information about Florence + The Machine, please visit their official website.

The Mercury First Listen Review: Ever...