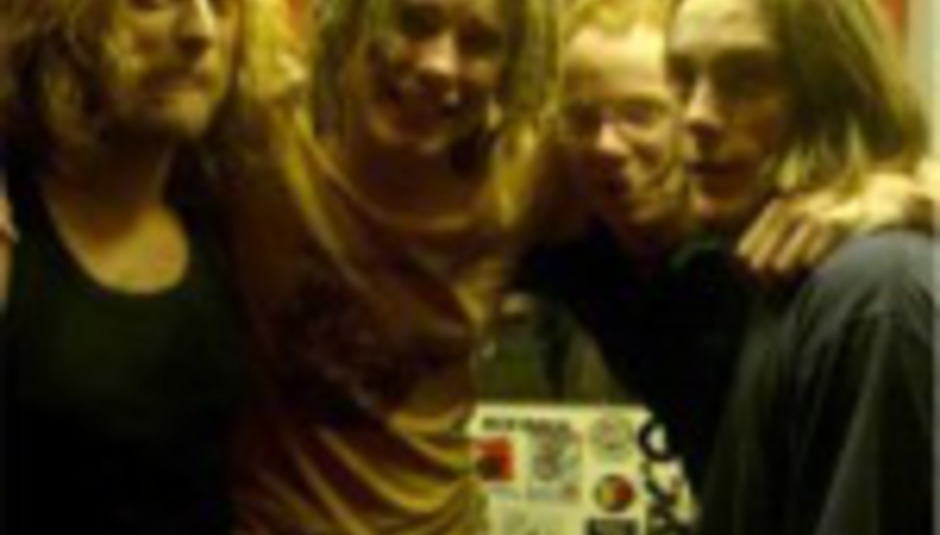 A while ago, Drowned in Sound’s attention was drawn toward a youthful rock combo hailing from the sombre climes of Southampton (indeed one member resides in our own deputy editor’s hometown of Fair Oak). This band is Moneytree and the chance to DiScover a component part from the other side of Mr Diver’s bitter, twisted world was far too good to pass up so we hooked up with keyboardist Michael Anderson and eager bassist Joshi Finesilver to discuss their aims and ambitions.

Moneytree’s recorded output so far lends to fair comments about jazz-influenced post-rock with a heady helping of abstract, staccato grunge riffs. When combined with Campbell Austin’s unorthodox vocal style, which veers from chirruped arpeggios to ground out yelps of fury, parallels with Incubus are understandably rife. Joshi doesn’t like this comparison much: “They’re a bunch of girls these days. Of course, a few years ago definitely, but I don’t think the Incubus stable is really where we're coming from or what we like to listen to now.” Michael is slightly more welcoming of the link, adding that, “Lots of people have made that comment. It’s not bad, but we like to think we're doing something more intricate and diverse.”

It’s difficult to find anything truly original these days; with one school of thought suggesting that there has been no truly groundbreaking music since the 1970s and Jean-Michel Jarre’s pioneering concept electronica (down, Radiohead fans, down). With that in mind DiS pondered where the band placed themselves in the modern music market. “There’s a lot of good rock music about,” explains Michael, “But not much that draws on the same influences as us. There is definitely one strain of rock fusion band, but that's not the sound we're really going for. We’d like to put ourselves forward as a band more like Mars Volta, Karate or Faraquet.”

With songs that change from the “very introverted” to the “circumspective ones about everyone else”, Moneytree’s lyrical content is hardly full of abstract imagery and decontextualised waffle as much as the personal adventures and experiences of the band with subtle humour and desperate pleas tucked in for good measure as well as the “odd song about their hedonistic adventures”. Hedonistic adventures in Southampton? As if!! It’s not Corfu! The quartet are putting some of these tracks down in February with legendary producer Joe Gibb (Funeral For A Friend, Jane's Addiction, Johnny Truant, The Murder Of Rosa Luxemburg) in the form of a single and they are very excited about it. Hopes and dreams of more press and better gigs are riding on this single being “pimped out”, but Joshi knows not to expect too much, “We've been lucky with the positive press reaction so far, but I’m not holding my breath. 2006 will hopefully be the beginning of something special.”

Following the topic of a release aided by the skills of a top-end producer and the fact that Moneytree are still unsigned, where do they stand on the idea of signing to a major label? Is it something that they would do? Michael wants their “music to be heard by as many people as possible” but also concedes, “There are more creative advantages with an indie. With our principles we'd be at home on a large indie. However, by saying that indie is good and major is bad is simplification. It’s not black and white: indie is good; major is bad.” It’s true. Rumour has it that as long as Joshi gets a plane, he’ll be happy.

Joshi and Moneytree came together while they were all on tour with Mystery Jets – Joshi with his old band – who were also at the same school. Celebrity friends alert! Is Southampton the next UK rock ‘scene’ after South Wales spawned Lostprophets and then Funeral for a Friend? Possibly. In another interesting twist, adding a new tale to their impending biography, Moneytree make another bold claim: “We used to hang with Billy Ocean!” It is evidently true, as Mr. Ocean’s son also went to the same school and apparently used to play drums a bit in the band early on in their career. They're not finished yet, though, as Mike explains to an incredulous Raz how he used to be the pianist for S Club 7 when he was 14. Amazing. You could not make this up. Well you could. You'd have to. But no, it's true!!

It's pretty indicative of their gigs in general. Judging by the occassions that DiS has been subjected to their alternate aural battery and caress, ‘tight’ doesn't do justice to the sound forged through a number of years’ toil and practice together and rather than being an end in itself, this aforementioned tightness serves as a stable platform for structured improvisation. Take Campbell's ode to his horse tranquliser of choice, ‘Ketamine’ - feedback drones and thudding triphop grooves, all swathed in delicate jazz keys, bursting into Fugazoid intensity at a whim. If that sounds a bit heavy going, you have Joshi's dual tricks of the aforementioned beatboxing and incessant but goodnatured cracking onto any audience member within leer-shot to leaven the mood.

Moneytree have just finished their second tour of the country and played at Nambucca in December with one Frank Turner, previously of Million Dead. The tours are booked in the true spirit of independence and the group wangled the Nambucca date due to Mr. Finesilver’s superior blagging technique, apparently. He has ‘connections’. Mike explains further, “We book tours with places who have liked us; where people have enjoyed our sets. We try to make it as grass roots and local as possible. Sometimes we are booked but sometimes we book our own shows and have been stung a bit by expensive fees. We prefer getting booked though. It’s less stress.” Indeed, this tour just passed proved more than just eventful as Moneytree played a mental house party in Bangor, partook in a beatbox combo experiment and emerged victorious from a Battle of the Bands competition in Cardiff where they won a free trip to anywhere in the UK. Nice.

With another tour to be confirmed in the spring and another tentatively pencilled in for planning closer to the summer 2006 is shaping up to be a big year for the four. Moneytree play the London Islington Academy on January 13th. Yes, that’s a Friday.