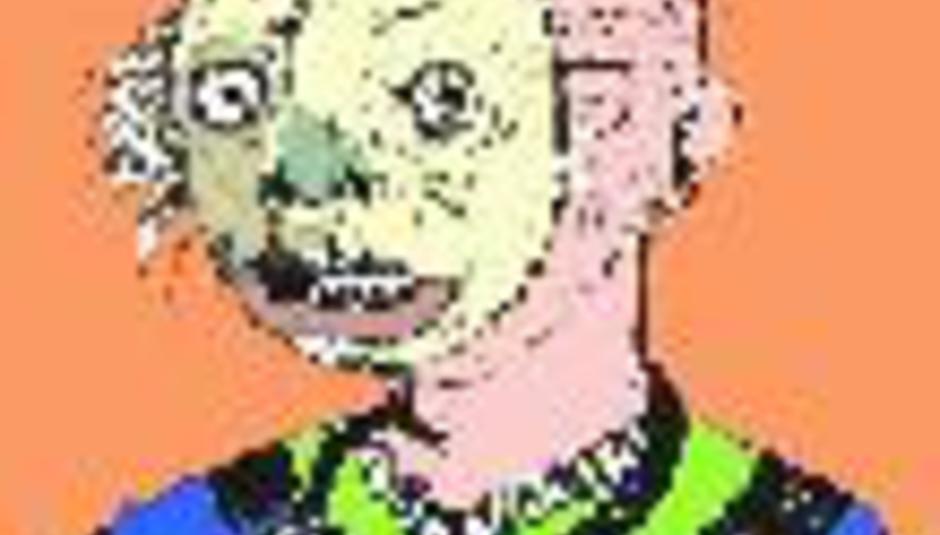 by Mat Hocking July 9th, 2003
The Verge, a small venue in Kentish Town and a short walk from Camden, North London is a buzz of excitement. The draw which has pulled 100 or so kids to its dimly lit environs is jumping playfully about the stage, microphone in hand, humouring the crowd while some form of pre-recorded synth-pop music is providing the backdrop to his nasal ramblings. Indie kids, punk kids, even metal kids are singing along to every word with ear-to-ear grins and eyes fixated on the bespectacled lone musician occupying the stage. There is no band, no colourful backdrop, no overblown ego showing off slick guitar moves and the stage isn’t cluttered with huge, expensive equipment. Just one man, a microphone and a Yamaha QY700 music sequencer.

Meet Adam. Overground, he’s a nobody. An average-looking guy, unassuming, quietly spoken, sporting wrap-around glasses and baseball cap. Underground, he’s a hero, a saviour even, to thousands of kids looking for something different, someone who isn’t Jon Bon Jovi on a huge stage half a mile in front of them. Someone in fact just like them, who’s smart, funny, an incy bit geeky, but ultimately down-to-earth, playing music that’s not afraid to make fun of itself or to address issues armed with a pinchful of satire. In turn, music fans from around the world have warmed to his lovable character and childlike sense of humour that has seen him become somewhat of a celebrity in the punk rock fraternity. In fact, if there was a punk rock version of ‘Never Mind The Buzzcocks’ he would probably be a regular team member.

I’m sitting with Adam in his tour van, which he shares with support band Sixty Stories - from Winnipeg, Canada - and the incredibly funny (though not entirely intentionally) German driver Martin, prior to tonight’s show. There is no tour manager, Adam insisting that he prefers to organise everything himself. And I mean everything. Having committed himself to a 6-month touring regime each year, doesn’t this get a bit strenuous?
“There’s definitely pros and cons of doing it each way,” he shrugs. “I think it’s easier to be productive as just the one person thing, even logistically because I don’t need to organise five people’s schedules for the same day. If I wanna go on tour and play a particular show I do it, I don’t have to check with anybody else. And I think the reality is, financially this wouldn’t work if it wasn’t just me and I wouldn’t have been able to do it as intensely as I have done it. So in those respects there’s a lot of positive aspects of doing it by myself. The negative aspects are that I have to do everything in terms of every part of it I guess - musically, all the travelling I do… If I’m sick or something I can’t really take time off.”

Adam Goren (to give him his full name) grew up in Oreland, just outside Philadelphia and graduated from Penn Charter High School. He’s lived inside the City for the past 8 years and despite his touring commitments, he couldn’t imagine living anywhere else. “I really love Philadelphia. I have a lot of old family and friends that I’ve grown up with and continue to live there, but I just feel it has a lot of things that a huge big city has to offer. There are tonnes of amazing places to eat, but it’s affordable, not like New York City or London.”

Although music was important to him through his teenage years, it was only after he studied for his degree in science and education that he started playing in his first proper punk rock band Fracture, releasing subsequent albums on respected Florida punk label No Idea. After breaking up in ‘95, Adam hadn’t really much plans for anything else until he was introduced to something which would change the way he wrote music for the following eight years.
“A friend of mine played me a song that he wrote on his music sequencer because we had just broken up. It was just attractive to me because you could just write, record and arrange entire songs on a music sequencer rather than me just writing songs on my guitar and having no-one to really play with. So I just started doing it like that, like I wanted to start writing songs for fun and for friends. I just played a couple of shows and it was a lot of fun, and I kept doing it and it kinda evolved. It wasn’t like, ‘oh I’ll start this freaky one-person band.’”

The response from some areas of the punk scene wasn’t so accommodating. With instruments being electronically simulated for his songs, many refused to accept it, with even Maximum Rock ‘n’ Roll fanzine refusing to review his first few albums. The fact they only granted him a review once his Atom & His Rockage 7” came out – a release which saw his early songs re-recorded with a full live band to see if they would take notice – is a testament to the elitist bigotry still prevalent amongst punk purists in the scene. So with this in mind did Adam find it a brave step to take?
“I dunno. It didn’t feel too brave. It was really just, like, fun. There’s definitely people who think it sucks or it’s stupid or stuff like that. But it’s fun to do and I’m comfortable with some people not liking it. It’s fine, it’s not for everybody and it’s totally fine with me if people don’t like it.”

And Adam’s fully aware that his caustic commentary and fun-pop tunes will continue to ruffle the feathers of those who just can’t seem to grasp what he’s about. Which is why he’s taken to typing up hate mail he’s received onto his website (complete with grammatical errors) with a personal response written underneath.
“Well, there’s different kinds of hate mail. I mean, some of the hate mail stems from a song called ‘Hats Off To Halford’ that praises the Judas Priest singer for being openly gay, because metal can be very homophobic so a lot of the hate mail stems from being misunderstood, that people misunderstand the song. A lot of people who emailed me who liked metal were like, ‘Don’t call us metal dudes gay!’. Hate mail like that, and that calling me a faggot and stuff totally misses the point of the song, and I guess it kinda gives me a forum. Like I have a lot of strong feelings about a lot of things and it’s really important that that’s not misunderstood. It gives me a chance to spell it out even more than in the liner notes and the lyrics to people with really terrible listening and reading comprehension. That’s the space to do it. Some of the hate mail is so ridiculously, creatively spelled and just totally funny.”

Indeed, one browse through the hate mail section of his website sees one gentleman proclaim, “You are pushing back the acceptance of gays with every fucking song you write”, before contradicting himself at the end of the letter with, “fuck you and your gay un-punk shit”, oblivious to his derogatory use of the word ‘gay’.

What do your parents think of your music? Are they surprised by the cult-like following you’ve received?
“My parents are really, really amazingly supportive. I mean, first of all they know I’m not a fuck-up, like they know I had a back-up plan when I was spending a lot of time doing this, so it wasn’t like… I mean, they just trust me. They think my head is on straight, which I kind of agree with I guess.”

Adam comes from a family of extremely intelligent people. His mom’s a divorce mediator/lawyer, his dad’s an endocrinologist, his older brother’s a lawyer, and his younger sister’s in med school.

Do they all listen to your music?
“No, I mean they listen to it, but I can’t believe that they possibly could like it. They’re just really supportive and happy that I’m doing something that I love to do and y’know, it’s worked for a while.”

Adam’s also a diabetic, and at this point takes out his testing kit to check his blood, talking continually despite taking several minutes to extract blood and take down various readings. Having adapted his lyrical approach to incorporate commentary on all kinds of everyday occurrences, you’ll probably find he’s written a song about his diabetes too. He’s just released his new album ‘Attention! Blah, Blah, Blah’ on Hopeless Records and, as on all previous albums, addresses some pretty bizarre subject matter through songs such as ‘Dear Atom, You Do Not Want Children, Love Atom’, ‘I’m Downright Amazed At What I Can Destroy With A Hammer’ and ‘Mustache TV’ (about sellotaping a black moustache to the TV to see what celebrities would look like with a moustache), which has even inspired merchandise in the form of little plastic re-usable moustaches at his shows for 75 cents, although none were available at the show tonight.

With most songs decorated with cartoons to illustrate the subject matter in the liner notes, would Adam consider having visuals behind him onstage where those cartoons are able to come to life on screen?
“I’ve not thought about it, but that may be because I’m lazy and I don’t wanna assemble or carry anything more than I have to carry. I guess if it was done well it could be cool but I don’t think I’ll ever get round to doing anything like that.”

Watching Adam performing onstage tonight I think it’s safe to say he has all he needs for an entertaining show right there. His wit, his goofy stage presence and his synthesised indie pop. And while he admits he will enjoy a teaching career at some point in the future, right now he’s having fun, making cool music for un-cool kids and enjoying his position as indie-rock’s most hilarious satirist.