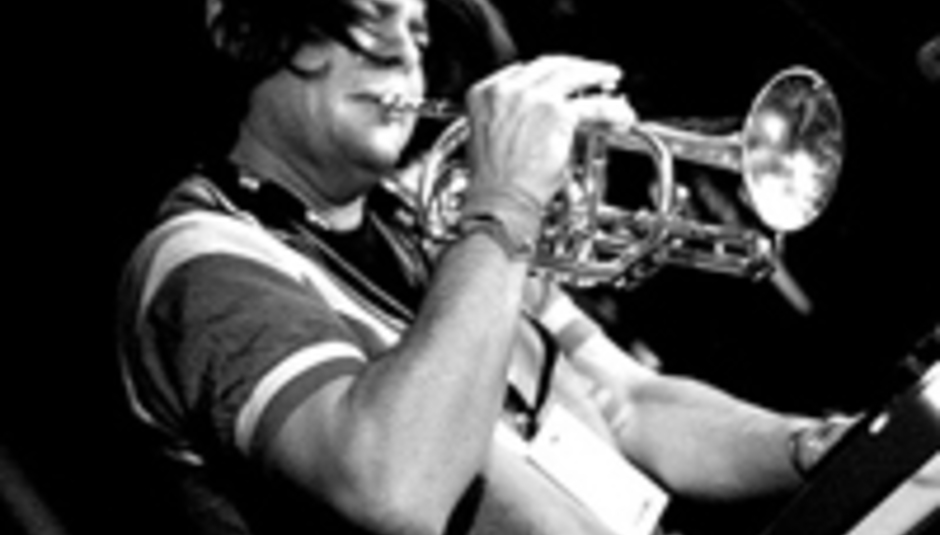 British Sea Power shows are often rambunctious affairs, what with the finches and the foliage, but it’s more often crowd members who come a cropper, taking the odd flying foot in the face, or Ursine Ultra, the ten-foot bear who suffers at the flailing hands of various agitated band members. Events took an unusual twist at the Leeds Irish Centre last night, however, when cornet player Phil Sumner (pictured) cheated death after “swan diving” from atop a 12ft speaker before attempting to land on his face.

Fail. Nervous glances were exchanged in the audience as the venue lights came up and the band played on, Sumner by now completely oblivious to the world and in a pool of his own blood before ‘Sea Powers’s manager eventually came to the rescue.

“The gig was all going fine until the trumpet player stands on top of this massive speaker to the left of the stage and starts playing his trumpet,” explains a crowd member. “He plays it for about three minutes then chucks it onto the stage, stands up, stretches his arms out like in a swan dive and just tails off the speaker, full on body weight and slams into the floor where it looked like he hit his head on a hard plastic glass.

“Anyway people around him are visibly shocked as he isn't moving. He's out cold for about three minutes, the lights come on but the band keep on playing. Eventually their manager lifts him onto his feet when he comes round and he has to limp backstage under the support of two people looking utterly fucked, his face painted stripes all smeared and these lasses were all stood there with their hands over their mouths.

“And then we all saw the big pool of blood on the floor. The band finished the song and we all went home.”

Obvious concerns remained though, so we went after a word from somewhere within the depths of the BSP camp.

“The impact knocked him out,” confirmed the press department at Rough Trade. “Thankfully an ambulance was quickly summoned and he was whisked away, bloody and unconscious and despite a concussion, a broken molar and a maze of stiches in his chin, a very groggy Phil is expected to make a full recovery.”

Sumner is the latest in a procession of indie-rock walking wounded, following in the limping path of Liars’ Angus Andrew and bandmate Woody, the drummer slipping a disc while sweeping up with a dust pan and brush.

As you may’ve learned, the band’s latest album went straight into the top ten on its release last week – read our review of Do You Like Rock Music? here.