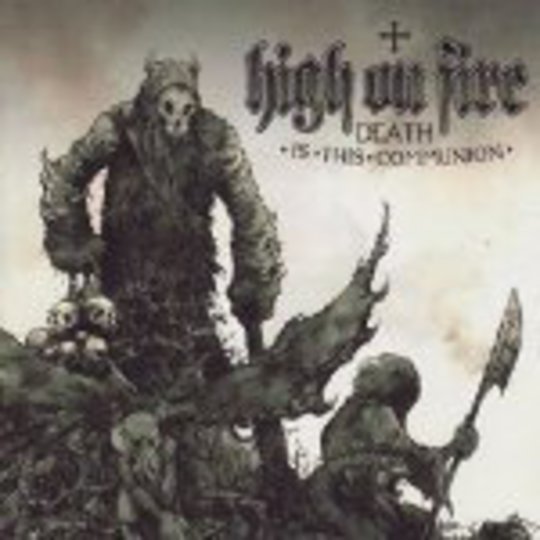 People tend to leap to the conclusion that High On Fire is former Sleep guy Matt Pike’s baby alone, but please remember that Des Kensel – he who drums as if his arms are possessed by armies – founded the band with Pike way back when, and he’s as much to do with their development and evolution as the band’s guitar-slaying vocalist.

Or, of course, lack of, for while there’s no doubting that the quality of High On Fire’s albums has increased with each that’s passed – the Steve Albini-produced Blessed Black Wings being their last – the actual arrangements have barely shifted out of the Stone Age. This is metal at its most moistening – fast, heavy, assuredly _fuck-you – but it lacks the compositional bravado of a band like, say, Mastodon. While High On Fire must be getting pretty sick of comparisons to the Atlanta four-piece who’ve rather stolen their thunder of late, a parallel is unavoidable – via fair means or foul both acts have seen their audiences increase of late, but while one dares to experiment the other merely refines within their field of speciality.

So, Death Is This Communion slays in all the right places, but had it ventured into some of the wrong places we might’ve had an album really worth dribbling about. The title track’s macabre tone sits at odds with the more straight-ahead techniques evident on, say, opener ‘Fury Whip’, and more of this – slow and unrelenting, ploughing on with power despite the drop-off in speed – might’ve made for an album bursting with new listener-attracting variety. As it is, Death… will leave existing fans convulsive with joy but wandering attentions far from hooked.

Live, High On Fire kill it every night, and more of this energy would be welcome on Death Is This Communion: Pike might possess one of the most recognisable voices in contemporary metal, but by as early as the predictably devastating ‘Rumors Of War’ it begins to drag through a lack of versatility. Perhaps some of the vulnerability that also occasionally infects the stage shows would have added a dimension to High On Fire that previously lay in tatters, the crushing qualities of their material stamping it into the dirt. Just a little softeness, maybe?

Kensel maintains a tight ship throughout, and it is he that guides this fourth album to its climax, ‘Return To Nod’; indeed, the drummer makes his presence felt here with a greater resonance than our six-string-menacing front Matt. Jack Endino’s tight and clean production is another plus of what’s not a bad album in any way, but Death Is This Communion could have been so much more, you feel. We don’t want High On Fire turning prog on us, but maybe a slight widening of their artist horizons next time will produce the classic of their catalogue. It’s not like they’ve not demonstrated the potential to be true head-turners over the past ten years, and the time to deliver the cement-the-reputation goods approaches.