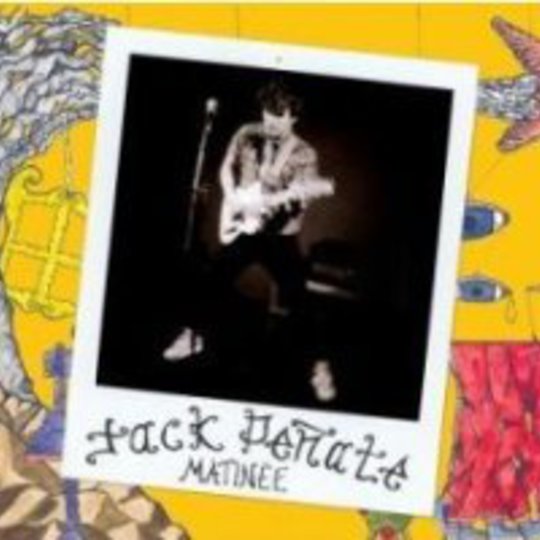 We live in troubled times. There are wars going on, death and disease, and there’s a Conservative government looming into view. Most people feel this cold La Fin du Monde breeze gently swirling round them at all times.

Except, of course, fans of Jack Peñate. And, probably, the man himself. The last time that there was such a plausibly deathly sense of humanity it was the early 1980s, and Jack Peñate was around then, too. Back then he went by the names of Rick Astley and Shakin’ Stevens. It’s rather like the way that Lucifer has gone through different names throughout the ages. Actually, perhaps Beelzebub went under the nom de chanteuse of Rick Astley at the time.

The level of unmitigated, lobotomised jollity that pervades throughout Matinée is enough to send anyone to the trenches. When it’s done by way of a variety of songs that really rather ‘coincidentally’ sound like lots of other people’s songs, then it seems that we should be sending Peñate himself off to the nearest front. Or simply Iran. Just before the Bush ‘parting gift to America’ air strike.

Thusly, ‘Spit At Stars’ appears to be a twin brother of Kenickie’s Punka’ – at least he had the decency to change the lyrics, though. ‘Torn At The Platform’ comes rather too close to that bastion of thoughtful ‘80s pop, ‘Happy Hour’ by The Housemartins – an act to which Peñate is constantly reminiscent of – but without the wit, politics and promise of a bright career to come. London 0 Hull 4. Again. ‘Got My Favourite’ is fecund breezy summer pop with a strangulated calypso feel, but ultimately sounds like a Wham! cast-off. ‘Second, Minute or Hour’, meanwhile, sounds like The Jam channelling the spirit of premature middle age.

The entire record slides towards a dreary pop nadir, making it as suitable to the coffee tables of self-satisfied twenty-somethings as it is confusingly enticing to the swarm of teenagers attending his shows. It’s the sort of record you imagine Badly Drawn Boy creating in another ten years, after he’s squeezed the last vestiges of imagination from his soul.

It’s not just the sounds: it’s also the words. Lyrically, things grate from the off, with cringe-worthy and rudimentary rhyming couplets being Peñate’s irritating stock in trade. By the end, everything has blended into a graceless, jaunty melange of up-down guitar strokes, bellowed vocals and mid-tempo skanks.

You get the impression that Peñate would love to be seen as some sort of post-millennium Elvis Costello, but it took the Twickenham songsmith 30 years to write something as inane and vacuously dreary as_ Matinée_.

Unfortunately for Jack, the comparisons to Astley and Stevens cut a lot closer to the bone.