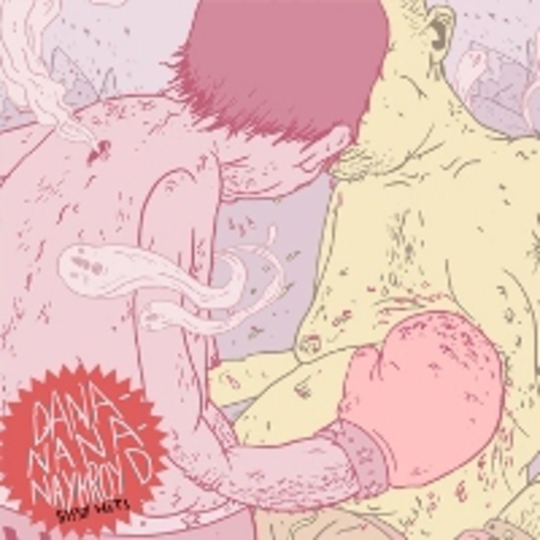 This may not seem like the most remarkable of situations, but it is.

Dananananaykroyd were due to release their debut mini-album in early March. This has been scuppered by, apparently, a lack of money at Jealous Records. Seeing as this only happened a few days ago, it seems a little premature to be begging the band to hear it and writing a glowing review because you're scared that no labels will go after it and give it the release it deserves. But here we are.

Sissy Hits could be a very important recording, and not just for Dananananaykroyd. So concentrated and consistent is its brilliance that you wonder whether they'd be able to keep it up for a whole LP… but we don't have to think about that until it happens. Even if they did bugger it all up on a full-length release, we'd all still have this work to appreciate. Their clarity of musical expression is blinding, but with intricacies that suggest something far cleverer. This doesn't mean the whole changing time signatures instrumental wizardry thing, nor does it mean the whole lyrical-constructs-beyond-comprehension thing either. What it does mean is utterly delirious, insane fun with subtle touches in each corner to elevate these already-brilliant songs to a territory clearly marked 'genius'. This territory is located between other territories clearly marked 'stupidity' and 'ecstasy', obviously. Those are good too.

'The Greater Than Symbol And The Hash' takes delight in its struggle, the initial double-drummer marching insistency finally giving way to a demented acceleration and the kind of squealing guitars we haven't seen this convincingly since Siamese Dream. Vocalist Calum S. Gunn barks amiably about musical terminology ("dotted lines mean that you repeat it!") over a particularly tight din, and the overall effect is simple exhilaration. But the struggle,_ the struggle. Things reach optimum velocity, those squealing guitars are held, built, bred with so much percussion and finally released. Things are, you feel, stretched as far as they might go. But the struggle continues. A solemn hi-hat beats four and we're dragged by the teeth through a deformed version of earlier themes while Gunn's head explodes. Finally, _finally we can see the end in sight when the toms are beaten, oarsman-style, slower and slower and slower and slower and slower, accentuating the off-beats, until we're completely fucking dead.

Ha! Obviously it can't continue at such bollocking ferocity, and we kind of calm down after that. The light pomp of the verses in 'One After One' is a daintily perfect antidote to the grungy chorus and chant of "WE ARE THE PARTY!", for example (I think that's what they're shouting). Then we begin to realise all that stuff about these being astonishingly catchy pop songs. 'Cleaning Each Other' has a particularly righteous guitar-harmony-led chorus that, for all the world, is better than any of Thin Lizzy's. Similarly, '1993' is the right side of funky to retain its rock credentials in some completely, idiotically, carelessly colossal riffs. Another epic in the vein of the opening 'The Greater Than Symbol…', this closer (effectively, seeing as the last track is less than a minute's doodling) shows ample evidence that this band could survive on its melodies and nothing else. David Roy's carefully widdled guitar lines during the second section are beautifully played, and flanked by dinky xylophone and vocal scales. Then it blows your brains off again for a few seconds. After that, the final doodle, 'Infinity Milk' stomps around and finishes with wild and hilarious screams. Wicked, thanks. These are the best twenty minutes of music you'll hear all year, probably.

We could carry on and describe the glumly effervescent humour that pervades each track, or the idiosyncratic nods to music theory and tour bus larks, but you can discover those yourself. Treat!

As you, the readers of DiS, are fully aware, comments left after reviews tend to disagree with the review more often than they agree with it (that might just be mine). So, conversely, I'm personally appealing to anyone who may disagree with this review and asking them not to comment. If you agree with it (even if only partly) then leave a comment saying that you think Dananananaykroyd deserve a record deal and lots of money so they can take over the world in the most rocktageous way imaginable. It'll be right good.