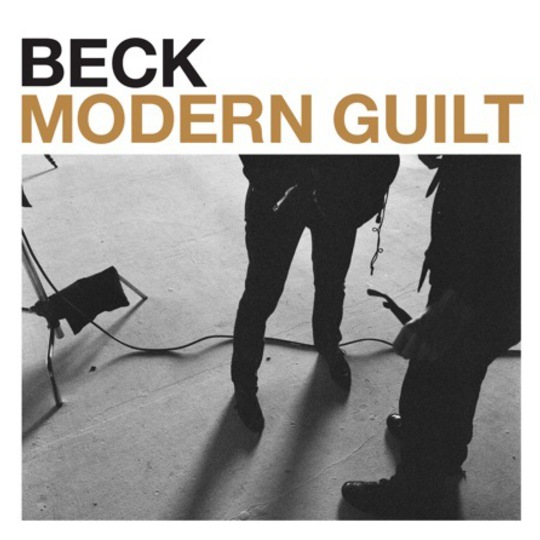 What’s consistent about Beck, or at least has been, is his unpredictability. Like Radiohead, his worst album by a margin was his tentative first for a major label. Mellow Gold, recorded some fifteen years ago, both made and cursed by Slacker anthem ‘Loser’, was celebrated by an audience from which the fledgling Beck rapidly retreated. (For Radiohead’s parallel, see ‘Creep’.)

Since then, in a bid to lose weighty, often crippling associations, Beck has taken to experimentation and constant evolution as a matter of course. Just as an animal once caged is twice as cautious of being cornered, he has dodged the net of easy categorisation by never standing still; embracing folk and retro garage, R‘n’B and hip-hop, enigmatically mining and fusing a cohesive blend - with the caveat that he has also done so successfully and without compromising his integrity.

Modern Guilt though, finds Beck in the difficult situation of trying to marry increasingly introspective musings with his special flavour of upbeat high-style, lo-fi production. Aided by producer Danger Mouse, what we get is the darker Beck seen on Sea Change, uncomfortably forcing gravitas over the breaks and grooves that used to be a vehicle for abandon. There isn’t the brilliant sense of excitement and playfulness that was previously imbued into his very fibre, but superficially it is classic Beck - the warm melodies and brilliant breaks are there, the surf guitar flourishes, the retro synthesizers. Further listens reveal clouds gathering over even the more propulsive tracks but the inherent grooves prevail.

Opener ‘Orphans’ and the folksy ‘Walls’ sit somewhere between Odelay and Mutations_ - perched like a man straddling the perilous divide between two high-speed cars. Whilst the vocals ape the detachment of Odelay they carry none of the flippancy. Black metaphors prevail: rain, meeting makers, falling. “I’m tired of evil and all the things I don’t know” he concedes in ‘Volcano’. Even the wonderful roaming beast that is ‘Chemtrails’ is carried by a sombre underlying synthesizer progression. It’s compelling but a difficult reconciliation, and at times neurotic.

Some of the best tracks prove to be found where Beck’s natural songwriting instincts play out and the compositional mood is allowed to match the lyrical content. The delicious melancholy of the above-mentioned ‘Volcano’, a final staring-at-the-pavement throb that hints at the lack of human empathy one finds startlingly necessary in overcrowded, overbearing city environments, would happily sit on the underrated Sea Change. It is far from unnecessary musical regression by virtue of its honesty, preferable to forced joviality and a truer reflection of where the man is at this moment.

The grab-all that typifies Beck’s compositional style was maybe never original, other than the collage he made when working his particular brand of alchemy - each constituent part drawn from an eclectic but already existing palette. If this means that his niche never really was that, but more a relatively shallow hole which has now filled over the years with detritus and other peoples’ litter as they gather round and copy his methods of assemblage, then it is mark of the man that they are still ultimately unable to ape his style.

For whilst neither a match for the whirlwind of Odelay, nor the sex-party of Midnite Vultures, nor the beautiful renderings of Sea Change, Modern Guilt is still unequivocally a Beck Album. It sits alone in his cannon as being slightly uncomfortable but in turn is a brilliantly concise work (it runs to a little over 30 minutes). It is also devalued only mildly by the allowing of trepidation and fear to creep into his muse. These are as valid drivers as any other after all, wearying as they can be. Unlikely though it is that someone who hadn’t previously found wonder in Beck’s (often brilliant) catalogue would discover Modern Guilt was the catalyst to a sudden appreciation, Beck is massively competent and there is barely an area into which magpie-like, he hasn’t previously delved.

Perhaps it will be in this occasionally stifling contemplation that Beck’s next progression will prove to have rested all along.