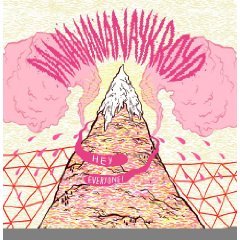 The Scots have pulled off the unenviable task of translating the most fun, most rocking, most utterly life-affirming live show that's currently doing the rounds into a brilliant, coherent debut album»

dananananaykroyd release their new joyous, heady, heavy and euphoric debut album 'hey everyone' on best before records. the band invaded nyc in september - to record the album with grammy nominated producer machine (lamb of god, every time i die, fall out boy, johnny foreigner) and have come up with an absolute killer first full length, that includes previous nme single of the week 'pink sabbath'. bursting with energy, ideas, character and melody, 'hey everyone' throws together every known genre of music, pushing way past their previous moniker of 'fight pop' into a wonderful new heavier / lighter / odder territory in equal measures. launching 'hey everyone' is the opening track of the same name, the album rockets through a maze of spiky, pop tinged, punk / art rock anthems, at times with dizzying velocity and power. first single and 4th track 'black wax' slows the frantic pace down a notch, with its angelic chorus, use of piano, bells and gang vocals, before the rest of the album hurtles and thrashes its way along, constantly surprising and startling in equal measure. think pavement, glassjaw, sonic youth, a spikier blood brothers, as well as post hardcore and the dischord record label.