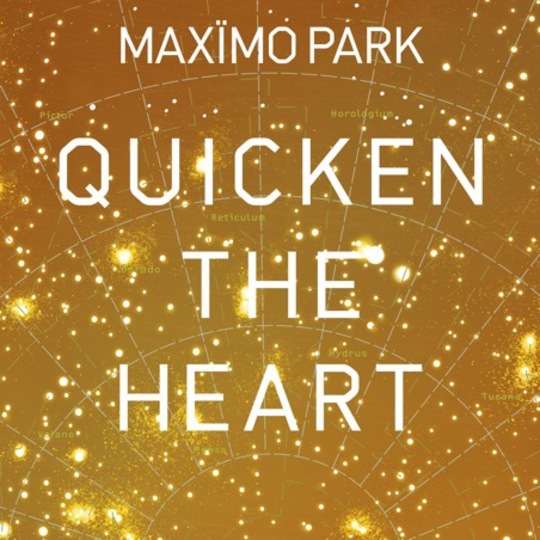 For a public gorged on the Rock and Roll myth, it's eminently desirable for an artist to impale themselves on one of those viciously barbed stakes that break them suddenly and without mercy: with luck it's a plane wreck; drug psychosis; an insurmountable ego clash; hell, even the crippling ennui which stems from the vacuity of commercial success - the kind which manifests itself in a hiatus of interminable length - it's all preferable to the slow death-rattle of a dying muse.

The relative disappointment of Our Earthly Pleasures raised a question of Maximo Park: with so many bands seen to be dying on the vine both creatively and commercially in the grip of a savage new climate, could they revitalise themselves sufficiently to escape the cull? The answer would appear to be inconclusive, for the time being at least - as Quicken The Heart represents Maximo Park settling into a rut, albeit an intermittently attractive one. From the opening chords of 'Wraithlike' and throughout the next forty-five minutes or so there's little attempt at a new land-grab, merely a consolidation verging on entrenchment. Punchy guitar motifs, racy tempos and danceable post-punk has been Maximo Park’s stock-in-trade since their emergence in 2005, and new tracks like 'I Haven't Seen Her In Ages' and 'Overland, West of Suez' are eminently decent songs even if they exhibit all the hallmarks of a de facto approach to music-making.

Things rise briefly above routine when 'Calm' offers a way out of the malaise; synthesizers curl in its wake like vapour trails and Paul Smith tosses off lyrics in the manner of pages being torn from a book; "You say I don't know much about bravery, but I'll raise you up with my bad drugs and used promises". In this song alone there's a way out of the impasse but Maximo Park to their detriment choose to ignore it: the only other apparent divergence from formulae is to be found in the loping, near electro-grunge (yes, really) of ‘Tanned’.

And that’s the crux really, Maximo Park are coasting. There's not a whiff of discomfort, of struggle, of invention. Most of the songs aren’t particularly worse - or better - than any other song on the album; they just amount to a fairly pleasant experience that papers thinly over the impression we've heard it all before. Whilst dramatic re-invention isn’t demanded, what was once exciting has by virtue of the ever-moving cultural goalposts become mostly either facsimile or just dull; a situation compounded by a failure to match the vitality that was at the core of A Certain Trigger.

No band is likely to deem themselves irrelevant and call it quits of their own accord - God knows that Andy Burrows tried manfully to affect this decision from within the Razorlight ranks in order to save the many - but that kind of sacrifice is rare. A band on the sheer slide into obscurity must increasingly fend off the cruel slights of idiot-critics whilst sales dry up like frogs in the sun...the final insult being the point at which the poor bastards are mercilessly cut loose of their dream and tumble into the mire with the rest of us, but it's a snivelling, undignified way to go. It's unlikely to be the fate of Maximo Park anytime soon but there needs to be something a whole lot fresher than this to convince people they didn't exhaust all they had to offer in that first breathy ascent.

Shooting from the Shadows EP