Shooting from the Shadows EP 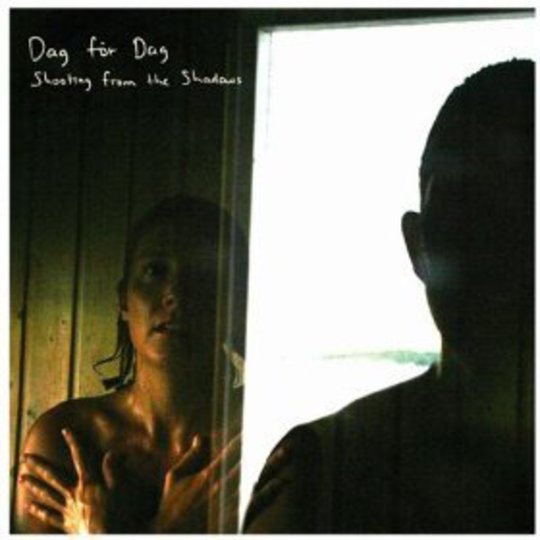 Dag for Dag are new Saddle Creek signings, Sarah and Jacob Snavely, originally from Missoula; later, Wisconsin, Honolulu, London; most recently, Stockholm. You’ve got to wonder whether it’s a very literal homesickness that keeps bringing them back (figuratively) to the safe haven that is their early record collection, rather than any particular place. This is some of the most straightforwardly catchy indie guitar rock to grace my CD-player in a while, but (if it’s possible) it’s also the most solidly early-80s, and that doesn’t just mean: “lots of Chorus on the guitars”.

Dag for Dag combine early-Cure, Violent Femmes, Cramps, and (perhaps) early Low (an inevitable effect of forlorn female vocals and minimal instrumentation). Opening track, ‘Ring Me, Elise’, takes one of rock’n’roll’s classic premises and makes it feel timeless – girl, I searched the whole wide world for you, I’m in a band, and now it’s your turn to call me. Jacob’s got a hint of latent craziness in his voice like Robert Smith / Gordon Gano / Lux Interior, the fuzz-guitar thrums fat and urgent, and he’s got all these theatrical vocal tics (“sh-sh-shivering in your door”) that never quite tip into pantomime, but summon up images of the gothic end of garage rock… as opposed to the biker, glam, or caveman shtick.

If the title’s an unconscious borrowing from The Cure (whose own ‘Letter to Elise’ was piano-led, but who churned out plenty of fine singles like this, when they were still punk), that doesn’t detract. Something about the reverb suggests Jacob’s sending his voice down telephone wires, or maybe drawing on some cavern of dark memories. As an apprentice-piece it’s obvious, classic, familiar… and yet cool enough to show real promise, rather than get damned as “derivative”.

It’s not a one-off, either – ‘You Holler, You Scream’ (track 4) re-writes the same song, without making you feel cheated; it’s Sarah on lead, and Jacob on the distant-sound-of-a-mind-snapping. ‘Pirate Sea’ slows down the tempo, but shows off Sarah’s shrill, swooping falsetto, over a choppy rhythm that could have come from the Violent Femmes’ first album. Jacob joins her toward the end, and then again for ‘Words’ – an organ-led piece that recalls Secret Name-era Low (no, not I Could Live in Hope) but uses Jacob’s weirder vocal tone to take it a different place.

It’s hard to say whether the pair could sustain the interest over a great album – ‘Better Now’ shows they can do upbeat, but then match it to a sinister organ solo, followed by a duet of wordless whooping that’s neither mad nor sad. Plus, the bonus-track remix of ‘You Holler’ is one of the few in living memory that adds anything… like a budget Curve. Hmm… guess I’ve talked myself into thinking this might be the White Stripes who won’t baffle me when everyone else is into them…!