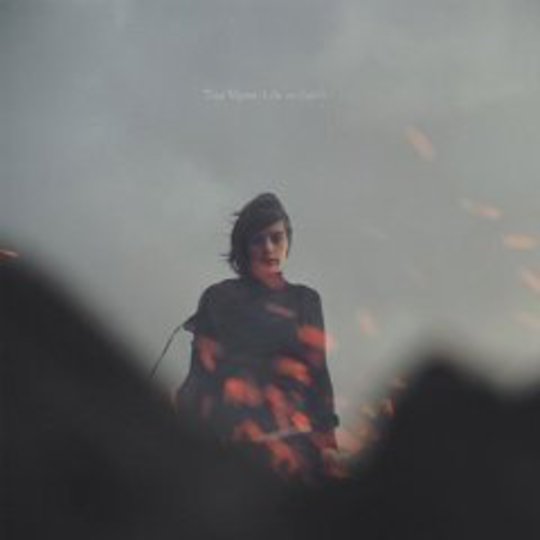 Vincenzo Natali’s 2003 film Nothing takes its two central figures, Andrew and Dave, and positions them in a characterless white void. The big endless nothing appears to stretch on forever, triggering a peculiar kind of claustrophobia in the two men, who slip into various existential crises as they struggle to adapt to their new surroundings. All that remains of their previous world is the house in which they both lived. Tiny Vipers’ Life On Earth is music that barely exists, that sounds like it was recorded after Jesy Fortino (who is Tiny Vipers) fell into a deep chasm and wasn’t particularly bothered about getting out. There’s almost nothing here. No air, no light. Sometimes there’s hardly any music at all.

As such, Life On Earth is quite the misnomer. Fortino sings like she’s slowly having all the blood drained from her body, and there’s an otherworldly quality to her music that suggests she often daydreams herself out of existence. The great white void in Nothing is thick and springy, and Fortino’s great vat of silence is sculpted from similar materials; her blackout world is dense, stodgy, impenetrable. I feel like I‘m fumbling around in the dark while listening to Life On Earth, occasionally startled by a swell of instrumentation or a sudden flourish of words from Fortino’s lips.

The ‘folk’ tag is often bandied around when Tiny Vipers’ music is discussed, but Life On Earth has been pruned of all familiar genre trappings. Fortino has a lot in common with Sunn O))) and Lightning Bolt, who take genre conventions to such brutal extremes that they emerge somewhere out the other side, operating in a space entirely of their own creation. The space Tiny Vipers have found is so intimate, so personal, that listening to this music generates a feeling of great personal intrusion, like stumbling upon someone caught in the throes of something so ugly that you just can’t tear your eyes away.

Much of Fortino’s music is delivered via gentle guitar plucking and her soft and occasionally soaring voice. The vocals and instrumentation placidly undulate in the mix, often frittering into complete obsolescence. Most listeners to Life On Earth will endure a battle with the volume control, yanking it up to hear the subtle intricacies in Fortino’s playing then forcing it down when occasional drone-like noise billows up in the mix. The album is far too lengthy — the hour-long runtime is a punishingly vast stretch of time to spend in such a private space, even if the closing ‘Outside’ does let a few tiny cracks of light into the shaft.

Life On Earth bears a clone-like quality, with each track operating on a near-identical plane. That said, there are two songs that stand out. ‘Young God’ is impossibly austere and strangely beautiful, with Fortino balancing out the pathos in her voice via some refined piano playing that resembles drips of water ricocheting against the walls of a damp cave. The 10-minute long title track inhabits a similar place, its sinuous rhythms and lucid vocals providing a neat counterpoint to the song’s actual subject matter (sample lyric: “all hail the darkness/It is ours”).

Fortino really excels when she dredges her music up from the mire, coercing it toward a lighter kind of melancholia. But the darkness frequently eclipses the light here, making the weighty solemnity of Life On Earth hard to bear. In Nothing, the two protagonists discover they can make items disappear if they’ve stored up enough hatred towards them. Their blank void world appears to have been created by their own vitriol. Fortino may not have hated the world away, but she possesses a similarly intuitive ability to block everything out so she can operate in her own peculiar vacuum. It’s an admirable quality, but the desperately sad nature of her music makes it a place that’s difficult to visit with any degree of regularity.

Another Day Has Passed