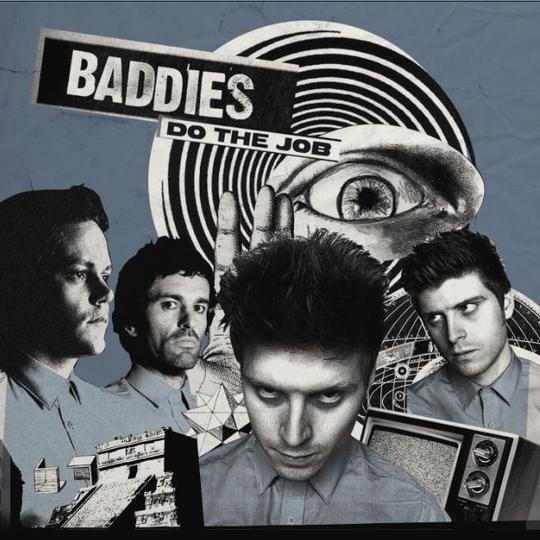 Is music art or entertainment? Should the goal and end product be something which has, at the very least, strived to push boundaries, experiment and strive for something higher? Or should the method with which to make the most faces and ears happy be the only thing that matters? Southend’s Baddies are a group placed staunchly into the 'entertainment' category; not just for the music but for the showy blue-shirted, top-buttoned uniforms. There’s understandably more than just a slight scepticism when considering bands who endeavour to cook up a 'look' with such unity in clothing – the ones that aren’t Kraftwerk, Rammstein or GWAR in any case. This is not for any particularly cynical reason, but simply because it makes you want to say “stop trying so bloody hard!”. Right, that’s that qualifier out of the way.

There cannot be many bands providing the intensity that Baddies possess. The spaced-out hyper-rock of We Are The Physics puts them as their closest, slightly more rapid, contemporaries - it doesn't take long to realise this. ‘Pisces’ wanders into dark and deep territory, managing to exhibit a sound last found alive in the Eighties Matchbox B-Line Disaster, with a ratatat drum beat lurking below a particularly dirgey combination of guitars, bass and regular. ‘At The Party’ spews out the finest elements of post-punk with a flanging, sliding bassline and a group chanting choruses.

The primary problem found with Baddies is in their variance of direction, tone, texture and pace – or lack thereof. There’s a certain mould and formula that’s been adhered to on Do The Job and, although it’s not one without mileage, it is one which, after a few listens, does begin to wear (you) down. This is less because of the 'sound' Baddies have but more down to the intensity of the record – it’s a tough listen in that there aren’t any natural breathing points. ‘We Beat Our Chests’ comes closest to this mark: creeping in around somewhere near to 132bpm something, here it seems practically pedestrian. Yet such is the pace with which this guitar-led dirty dozen of are ploughed through that boredom is just not an option – not until half-way through the fifth swift listen, at least. It is around this point when the ideas start to become the casualties.

Now, I’ve yet to see Baddies live, but I have it on good authority that they are, like David Ginola, well worth it. This is not a stretch to imagine from the fist-pumpin’ earlier ventures like ‘Colin’ and the sometimes-harmonic ‘Battleships’. As to whether their first full-length represents a fair picture of them, the answer is seemingly both the negative and affirmative. There’s more than few flashes of the band Baddies could be, but the hurdle of a consistent LP is just a few inches too high, this time.

Some good bands don’t make fantastic albums, it’s true – that’s fine, there’s thousands of decent records with a less-than-favourable ratio of songs marked “thumbs-up” to songs marked “thumbs down” – especially when you consider that if this was an EP of the five best tracks (the opening five), it’d be bordering on mind blowing. Still, it’d be increasingly difficult to look at this as a good thing for a band at this level.

At their very best Baddies are an exciting, invigorating prospect – racked up with more than enough kickety-kick from all instrumental and vocal corners but, at their worst, they somehow manage to come off as a pale imitation of, well, themselves.