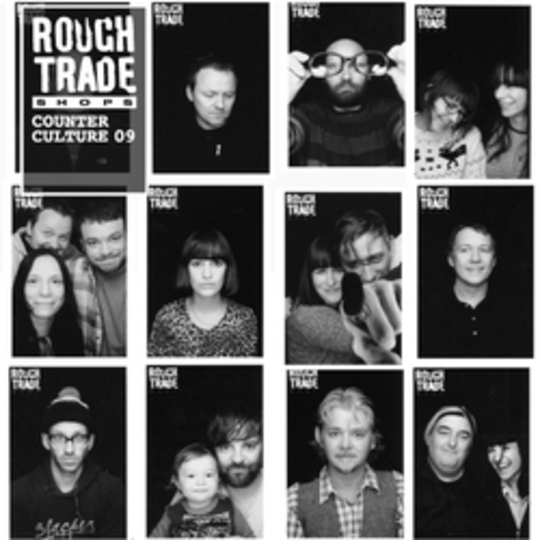 As the flagship for independent record shops, Rough Trade really needs no introduction. Having started its Counter Culture compilation series back in 2002, subsequent collections have been sought after by punters and A&R scouts alike, having cascaded then barely known talents such as The Futureheads, Yeah Yeah Yeahs and Dizzee Rascal among others to a far wider audience, arguably providing a sprightly leg-up to these artists on the way to the top.

This latest selection of the good and the great but very rarely bad is largely culled from last year (hence the title prefix 09) and pulls together a mammoth forty-three songs across its double CD package. Obvious highlights such as The Drums 'Let's Go Surfing' and Broadcast And The Focus Group's 'The Be Colony' rub shoulders with the lesser known but no quality spared likes of Manchester's Dutch Uncles, whose 'Steadycam' is an energetic burst of ratified guitar pop and Fists, a Nottingham based four-piece who occupy the middle ground somewhere between The Cardiacs' obtuse quirkiness and Belle And Sebastian's fey whimsy.

Indeed, its the lesser feted (for now) acts here that steal the show hands down. The Units' 'High Pressure Days' is high octane death disco circa The Paradiso 1980, while Zomby's 'Kaliko' offers a sturdy two-fingered salute for experimental dubstep. Add the Syd Barrettisms of Kurt Vile ('Breathin' Out'), new age hippy folk of Edward Sharpe And The Magnetic Zeros ('Home') and Crocodiles' Ramones inspired shoegaze ('I Wanna Kill') and you're still only less than a fifth of the way into a dazzling compendium of unmissable delights.

Of course we could enthuse even further here about Male Bonding's scuzz punk, The Phenomenal Handclap Band's ultra happy weirdness or YACHT's electro-doom but instead, would rather insist you do yourself a favour and spend that hard-earned tenner on a copy of this exceptional compilation instead.