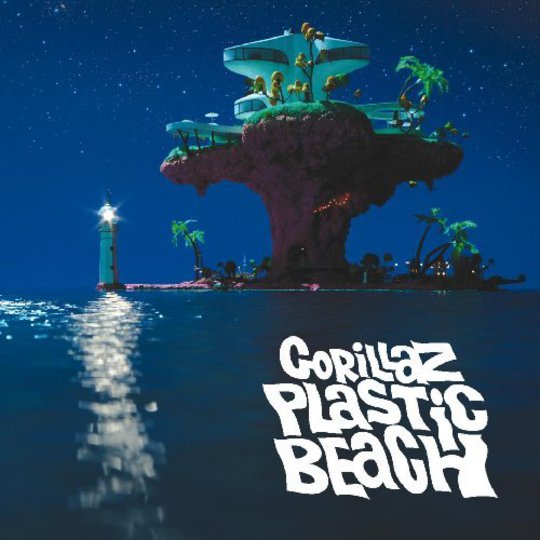 Let me start with an admission. You see, Gorillaz are the only band I ever truly wanted to be in; I long to live in their houses, drive their dune buggy and pash with Russel. And I shan’t lie, I did want to be Tank Girl as a youngling and I did once spend 10 hours holding a door in order to secure entry to a Blur gig. I mention this not out of dreary one-upmanship of course, I say it so that we are quite clear from the off: I am biased. But even if I were not, a world as beautifully troubled over as theirs is almost always worth getting silly about. They really have bothered to put rust stains under the windows of their new, Tracy Island, modernist house. And I really do want to stare out of them, with Noodle at my side.

And so we come to Plastic Beach, in need of a boat to get us there. So here is ‘Orchestral Intro,’ floating along with its winningly plaintive strings. ‘Close your eyes,’ it is saying, with a mouth surrounded by cheeky, pirate stubble. It is also saying ‘submit’. This time, we will be visiting our foursome on an island built on sea-dumped detritus, for a subtle pop sermon on the evils of disposable living, Styrofoam food and clothes made by people who are too little and too young. Later, we will say ‘Thank you for having us,’ but for now, just hear how ‘Orchestral Intro’ finishes with sirens that sound like a warning. Remember this for later.

‘Welcome To The World Of The Plastic Beach’ is yet more prelude, beginning with what sounds like the old Thames Television ident before morphing into Snoop Dogg (who should not have been allowed to mention Planet of the Apes because it clangs like hammery references always do). And though his unmistakability serves Gorillaz well (you can imagine he and Murdoc might be friends) ‘White Flag’ is where the magic really starts to happen. It is basically the bit in The King & I where all Yul Brynner’s many children come in and curtsey to Deborah Kerr - except Kano and Bashy are heralding their entrance, official Toasters to the Court. Yul wouldn’t like it of course; he would strop off, his harem pants billowing. But we should stay, because The National Orchestra For Arabic Music are responsible for the dizziest, daintiest, stateliest and, well, flutiest thing on the whole album. Both Kano and Bashy sound wonderful, as they sing of a place ‘where the women look hot, but the beat’s cold’ and also of not ruining their newfound paradise, with RILIGIN and WARZ. They do seem to want to shag all the women though, so it is a good thing it is raining prophylactics. ‘No rain, condoms it poured,’ Bashy sings. And it is glorious.

‘Rhinestone Eyes’ has 2-D doing his customary dulled vocals (it is my least favourite of Gorillaz’ ‘things’) and it shuffles along bleeping, like a sad, synth-led, ballad [a sallad? No.]. But about two-thirds of the way through an echoing kiddie choir appears, and suddenly all is charm while Albarn sings of nature corrupted in "factories far away". Although you do wonder; why is her love "like rhinestones" and not diamonds? It gives me no pleasure to report that love affairs sound very unsatisfying for the Gorillaz, this time around.

‘Stylo’ is next, and it really does make more sense in the context of the album - even though I always swore I’d kill myself if I ever used the phrase ‘in the context of the album’ and must now keep my promise and stick my head in the oven. The thing is, Bobby Womack makes everyone else on this album sound WEAK. He comes back, too - precisely four Old Men of Pop later - on ‘Cloud Of Unknowing.’ The man’s an absolute dude.

But there are a lot of old men on this album. Mark E Smith is one of them - and it is easy to imagine him bellowing his opening line "Where’s north, from ‘ere?" over his shoulder at Russel, in a break from gazing out to sea. I can’t imagine he’s much of a sun-seeker, and perhaps this is why he doesn’t have much to do on the glam and stompy ‘Glitter Freeze,’ but the synths flicker like the needle of the compass I like to think is in his hands. If you can listen to all of 'Glitter Freeze' without a big, daft grin on your face, I give you TEN WHOLE POUND.

On ‘Some Kind Of Nature’ Lou Reed pops up. And he is – lawks! – even older, but Gorillaz have harnessed his doddery and made it charming. Singing deliberately off, half a beat behind Albarn, he sings about how "Me, I like plastics" in the same sort of voice you might use to express a fondness for porridge, and yet it is not lumpen in the slightest; it is very, very jolly, very rinky dink. I mean, the urge to shout ‘Oi! Grandad! Get out of my animated paradise!’ should be strong here, so it is testament to Gorillaz’ skillz that one does not shout it, and instead welcomes these frog-faced Rock blokes with eight, tenticular arms. In fact, I paused at ‘Some Kind of Nature’ and remarked (to precisely no one), how the edifice of Plastic Beach has allowed Gorillaz to get away with making another guest-spotted album that never feels contrived. This is not just a project. Here, Womack, Smith and Reed are like Lionel Jeffries or Vincent Schiavelli. As in, character actors; their craggyness rendered in broad, primary strokes.

Strangely the message of Plastic Beach (in essence: The trees, man) is more explicit, sharper, when the pop stakes are upped. So standing out by country mile on a first listen, and screaming S I N G L E M E N O W, is ‘Superfast Jellyfish,’ which boasts both De La Soul and Gruff Rhys. These people need to do a whole album together immediately. This is also when you realise why Albarn thinks Plastic Beach might be his Most Pop record ever - because it has a chorus that chimes like a Grandfather Clock on springs, it’s a jingle, and it has a touch of the Intergalactics about it. Sampling commercials for food ready to eat "in only three microwave minutes," it installs De La and Gruff as the proprietors of a Krusty Krabs-style fast food joint. It’s the sort of place where reconstituted, padded-out unknowables "taste just like chicken," but mainly, it’s food with a sting in the tail. Either you eating it and feeling curiously unsatisfied ten minutes later, or the people who farm and produce it. Naturally it is possible to ignore the message completely. And I preferred to imagine an undersea thoroughfare that might have Posdnuos’ establishment opposite one run by Tribe Called Quest, who are not selling their world-famously calorific 'Ham & Eggs'.

Gothenburg’s Little Dragon - like Mos Def and Womack - appear twice. First, on the drunken, soppy swayer ‘To Binge’ - with its "plasma screens" kept on "all through the night". But it’s ‘Empire Ants’ – possessor of the shimmeriest, wateriest synths on the record - that’s the standout, at least as far as the gloomier songs go. Bursting out of its despondent chrysalis, it becomes a wonderfully pulsing, throbbing thing. And it mentions "your little feet, working the machine," which is where you might start to think ‘Oooo. This is about child labour. Or Primark, what I hate.’ But again; only if you’re projecting really, really hard, like I was. Here too, it might simply be more pleasurable to focus on just how dreamy the downer moments on Plastic Beach are; as if the sun had bleached them. They sound like how tired you feel after doing nothing by a pool. ‘Let’s do more nothing,’ they seem to be saying. Or at least, ‘Let’s have a rest from all this grabbing, eating, consuming lark, shall we?’

After all the mid-point sadface, ‘Sweepstakes’ fidgeting, itchy and crunchy distortion comes as something of a relief. With Mos Def rapping over some stripped-back production, it barrels along, sparsely propulsive. But it really takes off with the arrival of the Hypnotic Brass Ensemble - their discordant, carnival brass syncopating beautifully wrongly in the background. And at least in terms of pace, it’s downhill from here; a dry waterslide. The trouble is by the time it ends, it’s nearly time to go home again.

And now I am back, washing on, wondering if I want to go back. Well. Were I more cynical, I would say it is strange for a pretend band, who exist in a world without consequences, to be asking us to stop being greedy before it’s too late. They, after all, can pen and ink themselves some nice shiny new consequences, whenever Hewlett is free. But then, it strikes you that there is stealth in it. Because past the pop songs, past the soaring (and let’s not make any bones about it, this album soars in places) this is a supremely clever album. I mean, who better to deliver a lecture on throwaway living than a Technicolor cartoon band? Who better to strip the issues from the hands of the earnest, bearded, dreary proselytizers and make them animate; make them literally sing? The thing is, I went for a holiday in pop. And then, as soon as I had my eye off the beachball; was in fact slurping a particularly delicious bakelite cocktail, somehow Gorillaz floored me with their sadness. And it made me think I didn't yearn for paradise, after all.