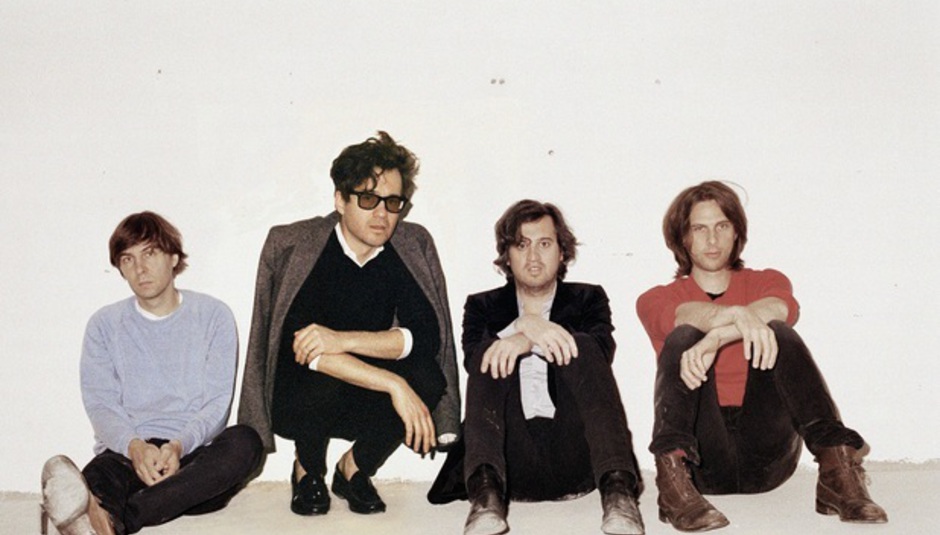 "Pop through a kaleidoscope" - Phoenix on success, Teenage Mutant Ninja Turtles and Bankrupt!

"Pop through a kaleidoscope" - Phoenix on success, Teenage Mutant Ninja Turtles and Bankrupt!

It's Phoenix versus the air conditioning.

It's a freezing cold day in late February, during what has since become known as The Winter That Refused To Die. Given the complete lack of anything approaching spring, and the resultant overheating in our fourth-floor meeting room in Kensington, it's perhaps understandable that we're kicking off our meeting with Thomas Mars trying to get the right balance between boiling Deck d’Arcy and myself alive or trapping us in the world’s smallest industrial wind tunnel.

I've got 20 minutes to chat with half of Phoenix, right at the start of the whirlwind of mayhem that is their campaign for Bankrupt!, aka. The Follow-Up To DiS' Album of 2009 Wolfgang Amadeus Phoenix. Except it's probably not going to feel anything like that when you hear it - at least, not if the band themselves have anything to do with it. The name 'Ludwig von Phoenix' seems to be the Phoenix byword for "the album we shouldn't do!" And, well, Bankrupt! is certainly not that, despite Mars' acknowledgement that "that was the temptation - to do another one like the previous one. So we tried to go as far as possible [away from Wolfgang Amadeus...]."

In comparison to the indie rock stylings of the band's first four records, and even compared to Wolfgang Amadeus..., there's certainly an abundance of keyboards and synths on Bankrupt!. More than that, though, what sets the album apart from its predecessors is the fact that, as Mars describes it, "there's a hostile, aggressive feel to this record - which is not what people are used to, I think. I mean, there's a feeling I get from playing it to friends... I see how confused they are! But after a few listens they seem to like it. But the first listen, it's unusual, not familiar. I think it's a good thing." As Deck adds, "The goal is to do something very different each time, because we hate reproducing the same thing twice. The most important thing is we feel like we've done something different."

The process of creating Bankrupt! started in late 2010, with Adam Yauch (RIP) inviting Phoenix to Oscilloscope Laboratories in New York for three months, a kindness Mars recalls fondly: "He invited us there, and he was so nice. He said 'You can come as long as you like'. It was embarrassing, it was so nice!" It was during this period that most of the experimentation that would come to define Bankrupt! took place, as Mars goes on to discuss: "We wanted that freedom that we could play the most boring song in the world, like the blues in one key, but with the instrument we had that it would sound like us. It was sort of like this Jesus and Mary Chain ambition, that you could play a song that's very simple, but you have so much character. You give it so much personality that's already there."

The band's time in New York, and the time away from France, influenced the album's strong emphasis on nostalgia in more ways than one. Mars recalls how "we started, even without noticing it, we started watching Youtubes of old late-night French TV shows. I made a playlist - it had all the stuff we grew up with, and I guess that's where I started. I'm not sure if it's really influenced us or not on these songs, but it really helped us set the tone, it helped us. Because there's always a mix between nostalgic and... in the sound you want it to be melancholic and nostalgic, and at the same time this combination of futuristic elements that's key for us to be excited."

At the heart of this process of exploration, and of Bankrupt! itself, is a sense of dislocation - both of location and sensibilities. Mars notes that "it's very pop, it's always pop through a kaleidoscope. It's very awkward pop music, like of the 80s or the 70s. What we love is this distance - it's people talking, French people talking about weekends in Rome, or like experiences in Shanghai or something, and they've never been there. That feeling, I think we used."

The lyrical content of Bankrupt! also takes a different turn from Phoenix albums past. In fact, the band have taken to describing the album's lyrics as being influenced by... Teenage Mutant Ninja Turtles. Yes, you read that right. Mars comments that "that's a way to explain the lyrics, because they don't really make sense. They make sense to me, but they make a different sense to Deck, they make a different sense to each [band member]. And that's not saying one's better than the other."

As you might guess from a band who all but outright refused to make the album everybody expected, it turns out that Phoenix aren't big on rules, opting instead for gut instinct. That doesn't seem to be something Wolfgang Amadeus...'s popularity has changed much - if anything, the runaway success has exacerbated it. As Deck explains, "the thing is, it's impossible for us to really understand what we do!

"We base our creative process on random [factors], because... we don't really control what we do, we're not really skilled musicians or anything. So the work is more based on selecting what we like, and when we feel emotion we keep it. But in terms of saying "Okay, we're going to do this today, and it's going to be like that", it never happens like this! It's more the opposite, like rolling the dice and seeing if there's a good combination out of it - if that's the case we keep it, otherwise we just roll the dice again."

Despite this “roll the dice” approach, Mars still describes the band as "perfectionists" in the studio. That said, in an age where fifteen gazillion Youtube views can see a song declared a 'hit' without ever selling a single copy, he also acknowledges that the true value of listening to music might now come from the live experience, with all its inherent flaws. "[When we're performing the songs live] that's how we see if people have connected with a song. Our live show is all about imperfections and mistakes. What's nice is you never know the reaction. There are so many things you can't predict, that makes it exciting."

In fact, Mars thinks there’s an added value as a music fan in the inevitable imperfections of playing live, and listening: "Yeah, that's the best thing. Even when people misunderstand totally. Even when people make the biggest mistakes, when they get the lyrics wrong, sometimes it's better than what the real lyrics are! And you hear, even live, you see people lip-syncing to the song and doing it wrong, so you get 'They thought it was...' - sometimes it's better!"

Bankrupt! will likely create some more imperfect perfect misunderstandings. They might make rational sense, they might not, but so long as the feeling is there it doesn't matter. After all, Mars remarks that the Teenage Mutant Ninja Turtles aren't exactly known for their logical existence either. "They don't make any sense! They're named after Italian Renaissance characters! They're ninjas! Their master is a rat! They're mutant turtles - that's probably the best part!"