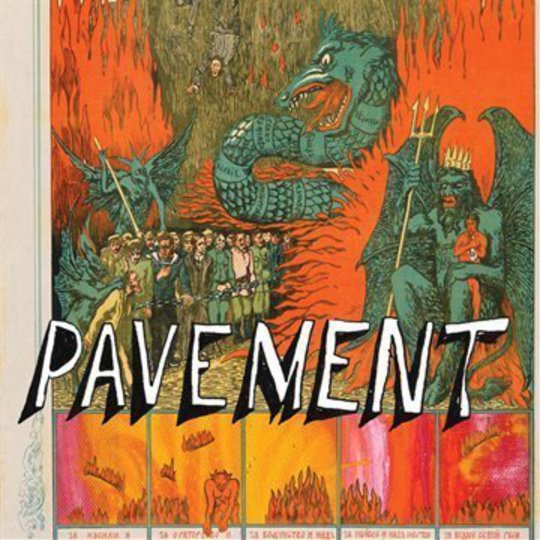 Thrust blinking into the cold light of iTunes by a new ‘best of’, the fear is that Pavement’s star might somehow struggle to cast its sputtering glow with quite the kaleidoscopic luminance it did in the mid-Nineties. But, even though Quarantine the Past threatens self-parody with its engineered deformities, the fear soon proves a deeply irrational one.

This is a surefooted but defiantly lopsided collection, unabashed at the few glaring omissions which are inevitable on any Pavement retrospective weighing in at fewer than, say, 50 tracks. Rather than trying to please everyone, Quarantine... serves up a hearty - not bacchanalian - 23 songs. You might think of it as the first volume of memoirs from a writer who may well not get around to penning a second.

Content is largely drafted in from the more bombastically melodious end of the Californian wonk-rockers’ spectrum, and fails to adhere to anything as tedious as a chronology. ‘Gold Soundz’ sighs and shimmers on the starting grid, with Watery, Domestic EP stand-out ‘Frontwards’ applying cautious throttle as we pull away, gathering speed. Soon Slanted And Enchanted is occasionally barging its way between the jostling bumpers of Terror Twilight and Wowee Zowee, then falling back to make way for nagging representatives from Crooked Rain, Crooked Rain and Brighten The Corners. It’s pretty much a free-for-all by now, fuelled by a shrugging conviction that we’ll get wherever we’re going in time, if not necessarily intact.

What Quarantine... lacks in etiquette, it more than makes up for in spirit. Things are already starting to fizz, flutter and fray around the gleefully un-buffed edges as we clatter into ‘Mellow Jazz Docent’ and then ‘Stereo’, a particularly chafing lucky dip of rudderless basslines, spoken word verses, bossa nova Casio beats and laceratingly distorted slacker choruses. ‘In The Mouth A Desert’ follows hard on its heels as a near-seamless companion piece, ensuring that we’re all cross-eyed and swaying by the time ‘Cut Your Hair’ provides the first of Quarantine...’s bona fide celebrity appearances.

‘Shady Lane/J vs. S’, ‘Summer Babe (Winter Version)’, ‘Trigger Cut/Wounded Kite At :17’, ‘Range Life’ and ‘Grounded’ all poke their artfully tousled heads in at various points. The latter, bruised and elastic, charts arguably the greatest emotional depths on the whole record, although ‘Heaven Is A Truck’, ‘Spit On A Stranger’ and ‘Here’ make only slightly more languid bids for the crown. These gentler moments are dotted amongst their more spastically snake-hipped brethren; tantalising stepping stones leading us ever further out across a trash-strewn, weirdly effervescent river.

Eschewing any strict chronology unburdens Quarantine... of the usual ‘best of’ tendency to chart career development, freeing the tunes up to mill around making their own bleary-eyed observations about their place in the wider Pavement canon. Stephen Malkmus has picked a good range of songs for showcasing his trademark fractured vocals, leaping from stoner drawl to feline howl and back again, although the general focus on Pavement’s more aggressively cubist moments could leave newcomers feeling a bit buffeted. Not necessarily an ideal jumping-off point for the uninitiated, then; Wowee Zowee is probably still the best option on that front, with Crooked Rain, Crooked Rain a close second.

There’s no ‘Carrot Rope’, no ‘Kennel District', no ‘Silence Kid’ and no ‘AT&T’ to be found here, so a second volume would clearly be feasible. More or less any other 23 Pavement tracks would make about as much sense as a compilation, and be just as good, as the 23 chosen here do and are. Quarantine... feels as though it’s been deliberately thrown together so as to resemble a semi-arbitrary trolley dash through the noisier aisles of Malkmus and co.’s back catalogue, rather than a scientific attempt to extract the band’s precise DNA and trap it in amber for posterity.

In other words, it’s exactly what a Pavement retrospective should be - a heavily slanted, palpably enchanted slab of richly flawed anarcho-pop. Whether or not you agree entirely with the final selection, every track here is skewered on the band’s jagged refusal to bore; the same rickety backbone that makes each of their full studio albums to date such a valued companion for fans of angular, slippery, fiercely organic racket-making everywhere.