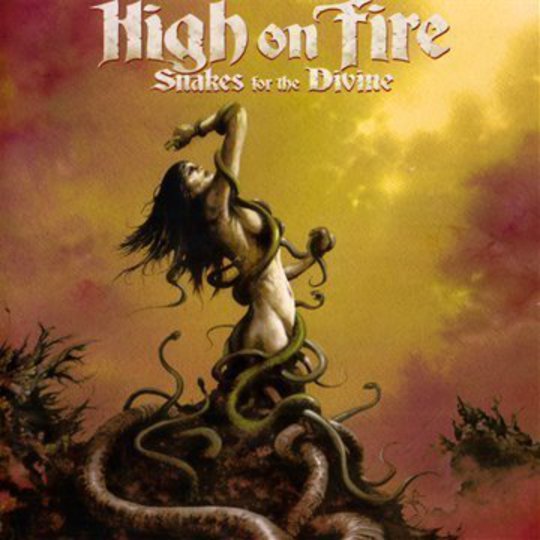 What would the Matt Pike of twenty years ago, a teenager in a crusty metallic hardcore band called Asbestosdeath, have made of his adult incarnation’s band High On Fire – most specifically, their decision to sell the ‘complete’ eleven-song version of their fifth studio album Snakes For The Divine exclusively in monolithic US chain store Best Buy? It’s not a rhetorical question; heck, he might admire grownup Matt for his attempt to weasel a few more sheets out of The Man in exchange for not much. It does, however, lend weight to the notion that High On Fire, a Californian trio who have unleashed some quite superlative heavy metal across the last decade, are at a crossroads as regards their career, and their potential future excursions.

Now signed to E1 Music, formerly Koch, in the States – a major label but for only the most spurious technicalities – and licensed to huge European metal imprint Century Media, the band's knobs were twiddled by an appropriately big-buxx producer. People who know Greg Fidelman from his work on Metallica’s Death Magnetic, which he’s widely considered to have made a pig’s ear of, will be pleased to hear that he hasn’t managed to quell the raging beast flowing through HoF’s cables. Given that their previous three desk jockeys were Jack Endino, Steve Albini and Billy Anderson, though, he hasn’t really filled those sizeable shoes. Des Kensel’s drums sound flat, Jeff Matz’s bass sometimes indistinct; the tactic of placing Pike’s vocals higher in the mix pays dividends, but broadly speaking, this album is good because of the people who played on it.

If this constitutes a shot at the stratosphere, is it likely to be futile? Part of me suspects there is an inbuilt limit to how big HoF could realistically become. They are not innately marketable, at least not to a wider metal public; their loose image of ordinary Joes seems to be sincere, ditto their lack of naked ambition beyond being able to do this for a living and having fun doing it. Yet it’s hard to listen to Snakes For The Divine and not experience flashes of contemplation about how sweet it would be if this trio became serious-business unit shifters. Pike, for one, has a certain iconic aura about him, as well as (and as a result of) being at the absolute top of the tree in terms of innovation and sheer FORCE in the medium of heavy metal guitar playing. Moreover, they write incredibly hook-filled and catchy songs – objectively, no less so than Metallica or Slayer on their respective first three albums, and certainly no less so than more recent mainstream graduates like Lamb Of God or Mastodon.

The album opens with the title track, which itself begins with a palate-cleansing burst of unaccompanied Very Metal guitar wheedle; its swift transformation into a crusted beefsteak of a Mötorchug is no great surprise, but handled with a rare finesse. Pike still appears to be using Lemmy and Jerry A from Poison Idea as his dual vocal blueprints, and longterm HoF fans may wonder if the lyric “Ten thousand years are left behind” is self-referential. ‘Frost Hammer’ represents the band at pretty much peak performance, and one suspects it’ll become one of their definitive songs in time. The drum rolls are punkishly frantic and the guitar breaks would make any of those endearingly backward-facing ‘true metal’ bands highly envious.

A rare ‘slow one’, before the introduction of an heroically histrionic solo at any rate, entitled ‘Bastard Samurai’ doesn’t strike with quite the same venom as the speedier rippers on Snakes For The Divine, although the guitar tone employed by Pike as he enacts those lumphammer riffs retains the thrill factor. That it’s immediately upended by ‘Ghost Neck’, probably the album’s most hardcore-like moment, suggests HoF know that while people came to them partly due to their doomy ancestry (Pike’s tenure in cannabinoid-hailing legends Sleep), ultimately they stayed for the whiplash-inducing bangers. That said, ‘How Dark We Pray’ conveys a flagrantly doom-ish mood, of the faster Saint Vitus/Angel Witch kind, and is still a corker.

High On Fire’s development, for want of a better word, has a lot to do with extraneous factors – their new label, the slightly icky marketing deals they’ve arranged and those aforementioned production wrinkles – and very little to do with what happens when three gentlemen rain blows on their respective instruments. Which is to say that although this doesn’t quite scale the heights of their two previous LPs, Death Is This Communion and Blessed Black Wings, it shouldn’t be thought of as a point of no return. As ambassadors for metal, they remain near-peerless.