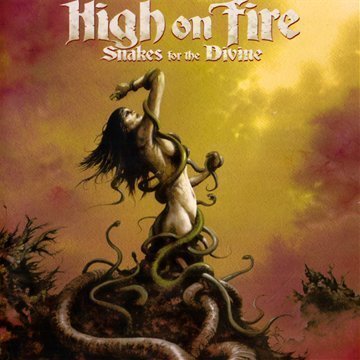 High On Fire - Snakes for the Divine

Although this doesn’t quite scale the heights of their two previous LPs, Death Is This Communion and Blessed Black Wings, it shouldn’t be thought of as a point of no return. As ambassadors for metal, High on Fire remain near-peerless.»

oakland, california-based power trio high on fire release its long-awaited, fifth studio album, 'snakes for the divine' via e1 music. the follow-up to 2007's 'death is this communion' was recorded at the pass studios in los angeles with producer greg fidelman. 'snakes for the divine' is high on fire's magnum opus, capturing every nuance of the legendary band's ongoing musical progression and evolution into one of heavy music's all-time greats. sharper, faster and darker than anything the group has ever recorded, 'snakes for the divine' is an unrelenting tour de force, showcasing cult guitar hero matt pike's utterly unique and inventive musicianship and the band's epic, thundering sound. premium production by fidelman - the man who produced slayer's 'world painted blood' and is mixing the upcoming metallica live album - boosts high on fire's strength and power while blackened lyrical tales of ancient wars, frozen planets and doomed societies emerge from pike's bellowing barks and throaty war cries. from the moment the leviathan-like title track explodes to kick off the album, it is immediately evident that high on fire is determined to push modern heavy metal into new and uncharted realms.
description from www.roughtrade.com