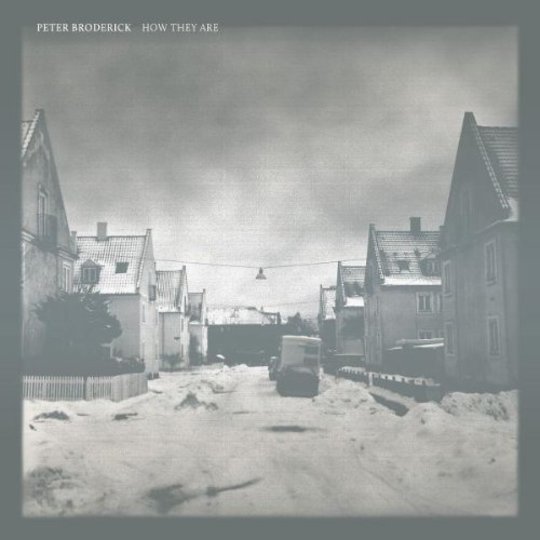 “There is something we're all stuck with, and I have tried to point it out” – so goes the main hook of How They Are's opening song, Sideline, and it's so direct and simple that you won't at first reckon with its full power. Wait a minute, however, and you'll find that it's stuck with you, that its meaning is quickly evolving and expanding. After all, isn't this what all writers – songwriters or otherwise – are trying to do? To put into words some shadowy truth that's common to everyone? The 23-year-old Peter Broderick sings this lyric so painlessly and casually that it's like it's no big deal; but with it, he sets the tone for a record that holds a magnifying glass over a number of shared feelings and subjects them to his customary level-headedness and clarity of insight.

Apparently, How They Are is a sort of 'stop-gap' record. Midway through putting together his major follow-up to 2008's Home – though he's released a dance score, four-track recordings and various outtakes since then – Broderick had to postpone three months' worth of engagements because of a persisting knee injury and head home to recuperate. (That 'proper' album, a close collaboration with Nils Frahm, is to be released in 2011.) While resting, he made notes and sketched poems – which gradually, with the help of a computer, piano and guitar, became songs (the first time the words have ever come before the music, he notes). He recorded 11 of the 13 pieces in one day at a studio in his home state of Oregon and chose the seven that seemed to stand out. “I think I'm just taking a step back before taking a step forward”, he says of the resulting mini-album's stripped, almost ascetic sound; but I wouldn't say that. I'd say it's more like what happens when you take a sidestep out of life's ever-pushing-forward-ness; when you remove yourself, even if only briefly, from all that motion and production, and take a good look at everything you'd normally discount as peripheral.

Like leaving an ink spot on blotting paper, Broderick offers just one image, describes it sparsely, and then leaves it to accumulate meaning. Take the second track, 'Human Eyeballs on Toast': as the piano notes of its extended introduction rock back and forth 'til they become a whirlpool in slow motion, a living, respiring pattern that swells and diminishes repeatedly, you become so quietly hypnotised that by the time Broderick begins to sing, the upsetting image he delivers is like a white-hot branding. “Feathers and a cage too small”, he goes. “Chemicals that make us tall too fast, too fast. All my friends look the same, all of us feel the same pain – always pain”. The narrator – a chicken, in case you hadn't guessed it (and you don't at first, which is why it's so bemusing and then unsettling when you do) – imagines what it would be like to turn the tables and eat his human captors for breakfast; but then laments “When they sear off my beak, I realise how weak we are”. Broderick might be singing about battery hens, but if you wanted to anthropomorphise, it wouldn't so difficult.

It's impossible to listen to How They Are when making your own noise, and it seems inappropriate to put it on unless you're alone; it demands that you wind down and fall in line. 'Guilt's Tune' is a a little reminiscent of Max Richter's The Blue Notebooks, with its resigned, speak-sing vocal – and its resonant guitar and piano, though minimally played, are somehow capable of overflowing the room.

These songs have a nostalgic air, but they're never indulgent or despondent. (“I'd had enough, so I went on home to the place I was raised, to my younger days”, Broderick sings on 'With a Key', but it feels like it's out of choice – rather than desperation for comfort – that he's decided to revisit the past. He's not necessarily looking for answers; he's just dropping by, observing.) The album as a whole doesn't profess to do much more than open up a space, a depth, in which memories can carefully reassume potency, can present themselves for inspection and be looked at from a safe distance. And despite its solitary air, it's not melodramatic or demonstratively mournful; it's comfortable with bleakness, OK with sadness, contemplative rather than regretful.

In all, these conciliatory, forgiving lullabies are gestures of understanding for the softly lonely and lethargic. This is bare-boned, blanketed music for times so late at night that it's early in the morning – music that says it's fine to just sit, rather than do – and it confirms something that many of us have been suspicious of for a while; that Broderick, able to turn his hand to various methods of composition but never lose his distinct emotional colour, prolific but not without care, is one of the most involving young musicians around right now. Take him to heart.