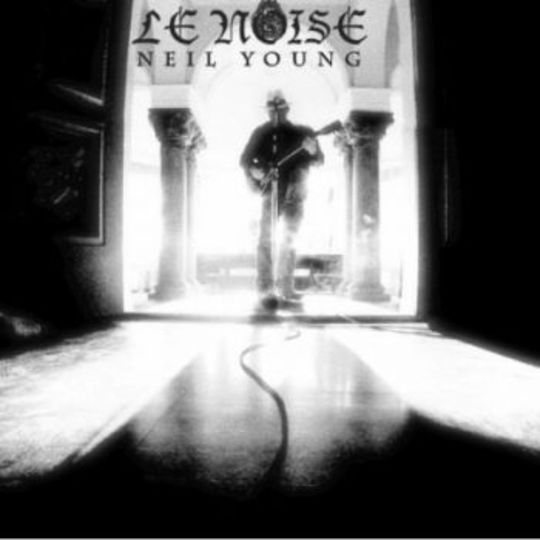 When you’re an established artist that’s made well over 30 albums, it would normally be pretty difficult to avoid repeating yourself – unless you’re Neil Young. A man who has changed direction more times than most acts have changed their line up, Young has interspersed his regular jaunts into singer-songwriter territory and sludgey proto-grunge heaviness with electro dabblings, concept albums and avant-garde noise.

Therefore, the announcement of a new record is usually then accompanied by a dissection of just what it might contain. What Neil Young is going to turn up here – eco-warrior? Sedate country-rocker? Grumpy old rumbler? Surprisingly, given advance reports, Le Noise finds Young in genuinely new territory. Recorded with well-regarded producer Daniel Lanois, trailed on a solo acoustic tour and following the garage-rock fumble that was last year’s Fork In The Road, all signs pointed to Le Noise being one of Young’s gentler, more introspective records.

It’s certainly reflective, and is performed by just Young and his guitar, but it’d be foolish to classify Le Noise as a singer-songwriter record. Instead, it’s like hearing a fuzzed-up, full-throttle Neil Young without a band, his guitar turned up to 11, screaming from the speakers, but accompanied by nothing but the Canadian’s needle-thin vocals and swirling, phased effects.

It’s surprising, difficult and initially quite unsettling, like listening to some demos that have been given a quick polish by an uninterested producer. It certainly doesn’t help that two of the weaker tracks kick off Le Noise, ‘Walk With Me’ and ‘Sign Of Love’ signpost the album’s heavy sound without offering much in terms of melody or lyrical excitement.

It’s only with the hypotic rhythm of ‘Someone’s Gonna Rescue You’ that Le Noise becomes clearer. The producer’s swirls of sound summon up images of dark, troubled nights, Young’s lamenting voice somewhere in the midst, sounding distant and restless.

Followed by ‘Love And War’, the guitars turned down and the vocals up front and intimate, and any initial doubts about Le Noise start to diminish. Like most of Neil Young’s best songs, the lyrics on ‘Love And War’ sound trite or simplistic written down, but in his hands become earnest and honest. Alongside the epic ‘Hitchhiker’, it’s an album highlight.

The latter track is part of Young’s back catalogue that’s been dusted down after years in a cupboard somewhere on the singer’s California ranch, and is the song that most NY obsessives will be examining. Turning the guitars back up again, Young tells an epic autobiographical tale, listing all the drugs he’s ever taken, lamenting some of the decisions he’s made and taking one of his regular diversions into the world of time travel and space aliens.

Compressed into five and a half minutes, ‘Hitchhiker’ is a remarkably strange song, and reminds us again how Young stands apart from the other elder statesmen of rock. While his supposed contemporaries are recording covers albums or rehashing their back catalogue, Young is reflecting on his own past in this unusual, vibrant way.

With just eight tracks, the acoustic epic ‘Peaceful Valley Boulevard’ and the stomping ‘Rumblin’’ closing the record, Le Noise is a sharp shock of a project. Even for existing Neil Young fans it sounds strange – rootless and untethered, emotionally very melancholic and reflective but with such an aggressive musical edge. It’s hard to listen to any Neil Young record without considering the man’s musical past, and even more so with this album, as it’s doused in his history and his ethos of exploration. It’s not a completely successful experiment, but Le Noise is certainly an important moment in Neil Young’s ongoing story.