Antony And The Johnsons 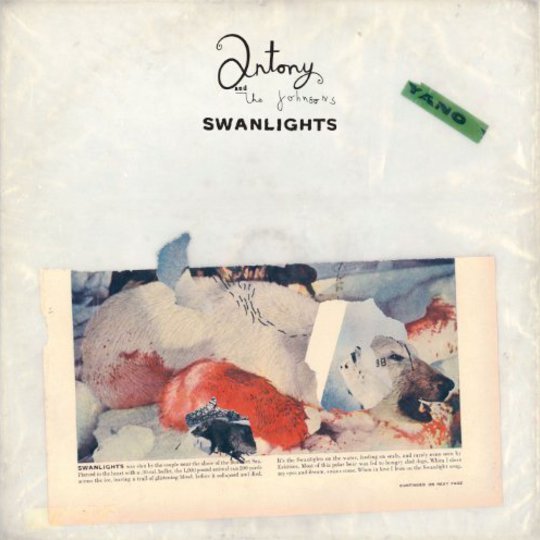 Antony Hegarty has only amassed a slim discography in his 12-year stint in the musical spotlight with Antony and the Johnsons, but the emotional gravitas of that work casts a long shadow over anything that follows it. His 2009 album, The Crying Light, was an invigorating intertwining of gender politics and environmental themes, but Antony has made the step of broadening his pallet this time, ultimately producing a less concept-heavy set of songs. Familiar themes still surface, with the natural world continuing to loom large in Antony’s conscience, but much of Swanlights is ambiguous and less easy to decipher. It’s essentially a set of love songs penned to an unknown object of his affections, all set to the deathly minimalism of the Johnsons, whose work beautifully atrophies over time, coming ever closer to devolving into dust with each passing recording.

Swanlights begins with Antony pulling a familiar move out of his bag, by rolling the title of ‘Everything Is New’ around his mouth a few times and hitting on that trick of repeated lyrical mantras that have become a familiar staple of his work. The naked simplicity of the lyric neatly buffs up against the rigid passages in the song’s arrangement, which ranges from plinked piano to great swells of strings and brass, allowing Antony to wail and moan and fall into formless noise just to test out where his range will take him. This is a point that Antony often returns to in his work, where he lets his voice corrode the expected boundaries of vocal expression, making it feel like he has loosened all hold on common articulation and lost track of himself in the process.

To reach such a glorious high so early in Swanlights certainly sets the bar high, but Antony’s fearless approach to his art often forces him to continually outpace himself. That skittish preponderance for matching vocal formlessness with austere musical order surfaces sporadically throughout, providing the invigorating high points on this set of recordings. Antony’s shrill cries are mixed just below the surface on ‘The Great White Ocean’, which finds him veering close to Tim Buckley’s unsettling baritone jazz-folk workouts from Starsailor, while ‘Ghost’ returns intermittently to those cyclical vocal patterns, where words are repeated, then added to, then tail off into an impossibly high frequency falsetto at the close. Much of this material isn’t bedded down by a common musical thread—‘Ghost’ lurches from the hushed guitar plucked ardor of ‘The Great White Ocean’ into forceful piano jabs, which are reminiscent of John Cale’s playing on his and Lou Reed’s 1990 concept album for Andy Warhol, Songs For Drella

Occasionally, Antony and his band will float close to trad musical arrangements. ‘I’m In Love’ and ‘Thank You for Your Love’ both ebb and flow via soulful stabs of organ, with the latter gaining a rusty traction via gospel tinged horn parts. But Antony’s performances always anchor such songs somewhere away from the norm, mirroring the work of Roy Orbison, whose music was steeped in the rock & roll tradition and then lifted into far more abstract territory by his quixotic vocal delivery. The centerpiece of this album is the title track, in which the Johnsons make an all-too rare return to working with drones (see the monolithic final third of ‘Hope There’s Someone’ from I Am a Bird Now for their greatest use of this form) via the eternally repeating distorted guitar motif that continues to fold back on itself for three-quarters of the song.

‘Swanlights’ is both light and dark, with Antony crooning about seeing ”faces in my dreams” before coming to terms with such apparitions, causing the song to swing into airy, upbeat territory. It’s a perfect reflection of this album’s tendency to fracture off into subtly different directions, from Antony’s signature piano balladry to diversions into quarter-paced takes on Stax traditions. This urge to push and pull Antony’s vocals into other terrain has contrasting results—he sounds perfectly at home on the somber ‘The Spirit Was Gone’, but less so when a dense force is in the room, such as the compact and busy arrangement of ‘Thank You for Your Love’, which causes him to sound like he’s straining to be heard over the blaring sax and trumpet codas to the track.

The duet with Bjork on ‘Flétta’ is likely to push much of the attention away from the rest of Swanlights, but it’s one of the slightest songs here, with the Icelandic singer dominant throughout, but slipping into an auto-pilot performance that doesn’t add a great deal to the overall picture. Again, it feels like Antony is a distant voice struggling to be heard, his apparent happiness to take a back seat blurring the overall vision for the album out of focus, making it pale in contrast to the conceptual ferocity of the two records that preceded it. The decision to team up with Bjork again is a questionable one — previous Antony and the Johnsons albums felt like a perpetual forward tread, where traditions of minimalism and repetition were destabilised, manipulated, and pummeled into a future space that felt refreshingly incongruous. But ‘Flétta’ simply feels like more of the same. Not bad as such, just lacking in the fearlessly reinventive approach to Antony’s art that we’ve become accustomed to from him.

Thankfully, the closing ‘Christina’s Farm’ almost makes up for it, with Antony again turning to the animal kingdom (kittens, turtle doves, flamingoes, owls) and religious imagery (the Virgin Mary, halos). He also invokes vocal repetition to unshackle himself from the world once more, to reach that sweet spot where it feels like he’s lost in the middle of the great dust storm of strings and piano billowing up around him, where he becomes the focal point for this music and utterly abandoned to it at the same time. It’s a sensation that fans of Antony’s other work will be more than familiar with, but it only surfaces sporadically on Swanlights, which ultimately feels like a slower turn of the wheel compared to the great leaps and bounds made on I Am a Bird Now and The Crying Light. It’s still an album that contains peerless highs, particularly when Antony surrenders himself completely to songs like ‘Everything Is New’ and ‘Swanlights’, but a more dynamic reconstruction of the Johnsons’ core sound would be most welcome next time around.

For the Ghosts Within