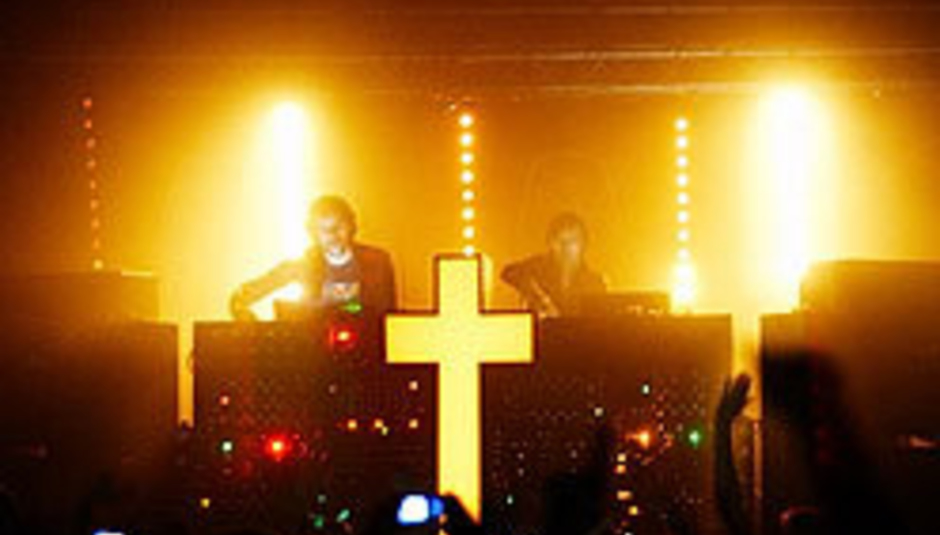 Five of us are reclining in the tight caverns of London’s Koko. Gaspard Augé and Xavier de Rosnay are telling the Observer Music Monthly that they’re not giving their readers any steer on hometown nightlife. Petulant? Perhaps it’s the red walls and a lack of caffeine that’s making them spar. That or they’re playing bouncer for a seedy, cherished, clandestine demi-monde.

Nah, they say. It’s just that Paris doesn’t have the clubs to step out to. And even if there were, the twenty-something duo talk like they’d rather be at home reddening their eyes in front of GarageBand.

Question: what drove you to make the record? “Just because we were kind of like... geeks,”_ offers Gaspard through a thickening fugue of fag smoke. “We had to find a way to talk to girls.” He recommends me to the window, gesturing at the smoke detector on the ceiling.

I know you said earlier that there weren’t many places to go out in Paris – do you think that helped in a way? That you ended up staying in and smoking and writing tracks rather than going out? A lot of dance albums, when you play them back at home they don’t sound very good, but yours sits well just to listen to.

Xavier: Club music is something we discovered really late, when we started to DJ really. It was never open to us before. We are just trying to make pop music but with the tools of today – because the tools of today make it sound modern and also allows you to make everything from beginning to the end. There are reasons why it sounds electronic but our main concern is just to make music you can listen to at home or in the car…

So when you say that… imagine maybe if you were around in the ‘60s - you wouldn’t use electronics? Maybe you’d’ve picked up guitars instead? Made pop that way?

*X:* I think if we had the possibility of working with a musician - if we had a big studio in Paris for a few months, I think we would just make like West Coast pop music. Like Steely Dan or Billy Joel… If we had infinite possibilities we would end up making this kind of pop music.

Quelle surprise, Billy Joel. Couldn’t tell it was your fire raging in this beast’s belly. Draw back, try another oft-given gauge…

I remember you mentioned Bad Brains earlier [in the OMM interview]. Did you grow up listening to hardcore punk or anything like that?

*X:* No. I think that sound is just a reaction after recording ‘We Are Your Friends’. Pedro Winter (AKA Busy P, Mr. Ed Banger) said like, “Okay guys, it’s been a long time now so maybe you should make another EP”. And he said, “I’ve booked a recording session for one month, that means you have one month to make your next EP”. We thought: Okay, we have to make something – it doesn’t matter if it’s less successful, because maybe, probably, we’ll sell fewer records – but we have to make something that people would notice and remember [us] by.

And that’s why you went for that aggressive, tough…

*X:* Yeah. Also, before we were playing regularly we were using that distortion to cover up a lot of mistakes. Now we’re playing more and getting better.

While the guttural synth and knife-happy production that grazes Justice’s debut record (review) continues to collect admiration in fresh sweat and pheromones, it has also drawn an amount of sniffling from more wizened quarters. Those with ears tuned more to skill than sentiment have seen through a few cracks in the sheets of noise and raised hands to tell the tale.

You say you don’t come from a dance background - have you encountered much criticism from the dance community?

*X:* We are a target for criticism from many type of person – obviously for a techno purist and stuff like this, they don’t like that… we don’t try to educate people. We just like to make people dance, and I understand if this makes them angry. We are also a good target for… y’know, like they say the first person who loves you, the two after will hate you? But this is something we’ve been prepared for since the beginning because we know the process of to love and then to hate. And we used to do the same, at high school. We cannot be angry with these people because it is a natural process – that’s one reason we stopped reading reviews on the internet because it’s impossible to ignore.

I think a lot of reviews on the internet have been really positive...

*X:* Yeah, but there are also a lot of bad ones. At the beginning we used to check for feedback or what – but now it’s just like fake, it’s impossible to… but once again I understand totally why people hate us.

From here, the conversation dives into a discussion on French pop, and Augé and de Rosnay’s appreciation of it. Their traits as an act echo those of foregone Gallic luminaries – contrary and almost stubbornly not cut to type. Justice are rockers who didn’t like to rock, dancers who never raved ‘til they DJ’d; carriers of Christian effects into dens of inequity like Koko. Self-confessed, home-bound geeks flown to rock and fashion’s glossiest pages.

That idiosyncrasy works at levels most obvious in Gainsbourg, though the names cited this evening are François de Roubaix, Vladimir Cosma and Francis Lai. And, despite an alleged dedication of single and standout album track ‘D.A.N.C.E’ to Michael Jackson, they’re proud of music they see as nearly lost at the expense of Anglo-American imitation. Imitation that can’t draw on the _“stronger music history” of Britain or the US that allows, they say, bands like their friends Klaxons to plunder, re-appropriate and excite sections of support from dance kids, rock kids, pop kids._

*X:* Most of the French people, they really hate what was done in France in the ‘80s and are really not proud of the typical French music because it started to sound more like American hip-hop or something like this. French kids they have one thing they like so they just stick on it. So many musical styles are coming from the UK – when you compare it to France – apart from the pop music, which is really special…

But what I’ve heard of that is very much ‘French’, it doesn’t try to take too much from American or English…

*X:* Just a piano and a voice, there is no personality or whatever.

No personality, no rhythm, nothing interesting about it.

*X:* And what people saw is French hip-hop, but this is just a bad copy of American hip-hop.

de Rosnay will worry less about copy-cat hip-hop and Blunt residue now - any swing that had on the trade corridors out from France has been hijacked by the pirates at Ed Banger; a one-label armada taking dancefloors global. At the galleon’s helm and head of the vanguard is Pedro Winter, flagged earlier in this feature. Pedro’s been busy fostering an export packed and branded with the Tricolore – Justice, Medhi, Oizo, Vicarious Bliss, So Me, SebastiAn, Uffie, Feadz: all young, casual arrogants; motley fluoro, star-tipped hedonists.

How important is Pedro Winter to Ed Banger and this wave of Parisian music?

*X:* He’s really involved in everything… he was like a DJ at the start and he’d play club nights on the condition that we could play too. We played in Australia last year, it was just Justice y’know, Pedro was coming with us [as part of the label] – but six months after everybody has forgotten us and just talks about Pedro. He’s a real character. I think he has a really strong presence.

You talk about Australia and you’re about to go all over the world on tour. Where has the best crowds?

You don’t have to say that…

*G:* No, it’s funny because we get asked that a lot, but it’s London I think…

Which city has the best girls?

The night will go on to see a typically acerbic, typically fierce set from Justice (review), who pack the balconies, bars and floors of the old Palais out from wall to wall. The hour-long mix trips over itself at points, rhythms barging _sans grace into each other, but on the whole it goes down rapturously. These things are to be expected, too, from an act that only made their live debut two months ago on the Sahara stage at Coachella. Before the freshest sweat and pheromones there’s time for one more question._

People wonder if you’re Christian, because of the cross. Are you?

*X:* Yeah… yeah. 90 per cent of the French population is Christian. I think people might get confused, y’know, and see the logo of Justice and it’s the logo of Jesus Christ.

Do you think in the future more people will come to associate it with Justice than Jesus?

*X:* Ah, we’re not going to make the same mistake of saying we are bigger than Jesus Christ!

Yeah... yeah, sorry… I shouldn’t have tried to trick you into that, should I?

‘D.A.N.C.E.’ – The Remixes is released via Ed Banger on September 24. The band’s MySpace can be found here. Check the site for all forthcoming tour dates in Europe and the US.