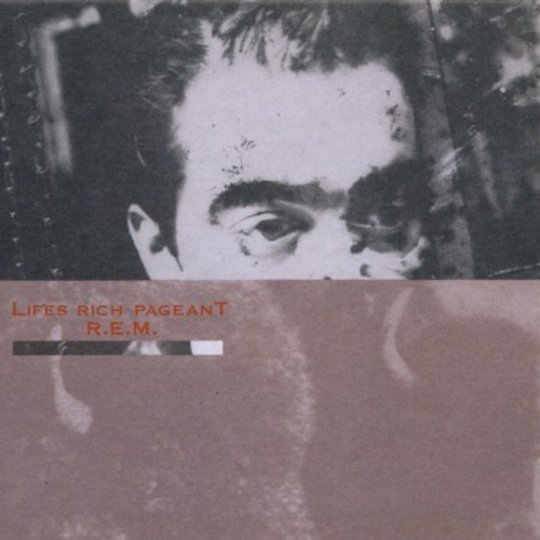 The received wisdom on REM’s fourth album Lifes Rich Pageant is that it represents the moment that the critically doted upon sons of Athens finally manned up and stopped being so obtuse. And it’s true that the songs are rocky, major key and propulsive, that Michael Stipe’s vocals are full throated, that his lyrics are largely discernible, that the band mostly slough off their folk trappings, that whatever dickhead argument you’re going to trot out, it basically sounds like ABBA Gold next to the murk of Fables of the Reconstruction.

But it’s also a record whose peculiarities run considerably deeper than that maddeningly absent apostrophe in the title. Or the fact that it’s the only album I’m aware of that has an entirely inaccurate tracklisting (bar 'Begin the Begin', which is down as track one, everything else is either in the wrong order or not actually listed).

Stipe has always said he found the process by which big time Eighties producer Don Gehman pressured him to sing 'properly' traumatic, that he wasn't ready for it yet. Which sounds precious, but there is something very transitional about Stipe’s contribution to Lifes Rich Pageant. Even at their most cryptic, the lyrics on subsequent records were clearly written to be heard. That's not the case on ...Pageant's predecessors, or here. The noisy foregrounding of Stipe’s daft lyrics on the likes of ‘Hyena’ and ‘I Believe’ gives them a goofiness that replaces the oblique, sepia spirituality of earlier work. Combined with the album’s helter skelter pace, the giddy swathes of organ - added simply because the band stumbled across one at the Indiana studio – the overt silliness of some songs (‘Underneath the Bunker’, ‘Superman’) and the fact that others (‘Hyena’, ‘I Believe’) were old party tunes, predating even Chronic Town, and you have what is probably the funnest, flippest album in the band’s catalogue.

For all that, it’s always struck me that the general good vibes, burgeoning FM friendliness and a phenomenally strong bunch of songs at the start has led to the quality of Lifes Rich Pageant being slightly overstated. Let’s not get bogged down into criticism here: it’s still a wonderful album. But if every track off their first three albums and Chronic Town is probably the favourite song of someone, somewhere, it’s hard to imagine that to be the case here. It's a fiercely urgent record, but that's partly because it was recorded in such a rush, old songs dusted off because the band hadn't finished enough new ones. The second CD of this reissue bears that out: the 19 demos on offer here are noticeably sketchier than the ones on the Fables... reissue, with tracks like ‘Cuyahoga’ and ‘King of Birds’ near-instrumental. Incomplete and lacking the giddy chutzpah of the studio versions, the bonus material is stodgy and largely inessential, though the eerie ‘Two Steps Onward’ (better known as ‘Theme From Two Steps Onward’) is a real keeper if you don't have it already.

Returning to the record proper: several of these songs are still concert staples, and if this remaster of an already cleanly-recorded record isn’t drastically different, the rocky songs gain an added hardness that brings them a little closer into line with their punchy live incarnations – Bill Berry’s whumping drums and Peter Buck’s screeching guitar on ‘Begin the Begin’ are particularly gratifying here - and as with all these reissues, Mike Mills' backing vocals are that shade clearer.

The first four songs are nigh on perfect. ‘Begin the Begin’ may have the air of a first track written to be a first track, but it’s also rich, strange and powerful, Stipe’s voice a primal rumble defiant of Gehman’s attempts to coax clarity out of it. The surging racket of the music and madcap howl of Stipe’s voice largely obscure the lyrics, but the song’s sheer, seething elemental energy gives lines like “the insurgency began and you missed it” an air of exuberant menace that goes beyond whatever literal meaning you might care to pull from the words (“a philanderer’s tie, a murderer’s shoe”, runs the chorus, bafflingly).

‘These Days’ is more conventional and gains its power from that, Buck’s metallic guitar line snaking out like a harpoon as a startlingly lucid hail of lyrics shower from Stipe's guts. Sheer, kinetic energy is part of the appeal, but there’s a sense of gravitas and danger here that foreshadows their next few records. Again, it’s hard to say what the song means, but agit-proppy hook “We are young despite the years, we are concern, we are hope despite the times_” feels like a statement of intent that's taken up by the next couple of songs.

‘Fall on Me’, then, is astounding, a surreal, Falkner-esque ballad about acid rain in which Stipe and Mills’ vocals entwine like glittering spirals of mist, twisting and soaring and evaporating in a haze of gold. It’s almost impossible to write about the ills of the planet without sounding like a sanctimonious douche, but Stipe’s sad, weird lyrics and the sheer, jaw-dropping beauty of the vocals mean that the song’s moments of clarity - “buy the sky and sell the sky and bleed the sky and tell the sky” - devastate. It’s one of the decade’s musical high watermarks, and if ‘Cuyahoga’ doesn’t quite scale the same heights, it’s only by a fraction, a luminously sad folk rock lament for the polluted Cuyahoga river (“we burned the river down”) and the ruin visited upon the First Nations by colonisation (“Rewrite the book and rule the pages, saving face, secured in faith, bury, burn the waste behind you”).

After that, the intensity lets up. ‘Hyena’ opens with Stipe’s impression of an actual hyena, and his joyous chattering signals Lifes Rich Pageant’s shift into a sun-dappled romp through cheerier pastures. You’d be hard pressed to say anything else – bar the short, crypic, beautiful ‘Swan Swan H’ – really constituted the best REM could do. But the momentum and joie de vivre is intoxicating, and unlike many a transitional record, it’s a genuine hoot, an unexpected blast of sunshine between the darkness of Fables… and the fires of Document.