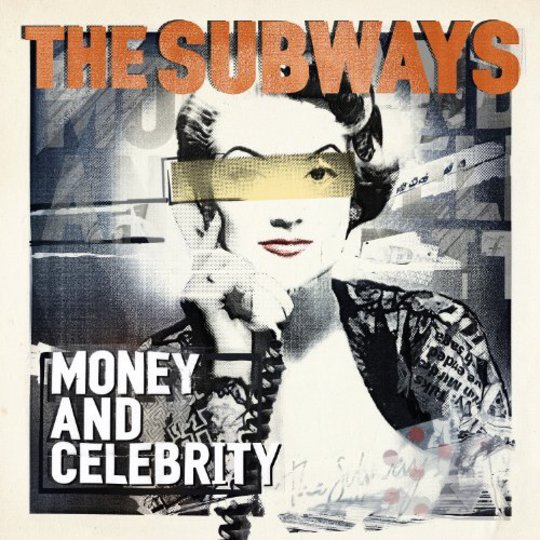 There’s no sound more frustrating than that of a band you once felt all warm and tingly about stalling in second gear. Not only does this scribe have to put up with the relative disappointment of The Subways’ mediocre third album Money And Celebrity, I’m publicly tasked with sticking the knife into what is probably their last big career gambit. What a ballache!

To briefly explain, The Subways are a band that chimed well with my adolescent desires to taste guitar-lead euphoria. Billy, Charlotte and Josh played at least three of the Reading Festivals I attended in my youth, my band The Counterfits could knock out a mean cover of ‘Rock & Roll Queen’ and the trio suffered the great misfortune of being the first ever group I interviewed. Even if you never fell for the carefree energy of this Hertfordshire three-piece, you’ll hopefully appreciate the pickle I’m now in because Money and Celebrity is an undeniably average beast.

Following on the dynamically explosive if commercially unsuccessful All Or Nothing, which eventually saw the band depart from Warner Bros, this third album is an extremely unsure effort, loosely galvanised by a tenuous focus on the fickle trappings of fame. Why The Subways took it upon themselves to rally against such a subject is anyone's guess but ‘Celebrity’ and ‘Popdeath’ struggle to rise above the vacuous culture they so revile. “It’s a party and don’t you know it don’t get much better,” screams frontman Billy with audible contempt on ‘It’s A Party’. Shame he couldn’t find a better way of expressing his scorn than the with the feeble followup line, “We’re going to make it such an awesome party.”

Following on from his drab efforts on Viva Brother’s Famous First Words, producer Stephen Street’s flat take on a formerly pulsating outfit hardly helps matters. A strict songwriting adherence to crunching radio rawk is no real excuse for a record, which for all its bile, never bites in the way ‘Oh Yeah’ or ‘Holiday’ did on Young For Eternity. Those teenage kicks are regrettably hard to beat but thankfully ‘We Don’t Need Money To Have A Good Time’ and ‘Like I Love You’ prove Money And Celebrity to be not without its redeeming features.

In fairness to The Subways, there’s nothing truly horrific about their latest LP. Nearly every track is catchy enough but for an act in the business of cheap, good time thrills, most fall too far from the bountiful tree of old. Maybe this is old(er) age and bitterness speaking. Maybe Money And Celebrity will inspire a new pimpled fanbase now my diehard allegiance has flown the nest. I’m guessing it won’t though and that’s worrying, even from the perspective of an ex-obsessive.

A Winged Victory For The Sullen