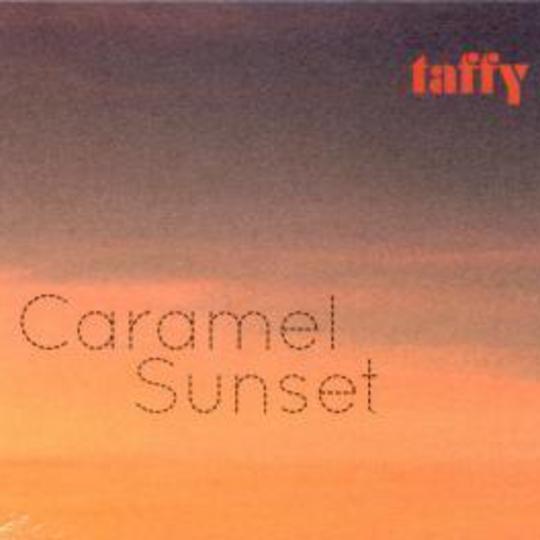 Hailing from the suburbs of Tokyo, Taffy would probably be the least likely act to endorse Britpop were such an accolade based on logistics alone. Having emerged from their homeland's vibrant shoegaze scene almost a decade ago as Saltwater Taffy, singer Iris and bass player Koichin dissolved the band and went looking for like-minded souls with a clear vision and passion for the music they so wanted to create. Enter guitarist Asano and drummer Kensuke and here in all their glory are Taffy v.2012. Not that it's all been plain sailing. Soon-to-be-released compilation Plus+++ kind of fills in the gaps, not that Taffy seem in any mood to look over their collective shoulders, musical reference points excepted.

Busily playing every show offered to them in between writing their first album, it was at the back end of last year that London's Club AC30 became aware and signed Taffy to their label. Now, six months later, the first fruits of their labours are ready for all to hear.

Caramel Sunset, aptly titled due to the Japanese translation of Taffy - sweet or toffee in their native tongue - is a glorious kaleidoscope of pop tinged shoegaze that owes more to the credible side of Britpop than it does Kevin Shields and company. Indeed for a band reared on stars of yore such as The Beatles and Carole King, it's an eventful diversion, particularly as the band openly admit to never having heard the majority of artists their music currently finds itself compared to.

Opener 'Between' sounds as if it could have been recorded any time between 1984 and the present, making its intentions clear from the outset as a cavalcade of crashing drums melt into swooning guitars reminiscent of Billy Duffy. When it comes to the chorus Taffy manage to bring another dimension to the table; the infectious pop hook. And so it continues for the majority of Caramel Sunset.

'Candy Lane' maybe built around a driving bassline and obtuse lyrical asides ("Take a look inside her heart") yet at the same time it could be Echobelly's 'King Of The Kerb' revisited. Which is no bad thing. 'HaaH' too conjures up memories of 4AD's Belly when all teenage boys used to have the hots for Tanya Donnelly, something Taffy's delectable singer Iris no doubt currently finds herself dealing with. "Young girls and cherry pie!" screams '=3' like an overexcited teenager, while 'He Was' and 'Flower Chain' take the same bus route as Elastica almost two decades ago; cool and sassy without outstaying their welcome.

When Taffy proffer the reflective option, as on widescreen midpoint 'Indetermination' it not only uncovers another string to their bow, but also suggests they're a band whose musical palette is continuously developing. 'M23-7-8', meanwhile, ram raids The Byrds quizzical melodies via The Zombies Odessey And Oracle to create a delicious slice of Paisley Pop totally out of kilter with its setting. It's album closer and current single 'So Long', though, that really sets the cat among the pigeons. Buried beneath its saccharine sweet chorus and perfect harmonies lies the story of a boy dying of leukaemia whose wish is to leave a memorable legacy behind after his death.

Highly addictive from start to finish, Taffy can be proud of their achievements here as this is one caramel you won't mind getting stuck between your teeth for days on end.