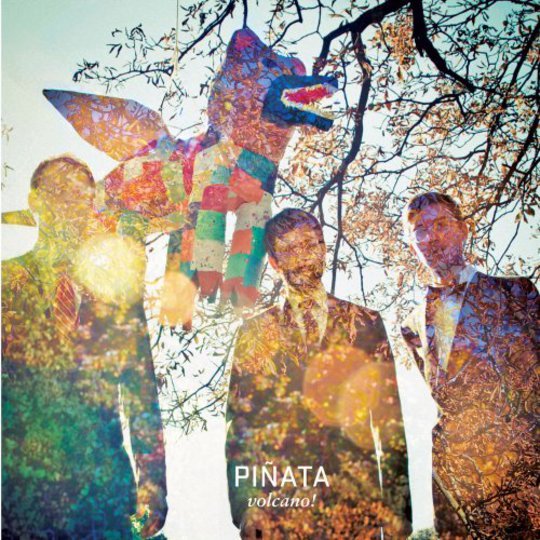 They are slippery eels, these Volcano! chaps. They side-step description, evading all forms of language-based entrapment and show no signs of willingness to be holed up like a pigeon. On their third album, Piñata, Volcano! are making like a precocious child, desperate to prove to mum, dad and their favourite teacher that they have LEARNT MUSIC, REAL GOOD! They can do fast stuff, slow stuff, they can be funny, they can be a bit sad, they can do dead good noodly guitar stuff, they can do brash, unkempt rocky stuff. The. Lot. And, somewhat irritatingly, like all the ‘best’ precocious children out there, they are really fucking good at it.

Precocious children wouldn’t be labelled ‘precocious’ and get sneered at by other, competitive parents, if they weren’t actually talented little bastards. They would just get a withered, pitying look and labelled ‘gobshites.’ Time to sneer at Volcano! then, because they manage to achieve so many varied things in Piñata that they have probably just scored an undergraduate degree in Being Volcano! In amongst the stuttering guitars of the title track, the rolling drums and the (…am I really about to say this…?) vocals that somehow sound like Morrissey singing a Wild Beasts song (There. Done it.), it is clear that no laurels will be rested on for the next 40 minutes. No haunches are sat upon, no dust allowed to gather. Oh and that Morrissey / Wild Beasts thing they had there? That doesn’t last long.

Piñata begins in something of a frenzy, with the title track; the story of the Mexican celebratory tradition, told from the viewpoint of the piñata itself. And you know, if you’re going to personify a piñata, it’s going to turn out sounding like a pretty sad story. No matter how jaunty that beat is behind you, no matter how tropical and lilting your guitar lines. That piñata’s gonna get beat up, right? Thankfully, the band opted against writing an entire concept album about the poor piñata and tackle the weighty subjects of child stars (‘Child Star’) and having too many lemons to juggle (‘So Many Lemons’). The latter, given enough listens, will most likely unveil itself as an elaborate euphemism for something far more serious but for now, it’s a song about having too many lemons to juggle.

The track that spins the album on its head, though, is ‘Fighter.’ At six and a half minutes long, it works hard to keep your attention. And for the first time since the album’s introduction, you may find yourself with a lump in your throat. Because, in amongst the witticism and the lyrical hilarity of the preceding tracks, ‘Fighter’ is a jolt of emotion. With instruments played at half-force, the vocals build up to the initial cry of “I’m a fighter-er-er!” and you realise that all that japery that went before may just have been a precursor to some genuinely, gut-breaking emotion. “I wish I could have more lives / I wish I could turn my hands into knives, knives, knives, knives.” It’s a guttural growl and a near-spoken-word moment away from being the kind of song that an X Factor contestant would sing ‘for survival,’ though musically, the band’s eccentricity thankfully prevents that from ever being a serious option.

In a manner that makes you doubt whether or not those six and a half minutes genuinely ever happened, the band flip back to their frenetic grin-churning and genre clouting. Piñata is an album of steady evolution, unveiling layers of sound and personality on each new pass. Its continual shape-shifting may well defy categorisation but if you’re finding something hard to pin down, you may as well run with it.