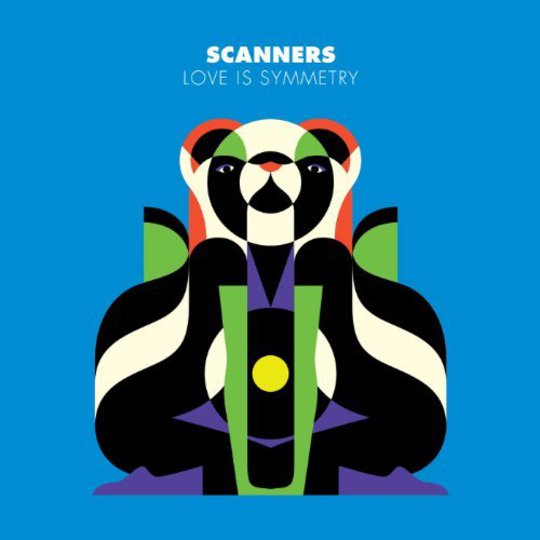 Frantic, clattering twee and brooding, minimal rock? Soaring folk to dance-inducing synths? Camden five-piece Scanners aren’t ones to limit themselves to one genre niche, and on album number three, Love is Symmetry, they have covered most of the mainstream genres – rock, pop, folk and dance are all here, albeit conforming to a consistently indie blueprint. Self-produced and recorded, this is the sound of a band full of ideas and successfully realising all of them.

As you could probably guess from their soundtrack credits (which include Skins, Shameless and One Tree Hill), Scanners specialise in somewhat brooding, kooky indie, and despite the success of their multi-genre experimentation, they can certainly still smash these out with the all the aplomb of Win Butler or Karen O.

‘When They Put Me Back Together They Forgot to Turn Me On’ has the delicate piano and gothic choirs of a Danny Elfman score (think Edward Scissorhands rather than The Simpsons), before a frenetic chorus scrambles in; a Long Blondes-esque monotone clashing wonderfully with frantic yelps over a broken, scatter-fire rhythm. Elsewhere, on the equally mammothly titled ‘Today Is the Tomorrow that They Promised Yesterday’, it’s rather more minimal as cool guitars cut through sci-fi whirls and bleeps, backing dubby bass and a sharp, anti-consumerism rant (“How about a new TV / what not to wear, what not to be ... That’s all, did you think that there was more?”). Similarly, opener ‘Love Is Symmetry’ begins with finger-picking, mirroring the calm precision of the xx further with Daly’s enunciated whispers. But then the chorus blazes in, and sunburst synths herald the song’s core; desert indie, sultry vocals worthy of Debbie Harry, and shimmering waves of echoing cymbals. It’s euphoric and unashamedly big.

Repping Scanners’ electro-pop inclinations is ‘Control’, dominated by insistent, bubbling synths and vibrant, irrepressible energy. In terms of the calmer, folkier turns, single ‘Mexico’ only further showcases Scanners’ vocal versatility, as Daly switches into sunny Americana, in contrast to ‘Love Is Symmetry’s silky menace or the upbeat bounce on the dancey ‘Control’. Like a combination of Karen O’s Where The Wild Things Are work and Surburbs era Arcade Fire, it’s gorgeous, all soaring harmonies and jitter acoustics.

There’s one more genre leap left in Love Is Symmetry though, and finally Scanners throw themselves wholeheartedly into some indie-tinged post-punk. ‘My Streets are Always in the Shade’ sees Siouxsie styled vocals over a gothic, Cure-referencing riff; all sexy, noir rock. Better still are the clattering drums and grinding, buzzing drone synths of ‘I Couldn’t Help Myself’, which again seems to owe a debt of inspiration to Blondie.

Given the sheer range of Scanners’ inspirations and experiments, it’s all the more impressive that they manage to jam everything into a short, sweet 45 minutes. There’s not a missed target. Undoubtedly, it’s their best album so far – more urgent, and more challenging, both for the band and the listener. United by strong melodies, kinetic percussion and Sarah Daly’s stunning, versatile voice, Love Is Symmetry is an astonishingly varied album that manages to avoid any hint of confusion or incoherency despite its ever-changing sounds.

Ed Harcourt on Tom Waits: "The grizzled uncle I...