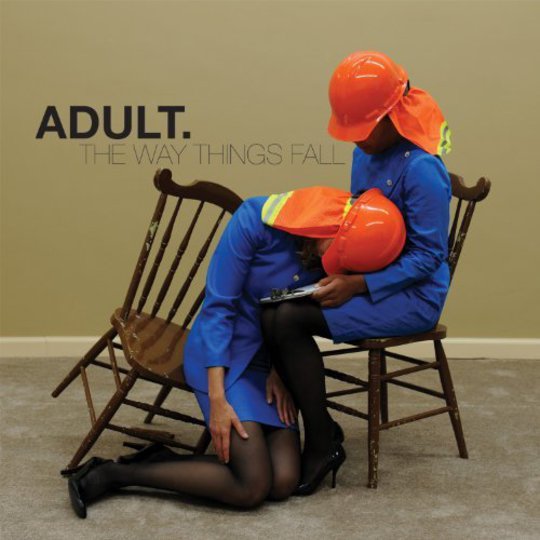 With a grind of synths and a few involuntary twitches, Detroit’s biggest purveyors of techno paranoia and electro unease are back. After a six year hiatus, husband-and-wife duo ADULT. have returned with their fifth LP; and it’s their most conceptual yet.

Less confrontational than most of their earlier releases, The Way Things Fall marks a shift away from the industrial and towards the accessible, harking back to perhaps their most well-known release: 'Hand To Phone’ (famously remixed by Soulwax). Synth-manipulator Adam Lee Muller describes the record as “the closest we have come to writing traditional ‘pop’ songs... even though we know they’re totally mutants”; and he’s summed it up perfectly. Most of the album’s intros are strongly reminiscent of dark Eighties synth-pop, with thin, echoing drumlines and synthesiser-led hooks, but ADULT.’s trademark taste for doom and dread is never far away as Nicola Kuperus’ foreboding, monotone vocals concern themselves, as ever, with only the darkest of themes. There’s no bass guitar to be found on the album, but that merely allows them to avoid the easy scares of make-you-jump horror in favour of pursuing the deeper, claustrophobic fear of an unsettling psychological thriller.

Singles ‘Idle (Second Thoughts)’ and ‘Tonight, We Fall’ are demonstrative of this new style, combining unnerving analogue techno with a pop-edge that calls to mind early Cure records. Thematically grim lyrics underline the anxiety, as Kuperus intones, “Shout if you want to, no-one really cares / Panic if you need to, you’ll still be standing there”. It’s like listening to the Eurythmics, from the bottom of a deep, dark k-hole. These icy proclamations are what ultimately ties the album together, as Kuperus’ reflections on failed relationships and lost loves create a wider, more universal sense of fear, as the omnipresent undercurrent of paranoia hints at all-encompassing disaster.

Elsewhere, The Way Things Fall maintains the nightmarish fever pitch, as the dark pulse of ‘Love Lies’ clashes with high, unnerving synths – and the rich, delirious vocals loop “Love, lies, it’s no surprise, it’s your demise”. Finally, ‘We Will Rest’s metronomic synths lead into alien glitches and a sinister nursery-rhyme melody, and Kuperus’ apocalyptic visions seemingly come to pass, as she deadpans “We will rest like sinking ships”, as the outro’s clanging ship’s bell signals the end of the world, and the album.

Despite its relative smooth polish, The Way Things Fall is consistently creepy; a gothic, glitch-ridden Kraftwerk, accompanied by the vocalisation of those haunting thoughts that come to you as you’re trying to fall asleep. Like horror films or ghost stories, the upside of ADULT.’s brand of dark paranoia is its visceral thrill; it’s as nasty as electro can get whilst maintaining a remnant of a reassuring pop edge.

The Winner Takes It All