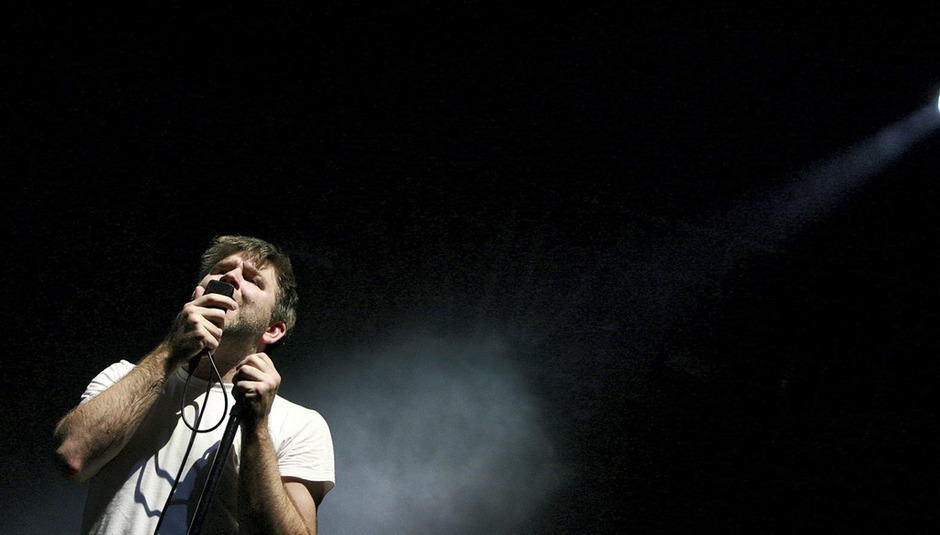 DiS meets James Murphy; asks about Daft Punk; gets the brush off

DiS meets James Murphy; asks about Daft Punk; gets the brush off

James Murphy doesn’t attempt to hide that fact that he’s 37 years old. In fact, he refers to it pretty frequently. Sitting in the bowels of EMI Records (the parent company of his own DFA label), he’s splendidly dishevelled in anonymous brown hoodie, four days’ stubble and awry hair. Turns out he’s also put out his back. Too many on-stage aerobics? “Not enough sleep and too much flying,” he retorts, sheepishly. Welcome to the humble, slightly odd, hangdog world of James Murphy, aka LCD Soundsystem.

“However, frequent flying means I pay the cheap price but get to sit in the big boy seat,” he confides. “I know enough, though, not to take the champagne before the take off and wait ‘til during the flight. The stuff they serve before is shit.”

Possibly you haven’t heard the centrepiece track in LCD’s second LP, Sound of Silver. Shame, as it’s a touching, Talking Heads-esque, wonderful song built around a seven-minute piano riff, ostensibly about the utter oddness of life in a touring band, and mainly about missing those who you love. James is informed that in the DiS office we have crowned ‘All My Friends’ as the best song ever to complain about how hard it is being a rock star (That’s not actually true, you know. Just ask Daniel Ross – Ed). Murphy laughs.

“The song came from the title – I start with titles and then look at the idea of what the titles means. That title came from a discussion with Alexis from Hot Chip about ‘Krap Kraft Dinner’ (seminal live song from the band’s debut LP). ‘All the people that I love are here, all the people that I love are drunk’ - I love that line. And it reminded me of a line that I wanted to take from a song by Dinosaur, ‘Go Bang’: ‘I want to see all my friends at once and go bang, I’d give anything to go back to that place and go bang’.”

“Just being in a room with your friends,” continues Murphy, “is a really simple and wonderful desire. It quickly became apparent to me that the idea of being around my friends – which was a big, huge part of my life with DFA, and being in New York – was really important. We had this obsession with just taking care of New York, throwing parties there. Not being global and internet-driven, which was funny, because… It just became a bit about missing things, not being able to do the things [I wanted to do]: throw more parties in New York and be around the people that I really love.”

“I never intended it to be too complaining,” he adds, a little ruefully.

The problem for James Murphy is how to fit being the leader of a successful band in with the rest of his life. Nearing his 40s, married and happy at home producing records, it’s an existence that leaves him in a state of mild bemusement.

“I don’t dislike touring, although I miss my wife. I don’t think touring is bad, or that being in a band is bad – it’s just an ill-fitting thing for a married 37-year-old guy. It’s also a funny, fitting thing that Sound Of Silver is my second album – if this was my eighth album and I’d being doing it since I was 23, I wouldn’t know what to do, it’d be different. But I know exactly what else to do. I’ve lived a totally quiet life at home until my 30s, and I got married when I was 34. It’s just a funny fit – not a bad one, but a funny one.”

Of course, regardless of Murphy’s misgivings, LCD has now become a live, gigging machine. Recently, the band added Hot Chip member Al Doyle to the ranks as a temporary guitarist for their US tour. “We love him,” Murphy says effusively. “Going on tour with Al was pretty magical – he’s a really incredible musician. He’s more than a guitar player – he took over the whole band leader bit as well.

“We lost [bass player] Tyler Pope, who was on the record we made. He’s also in !!!, and their record was meant to come out last September and then the idea was he’d pick up [after their touring] on my album. They kept dicking around with the record though, until it came out a week before mine, so he couldn’t do the tour.

“We also lost Phil Moffman [guitarist] - he has a son and his dad duties have increased. Losing them was such a blow, and we knew whoever we got had to be really strong rhythmically…”

Indeed. LCD’s reputation now precedes them as a live act. Part of the appeal is the group’s (or probably Murphy’s) steadfast refusal to take the easy musical way out. Live, LCD Soundsystem eschew the over-the-top use of samples, sequencers and other techno tricks you might expect from a pair of studio albums played live.

“The only things that are electronic in the set are basically the techno songs. For us it’s about being a live band. We have really strict rules. Anything that comes out of a sampler has to be an ‘inorganic’ sound. Like, we actually bring a stringed piano on tour – no samples are allowed. A synth line can’t come out of a sampler, either. Our electronic is significantly rawer than most people’s guitar music.”

With that statement, he bursts out laughing, realising how utterly elitist and dismissive he’s just sounded. Nevertheless, Murphy continues: “When I go see live guitar bands, it’s all shiny, with digital amplifiers and everything like that.”

All of which confirms that LCD Soundsystem are well immersed in the music industry. The entrance, as discussed before, was later than normal, so why then? What led to signing the inevitable Faustian pact?

“Well, I did the [LCD Soundsystem] 12”s for fun – and from the reaction I was totally surprised and chuffed. Jesus, my life turned around I went from totally ‘if I die non-obituary animosity’ to being invited to DJ some place, and this was a huge leap in what I had access to experiencing before… to fly some place and be put in a hotel, to get the flight paid for, and I was content with that. Initially, the only plan was to get the Rapture record out (which Murphy and DFA partner Tim Goldsworthy had produced).”

Murphy then began to talk to record labels about putting the record out properly, worldwide. Not without misgivings, though. Going from being a set up where “we had no staff and had never released anything other then a piece of vinyl” to joining up with a large entity was enough to induce immediate suspicion:

“I come from this punk rock background where every major label was the same and you kind of have these Machiavellian ideas about these things. But you get in to the way labels work and you realise that it’s not actually organised enough for it to be Machiavellian. There’s something Keystone Cops-ish about it. But we met what seemed like decent people who had a decent grasp on music. I was really trying to figure out a way to not hold The Rapture back, and I wanted them to go with EMI and we were going to take the DFA label with them, but they had met someone else, and I didn’t like that label (Island Records), so we went our separate ways.”

Murphy’s voice lowers: “I thought this was the right place for them,” he sighs, “but I couldn’t push them because, what if it screwed them up? What if I fucked my friends up? I’d already fucked them up enough about being so slow in putting their record out.”

Without The Rapture, Murphy decided to plough on with his new relationship. “It seemed the thing to do was make a record - if it gets fucked up, who cares? If I make the record I’m proud of, I don’t care about the rest of it, so I made the [first LCD Soundsystem] record and went out on tour.

“I think I’m lucky – I understand what I’ve gotten myself into and I’m not stressed about it, though I am a stressful guy. I’m given a lot of freedom, and I don’t know that I have to worry a lot about what the rules are… because I’m not all that obsessed with what the results are.”

“There’s a limitless amount of stuff in my head. I listen to a lot of music. I have listened to a shocking amount of music. I’m 37 and I’ve been a music obsessive since I was seven, so that’s 30 years of listening to records and staring at record covers, so songs like ‘New York, I Love You…’ are not weird to me. From the perspective of being ‘the LCD guy’, I guess it was a little bit. Doing this record, I didn’t want to be a self-parody. I didn’t want to just get involved in ‘I’m the guy who yells stuff’. It would have been hard to make a whole album like that and not feel I was parodying myself.”

So, no more list songs like ‘Losing My Edge’? “That was a good one, though, and I haven’t been able to better it, so I feel it’s a bad idea.”

Murphy is admittedly out of touch with the latest musical fads – he only saw The Gossip the weekend before we meet, and has no idea who Scroobius Pip is, but nor is he particularly bothered. He’s more interested in animatedly complaining about his new New York home: “I lived in Manhattan from ‘89 until a couple of years ago and then couldn’t afford it anymore, got married, got a dog and moved to Williamsburg.”

He continues: “Brooklyn (the New York borough where Williamsburg is found) as a whole is just a college town. Like, it’s all the same kid, and I’m not mad at that kid in particular, I’m not against that person – that person is me. But it’s all the same, and Manhattan’s all mixed up. I like that better, so I don’t know what I’m gonna do… do the big shows so I can afford a place there…”

Speaking of big shows, LCD are playing the Wireless Festival with Daft Punk… Murphy twitches: “That’s why we did it.”

Right, regarding Daft Punk, has anyone ever asked you if…

Um, I’ll leave it there.