Future of the Left

Love Songs for Our Husbands 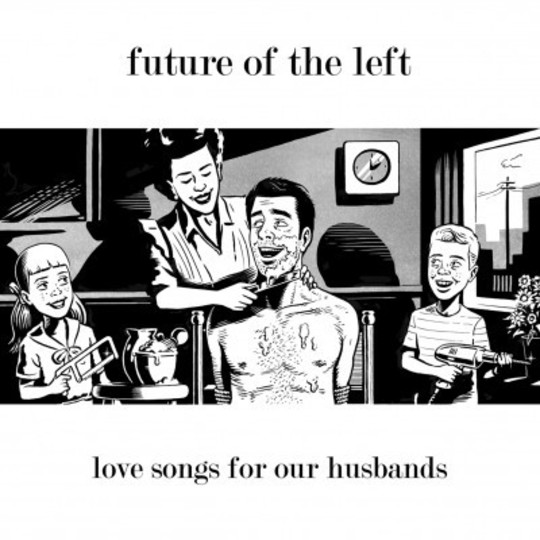 When Future of the Left announced that if there were to make a fourth album they'd need our help, it was heartening to see the reactions; they hit their fundraising target that day, doubled it that week, seemed humbled at both these events and proceeded to shave a cat in celebration.

Album four will land later this year but to keep the fans going, this EP hints at what those pledges will bring in reward.

'The Bisexuality of Distance' is the EP's star performer; it manages to impress from the opening note in the same way that 'Arming Eritrea' and 'The Lord Hates a Coward' did before it, possibly because the bass playing is so bad-and-indeed-ass; loud, angry, breathless, exciting and without an ounce of fat on it. Like those tracks it manages that rare feat of seeming like something familiar that only this band could create yet entirely unexpected. Expect it to feature in all upcoming setlists.

The band also have a track history at lobbing in a tune here and there that initially seems very un-FOTL but usually turns into a much loved experiment down the line (see: 'The Contrarian', 'Throwing Bricks at Trains', 'The Hope that House Built', 'New Adventures', 'HometapingiskillingSusan', etc). Eyebrows will likely be arched at 'The Male Gaze' initially too; I tend to nearly always prefer their more deafening, shouty material but a few spins quickly saw the mid-paced chorus harmony worming into my consciousness. Days on it continues to reward, largely due to the lyrics; I think it might be about Falco's fear of letting down fiancée and fellow band member Julia when they get married any day now - meaning it's probably not at all.

'An Idiot's Guide to Ireland' sits somewhere in the middle and is very good indeed. The 'jauntiness' counterbalances some of Falkous' vicious lyrics perfectly: "My memory she was first to the plank... She thought of the children she'd bred to ignore / The friends she could suffer and then she could bore / She leapt from the edge and they clamped her until she had drowned".

'Perpetual Motives' is even shorter and to the point. The frantic, overlapping build up to a chorus that never arrives is quite splendid.

As a taster for the main event later this year and further proof that version 2.0 of the band is now a fully fledged entity of its own, this EP delivers on both counts.