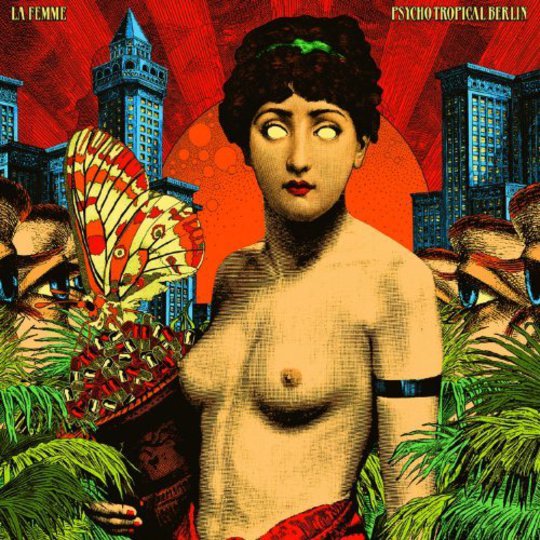 La Femme: a French band plying us with jangling West Coast surf pop, undercut with doom-laden kraut coldwave. It’s as unusual as it sounds – Google 'surfpop coldwave' and they’re on their own. Add to that mix a serious dose of wackiness and a general Halloween vibe, and the whole thing should be a disaster.

Their debut album Psycho Tropical Berlin sounds like the Beach Boys jamming with the Velvet Underground and Françoise Hardy, covering ‘Monster Mash’ – and though that sentence has to be up there with “Santa, the Armadillo and I” in terms of implausibility, it’s a style that is astonishingly catchy, natural, and flat-out fun. It’s time to surf the coldwave.

Throughout the album, most tracks have the same broad blueprint. A thudding, ominous intro laden with thwacking bass that blooms into sharp, punchy surf guitars. A spooky ambiance lent by droning organs or synths, and yéyé, aggressively rhymed vocals from one of the group’s many femmes. There’s a constant aura of kooky upbeatness – most of Psycho Tropical Berlin could be featured in a zany advert for French cars, wasted in that context but still prompting you to reach for Shazam.

A standout is former single ‘Sur La Planche’, a pleasingly repetitive romp through the pleasures of surfing, updated here to be faster, tighter and more synth-dominated. Frantic, glorious and lighthearted, it’s all you can ask surf-pop to be. Elsewhere, opener ‘Antitaxi’ pushes the Sixties Californian influence further, flexing razorsharp guitars and a Theremin whilst slightly menacingly extoling the benefits of taking the bus (“Antitaxi! Prends le bus!”).

Good as these tracks are, 16 of them would perhaps be too much. This is where La Femme’s odd genre combination comes into its own, as their surf side can be played down, and their other interests pushed to the fore. The excellent ‘Le Blues de Francoise’ is a case in point, demonstrating a more sombre style with not a jangle in sight. Over a haunting organ and subdued strums, a perfect monotone spoken delivery details Françoise’s blues as she sits alone with her tissues and cigarette ends, “pas un email, pas un coup de fil”. The chorus chimes in, and another Femme jollies things along, insisting “Tu n’es pas belle quand tu pleures”.

Another gentle success comes in ‘It’s Time To Wake Up’, a slow ballad which captures wheezing synths and soothing organs, calling to mind their compatriots M83. Initially a simple lovesong, it quickly unravels into brilliant post-apocalyptica, as we learn they are together forever, the survivors – “Tout le monde se fait tuer / La silly cause / La guerre était finie – Mata Hari!”.

Though La Femme’s music is often irreverent and their female singers anonymously ever-changing, the women of Psycho Tropical Berlin are packing ideas behind their sultry vocals. Whether or not you can be bothered to translate the lyrics, their manic, rollercoaster pop and fierce hooks should be enough of a draw for the most Anglophone listener.