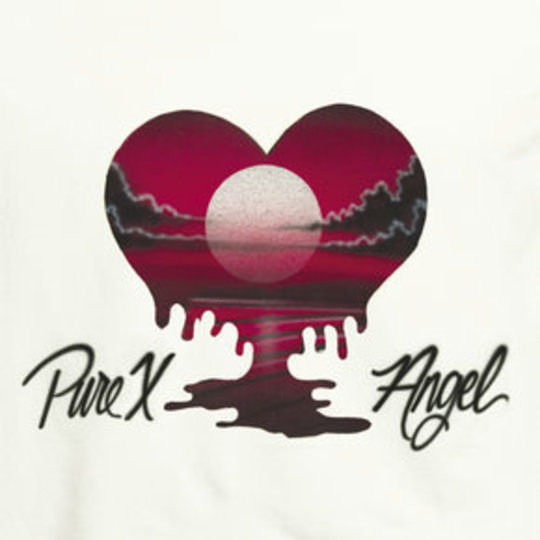 No doubt by the time you read this you have already figured out, either through firsthand experience or timelier reviews, that the Pure X that put out this high pitched sugar fest can scarcely be compared to the Pure X that put out the fuzzy dream invader Pleasure. You've already read/heard the comparisons to T-Rex, or Fleetwood Mac or something else suitably Seveties-ish (then again, maybe that falsetto reminds you of Prince). You are also au courant with Pure X's decision to shun ye olde recording studio in favour of ye evyn older 'rustic'. hometown dance hall. Authenticity++.

Angel tells a story but it's nothing you haven't heard before: boy meets girl when they're too young to ever be sans chaperone ("little schoolkid, money from your momma's purse"). They spend a few years sending each other eloquently coy text messages ("starlight/in your eyes/show me the way to your love") As irrational teenagers the two find themselves in a relationship built on the demands of their sexed up endocrine systems ("Fly away with me woman/I don't even know, where it is I want to go/ I don't even care, we're already there"). Their illicit escapades are the stuff of classic romance ("heaven is a feeling/one that I can believe in/you can have it any time you want/heaven's a feeling").

Of course, wherever there is Classic Romance, there is also Great Tragedy. What makes her fall out of love with him we'll never know but he is convinced "I can make you want me/but I'm running out of time" failing which "what if I lose my mind?". 'Failing which' is precisely what comes to pass as our man walks into that tried and true metaphor for all things Greatly Tragic - 'Rain' ("I walk into the rain/washes away everything/no, no more trying").

Despite the predictability of story, sound and words, Angel cannot be seen as anything but a beautiful record. The glittering 'Every Tomorrow' may moralise early on in the album ("Every moment hangs on a string/none are the same") but you'll be hard-pressed to deny the aid the tearful strings lend to its credibility. 'Rain', proud taker of the cliché cake, makes even its own unfortunate lyrics appear justified in their unoriginality. And 'White Roses' may just consist of just two lines of verse, but you could listen to their heartbroken exhalation indefinitely.