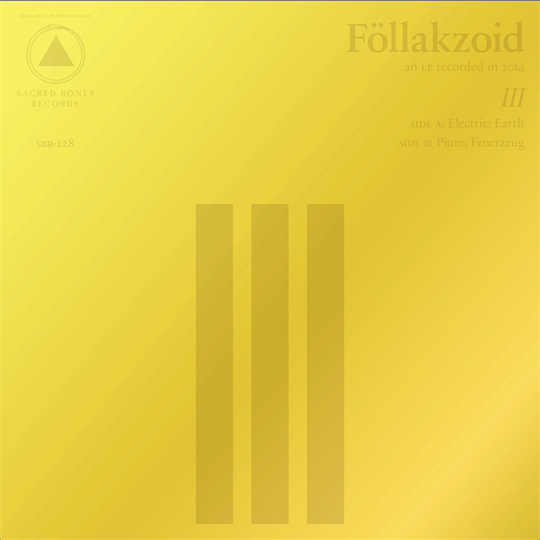 Seven minutes and forty-two seconds into ‘Electric’, the opening track on Föllakzoid’s triumphant return III, there begins a 48-second foray into the land of fuzzed-out feedback which is so right, so perfect, arrives just so absolutely at the right juncture in the song that it feels like the band have been playing not just with your ears and heart, but with your very soul. Before and after this we are treated to a masterclass in the appropriation of the restrained dance and dub groove in the rock music form. The interplay between insistent drums, an elastic, yet ever-pulsing bass, and the clever use of synths and guitars, which are never over-bearing, draw the listener in to a state to which the only logical answer is to submit. The repetition of the incrementally-building groove, the occasional flash of rhythmic light, they draw you in so that, at 7.42, without knowing it, you are more prepared than you ever thought possible for the release of those 48 seconds of bliss. From here on, there remain another three minutes and 22 seconds of slight return to the initial figure, but we, those of us who have ridden the 7.42 wave, we’ll never be the same.

And this, this is what Föllakzoid can do to you. On first listening to III’s four tracks (is there any irony here or am I reading too much in to it?) there is a sense that the album could pass you by. Atmospheres are built, grooves landed upon and spun out to their logical extreme, but, to be frank, not much happens. The developments are subtle. They don’t catch you by surprise, but give yourself over to the album, and it will envelop you in its true power, which is this: when a vibe, a groove, is rock-solid, why change it?

‘Earth’ builds the theme, as a more aggressive guitar tone leads the way. On this track, though, it is the glorious funk of the bass which stands out as it swoops in and out in all its syncopated glory. This track is only 11 minutes and 20 seconds long. Presumably the boys were slacking on the day this was recorded. The introduction of the guitar figure at 1.35, the kind of melody which has adorned many a song by Doves or Elbow to my ears, is a highlight of the album. As it recurs a minute later and then throughout the track, the mastery of Föllakzoid becomes clear. They can make a chorus out of a single guitar line. They can leave you craving it, seemingly forever, and then deliver just when hope has been lost. The song’s payoff, as it comes towards the eight minute mark once again is a squalling cacophony which subsides almost before it’s begun, as we return to that glorious chorus figure, before the whole thing comes apart at 9.41. The Earth, it seems at this stage, is a dark void, without form.

‘Plure’ is a return to form for the timekeepers, weighing in at 12.46. There’s an off-kilter feel to this one, much more akin to the jazzier offerings of a band like Portico. Again, the bass is wondrous, providing a foundation for yet more understated guitar pyrotechnics (and the odd bell).

Closer ‘Feuerzeug’ takes the tempo back up. Guitars and synths this time compete to be the centre of attention. All the time, that head of yours, those tapping fingers, which have been going since the album began, what seems equally an age and five minutes ago, are still nodding and beating away. It’s the band’s stated aim with this record to show what can be done with a minimalist techo approach to their craft, and as the lead guitar swirls in and out during this track’s sixth minute it is impossible to say anything other than that Föllakzoid have scored a resounding success. This album isn’t for you if you like your music handed to you on a plate. It’s not for you if you want constant twists and turns. It is for you if you’re seeking a suite of songs to immerse, and ultimately to lose yourself in. And when it ends, you’ll find yourself quite happy as it rolls round to the beginning and draws you in all over again.

Jerk at the End of the Line