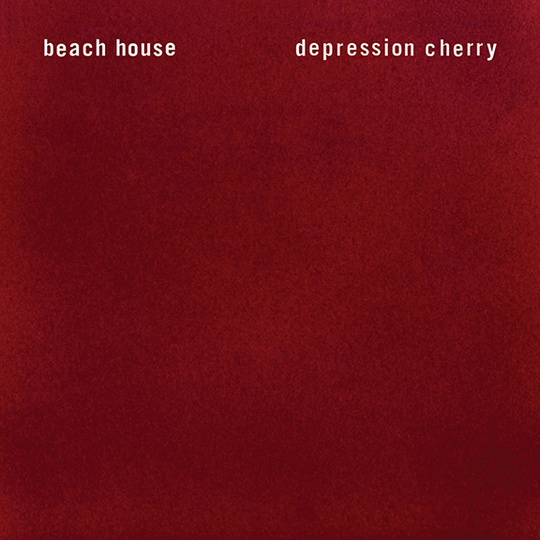 It’s no surprise that on Depression Cherry, Alex Scally and Victoria Legrand – aka Beach House – have concerned themselves with the inexorable passage of time, and life itself. As a duo, their ten years have yielded five albums of growing magnificence, music so lush and graceful you want to sink into it and let your muscles float away from your bones. They’ve changed, while not really changing at all; a steady arc of critical acclaim, growing fan worship, and a steely resistance to over-commercialisation while hewing close to their self-declared ideas of authenticity.

"The flow of time is something I cannot stop. I haven’t a choice. I go".

The above line comes not from a lyric, but from Kitchen, the debut novel by Japanese writer Banana Yoshimoto. A statement released alongside the album lists various quotes that the band says 'relate to the feeling and themes of this record'; also included are snippets of Van Morrison and Arthur Schopenhauer, and the defiant claim that 'We continue to let ourselves evolve while fully ignoring the commercial context in which we exist'. That process of evolution, and the subtle differences on Depression Cherry, are what make it such a fascinating, mesmerising listen.

Gone are the booming drums of Bloom, and that album’s widescreen grandeur. They’re replaced by a return to their older, beloved drum machines and a more studied set of tunes; quieter, with a sense of calm introspection, Scally and Legrand have distilled the very essence of their band down to these nine songs. Whether that’s a reaction to the scale of the stages they found themselves playing or worries about their art crashing head first into commerce is a moot point; this scale just suits them better. The pacing is as languid as ever, and their vintage synths still shimmer like the late afternoon glow glinting off an idyllic lake, but it sounds less like a set of pristine layers than a rich, organic blend; using only a few shades allows them to blur the edges, letting each element – and each idea – gently bleed into the next.

From the organ bloom that opens ‘Space Song’ to the gentle descending riffs that underpin ‘PPP’, there’s a clear-headed refinement at work, and Scally and Legrand instinctively know which of their motifs will work at any given point. The melodies swoop and dance, while Scally’s guitar alternates between bursts of sunbeams and weaving a golden thread around Legrand’s hushed vocals. Only once does he break this pattern; ‘Sparks’ is dotted with a rough, distorted slide riff. But it still complements the drone that buzzes round the edges and the soaring, repeated synth line. The only other deviation comes on ’10.37’, a stark, mildly foreboding track that at times is reduced to just drums and vocals. It’s the least 'Beach House' song here, and yet their skill is such that it fits perfectly with everything around it, sounding like it couldn’t have been made by anyone else.

They’ve talked in interviews about how repetition has informed their process, and that 'we’ll repeat a part for three hours while we wait for the next part to fall into place'. Depression Cherry certainly reflects that, looped segments having a calming, hypnotic effect, almost like a sonic comfort blanket. The cumulative effect is to lure the listener into a sense of bliss; as songs stretch out, time seems to stand still. It’s what gives Beach House’s music its emotional power; it’s an invitation to shut out the world and look within, however briefly, to spend some time with the thoughts in your head.

This is music that lingers in the mind and seeps into the bones. And while you can view it as melancholic, Scally and Legrand never dwell on sentimentality or allow anything to sink into despondency. "What’s left you make something of it", Scally sings on ‘Wildflower’, which could well serve as the band’s mission statement. The novel that they quote from, Kitchen, concerns love and loss as seen through the eyes of Japan’s disaffected youth. Describing the peers to whom she cannot relate, the central character ponders: 'They had been taught…not to exceed the boundaries of their happiness regardless of what they were doing. And what I mean by "their happiness" is living a life untouched as much as possible by the knowledge that we are really, all of us, alone'. With Beach House for company, that suddenly doesn’t seem as daunting a revelation.