How Can We Fix This? 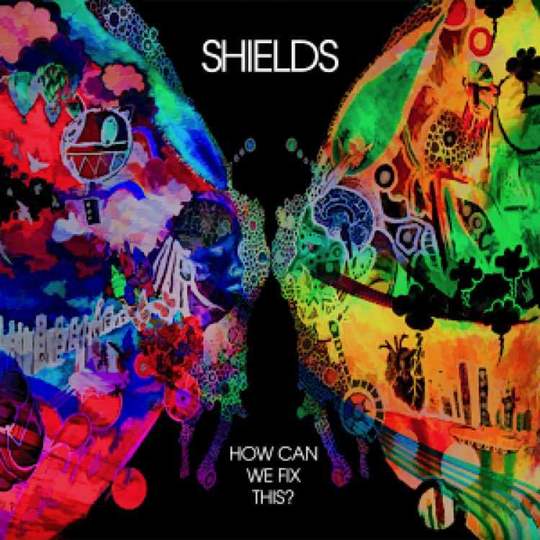 Notwithstanding enduring axioms regarding books and covers, maybe it’s not always so wrongheaded to make a snap judgement on something. How about we test this theory on Newcastle five-piece Shields’ debut album How Can We Fix This? Have a look at the cover art, and then listen to the first ten seconds of opening track ‘Technicolour’. Still with me? Okay, let me go out on a limb and speculate that you’re probably expecting to spend the next half hour or so in the exuberant company of a lurid, excitable pop record, right? Right.

Is it necessarily a bad thing that it’s the work of seconds to suss out where this album’s going to take you? Well, not necessarily. I guess it boils down to what you’re expecting your lurid, excitable pop records to do to you. Me, I’m secretly hoping to be left a giddy, panting mess by a good bit of pop music. The problem here is that I keep having to battle the urge to use the kind of language you’d expect to see on estate agents’ blurbs for houses for sale. Phrases like ‘immaculately packaged’ and ‘beautifully presented’ just keep leaping out at me on contact with How Can We Fix This? That’s not to suggest that there’s no substance underlying its style, by the way. It’s just that there’s so much style that it has the unfortunate side-effect of crowding out its substance. What you end up taking from it is a polite appreciation of its craft, rather than being left sweaty and weak at the knees as initial impressions may lead you to wish for.

Who knows, maybe it’s my perceptions that are the issue here, rather than Shields. It’s important to stress that there’s a lot to love about the record. First and foremost, these are ten excellent songs. The sprightly chops of ‘Mezzanine’ and the breakneck pace of ‘Again and Again’ in particular are two great examples of a band capturing exactly what they’re good at, because Shields are clearly gifted at creating exemplary pieces of artful pop. There’s even the occasional glimmer of a wicked sense of playfulness too - ‘Say What You Need’ is a delicious tease, spending much of its time tantalisingly threatening to erupt into Billie Jean, before leading you off in a completely different direction with a knowing grin on its face.

There’s plenty of ideas crammed into How Can We Fix This? too. There’s a lot of depth and variation in its textures, making for plenty of reasons to keep coming back to the record, but it’s hard to escape the nagging fear that some intangible fire is missing. It’s difficult to put a finger on what’s lacking, given its occasional bursts of energy and Shields’ clear strength as songwriters. I guess the core of the problem is that it feels so damn perfectly constructed that it occasionally can come over a bit clinical and loses a bit of spontaneity. It’s the musical equivalent of being scared to spill something at your mate’s parents’ lovely house, or a present which is so beautifully wrapped you can’t bring yourself to tear into it. Shields are clearly a very good band, but I can’t help but wonder just what kind of effect a bit of grit amid the glitz might have.