and the Anonymous Nobody... 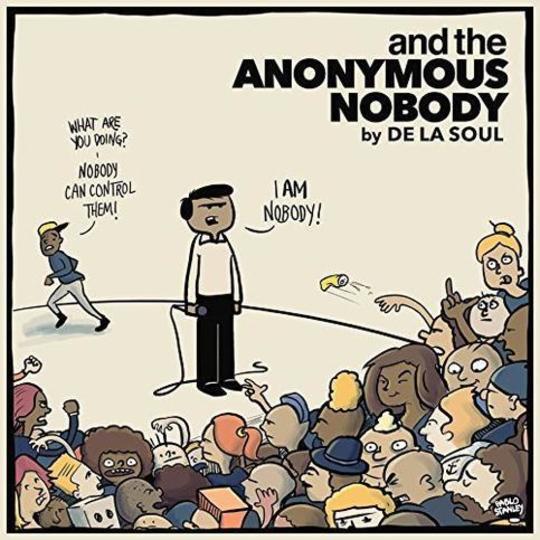 Remaining faithful to both to their underground origins and their fans, De La Soul's and the Anonymous Nobody… came about via funding by a Kickstarter campaign that hit its goal in remarkable timing (under ten hours) - perhaps more a reassuring than phenomenal feat when one considers the group’s prestige.

Longevity, buttressed by quality and consistency, are substantial requisites to legendary status in the hip hop realm. But the concept takes on a new meaning when one considers De La Soul, who have been making their own unique waves since the late Eighties, and more astonishingly, seemingly churn out a new creative transformation with each release, whether it is exploring their group’s metaphorical death in De La Soul is Dead, or the eclectic space odysseys of the Art Official Intelligence LPs. While their dedication has long been established, and the Anonymous Nobody… marks their first official studio album since 2004’s critically acclaimed The Grind Date.

Like most of their previous work, and the Anonymous Nobody… is a melting pot of varied styles, with a focus on gripping lyrics and sample-heavy instrumentation while simultaneously blending more contemporary leanings. What results is a sublime cavalcade of both penetrating soundscapes and vocal underpinnings. Following an intro by Jill Scott, 'Royal Capes' mixes triumphant talk and production with a jazzy feel. Unlike your the run of the mill artists populating most run of the mill radio stations, each line by Dave and Posdnuos is laced with lofty, intellectual declarations, remaining firmly implanted in the not-your-everyday-rap category. A bouncy bassline groove equipped with Seventies funk sampling stabs ensue as Snoop Dogg joins the group on 'Pain'. Even though Snoop is the unofficial maestro of collaborations, De La have perennially perfected the art colliding with other talents, with possibly no better example being Gorillaz’s 'Feel Good Inc.'

Featuring both the lush, dreamy harmonizing of Estelle and the production of the timeless Pete Rock, 'Memory Of…' is De La at their finest, supplementing an intoxicating medley with rich lyricism, virtually checking off all the points of what makes a hip hop mainstay. 'Greyhounds' is another medalist, as Plug One and Two juggle creative wordplay to seduce their respective love interests with the aid of Usher’s admirable hook duty crooning. David Byrne’s appearance on 'Snoopies' proves to be even more exciting than the liner notes hint at, both camps commingling their respective offbeat druthers for one of the album’s most animated, exhilarating moments. Over a hodgepodge of quirky synths, the equally quirky ensemble paint a vivid picture of a future world plagued by dystopian curses.

For all their talk about remaining faithful to hallmarks of authentic emceeing, where a premium is placed on progressive lyricism, De La are not adverse to working with artists less known for their dynamic wordplay than their less meticulous chart appeal, like 2 Chainz’ somewhat left field guest spot on 'Whoodeeni. Fortunately, 2 Chainz rises to the occasion by turning in one of his most lyrically spirited performances, and the amalgam of old and new school stylings proves a catchy, energetic success, fairly reminiscent in tone to The Grind Date’s 'Rock.Co.Kane. Flow.'

Billed as an exclusive Kickstarter track, 'Unfold' is something along the lines of a spaghetti western soundtrack outtake set to kick drums. De La showcase their storytelling abilities, recalling past gems like 'Bitties in the BK Lounge' and 'Millie Pulled A Gun On Santa.' Rounding out the album comes 'Here In After', where the band takes a nostalgic look back at their lives and their career, a staple in the De La tradition, following similar cuts like 'Sunshine' and 'Much More'. Skits and the odd miss accepted, and the Anonymous Nobody… is a grand achievement. Regardless of whether their next project requires outsourced funding or not, De La Soul fans worldwide will just be happy if the group can keep up these standards while never forgoing their wayfaring creativity.