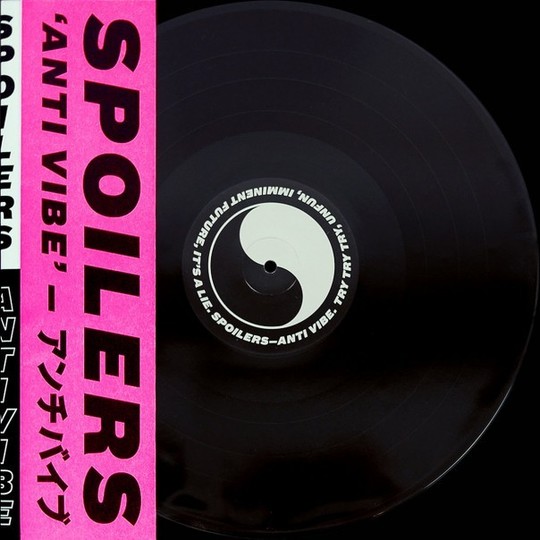 Sometimes an album’s purpose isn’t to be a musical journey, but a statement. Short and succinct, deliciously unsatisfying in its brevity, and really just a musical cliff hanger for the band’s next output. That’s what London four-piece Spoilers' debut album Anti Vibe is. At seven songs and 24 minutes long, it doesn’t even try to convince you it's anything else. It’s the musical equivalent of an ending of ‘Neighbours’ – which is always the best bit. Or maybe it’s the musical equivalent of a ciggy.

Part of this may be down to the involvement of former Ice, Sea, Dead People front-screamo and current guitar-pedal tap-dancer for DANCEHALL, Craig Sharp. Spoilers is his chance to play music that’s gleefully brutish. There’s a balls-out, primary colour formula to his (and their) writing: get a guitar riff that follows/determines the chord progression being played, tack the vocals to it the same way (i.e. riff descends, so do the chords and vocal line) and then let the chorus be a blitz of noise and drum thrashing.

If this sounds almost vulgar in its simplicity, it’s not. It’s probably really complicated to play and undoubtedly a pain in the ass to perform and sing at the same time. Does this make Craig Sharp the DIY George Benson? It opens with ‘Try Try Try’ and it’s the gusto that catches you; a barrage of down-strokes come flying out the speakers, three chords are smashed about in the verse, then smashed about more - but louder - in the chorus. Throw in a bit of a palm muted second verse and a bit that’s kind of a middle eight where individual notes are played as opposed to chords… and that’s dynamics that is. There’s such a joyful abandon in the way this is played that it’s hard not to be swayed, and the band follow the Lou Reed rules on jazz (three chords is jazz) by keeping everything as simple as possible. If there’s a criticism to be raised at ‘Try Try Try’, it maybe goes on a bit too long, ironically.

‘Unfun’ doesn’t make that mistake and just rattles through a guitar hook that Big Black would have jerked about to and the track introduces us to the band’s penchant for early Ash, which is a joy to hear. The middle eight twirls guitar notes while Sharp talk-sings in the way Tim Wheeler does so endearingly. ‘Unfun’ is like ‘Girl from Mars’, if it had been on Sonic Youth’s ‘Evol’.

What’s also worth highlighting is that despite Anti Vibe being a bite-size release that revels within the power of simplicity, it manages to throw diversity of style about with a surprising confidence as well. ‘Imminent Future’ recalls ‘Madonna’ era Trail of the Dead, albeit a quieter version, like the tantalising moment in ‘Totally Natural’ where there’s the talking while musically the door to hell is slowly being opened.

Anti Vibe comes in, makes a fuck of a lot of noise, doesn’t apologise, then leaves. Embrace it.