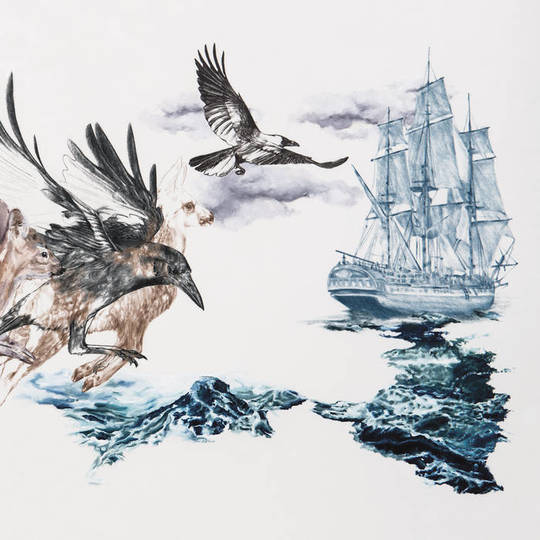 It’s been eight long years since Do Make Say Think’s last record. Whilst 2009’s Other Truths hinted at a bit more crash bang wallop in addition to the blissful noodling brain balm of tracks like, well, 'Classic Noodlanding', it still adhered to the relaxed character of their back catalogue. Not so much here. Stubborn Persistent Illusions finds the band positively excitable. And it bucks the trend of bands reforming after a lengthy hiatus to find the world changed and not really in need of retreads and rehashes.

Opener ‘War On Torpor’ sounds like the gang have been on charge for eight years and are chomping at the bit to burn up stores of energy. It rolls in on a rising cymbal, followed swiftly by James Payment’s drumming, which has never been so frenzied and animated. All the other players match him at a similarly frantic pace that makes for smile-inducing ‘we’re back!’ moment.

Unlike many of their more contemplative works, this record’s strength lies in its more bombastic moments. Their tendency to blend loud and quiet moments with rises and falls is wielded even more effectively than in the past. Subtlety plays no part in the bash, bash, bash of drums on ‘Bound,’ and yet it remains a great deal more satisfying than it has any right to be. Similarly, ‘And Boundless’ is lent a sense of emergency by sounding like an evacuation alarm. There’s never been so much drama on a DMST album, and this latest evolution is a thrill.

The ten-minute-plus ‘Horripilation’ neatly summarises the album’s potency and should go down as one of their finest. Within its running time, there is a wealth of detail and narrative flow to enjoy. It contains moments of shimmering quiet amongst the compelling perpetual motion mustered through swaths of electronics, the glimmer of guitar and nuanced percussion. And with it, they’ve created their most immersive and convincing piece yet.

Much like that track embraces instances of beauty and peace there are further songs that allow for space amidst fevered elation. ‘A Murder Of Thoughts’ evokes a more meditative pace via steel guitar and languid, gentle percussion, and ‘As Far As The Eye Can See’ has a zephyr-like breeziness courtesy of its dancing guitar lines. They chose to end the record with the hopefully titled and resolutely upbeat ‘Return And Return Again,’ and its unadulterated joy. It feels like the musical equivalent of grinning, and that of a band really relishing their pursuit.

It really is a rarity to find artists this far into their career, and after such a sustained break, sound so fresh and positive. Clearly, rather than lying dormant these individuals kept spinning along with the rest of the world, and their return is a great deal richer for it. As a genre post-rock is certainly stubborn and persistent in the face of rocky times for guitar music, but its value is no illusion if Do Make Say Think’s latest is anything to go by.