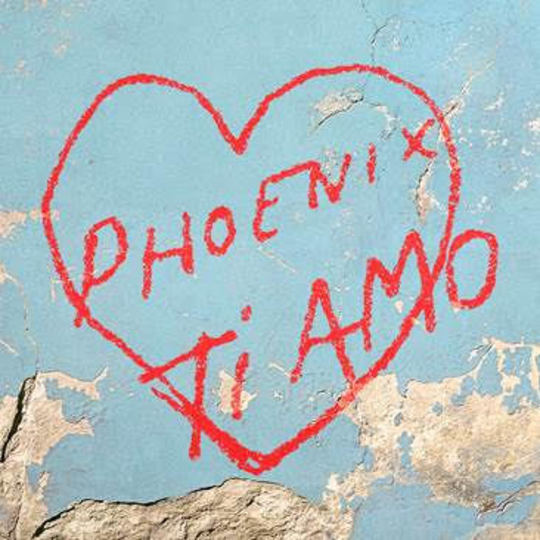 Sofia Coppola has just become the second woman to win Best Director at Cannes for The Beguiled. Finally, it seems, she has created a film that nears the quality of Lost in Translation. The intermediate films weren’t terrible, but perhaps suffered critically as a result of her 2003 whimsical masterpiece setting the bar so high. Her husband Thomas Mars must sympathise with such frustration. Wolfgang Amadeus Phoenix was an album of such refreshing bombast and effortless cool that any future work would surely pale in comparison and struggle to plough its own furrow of success and significance. Regrettably, the struggle continues.

In their first attempt at moving on from their 2009 success, Bankrupt!, Phoenix ditched the jangly guitars for pop-hook synths. This time round, the synths have stayed, but now they’ve put the pedal even more firmly to the floor in their creation of Eurodisco floor-shakers. The fault lies in the fact that, having realised that you can do anything with a synthesiser, they have attempted to do everything. As individual songs, they all have merits, and are genuinely entertaining, but as an album it’s exhausting. You’re left in an E-number coma by the gratuitously saccharine rush of every song. Even the song-titles (‘Tuttifrutti’ ‘Fior Di Latte’) are enough to give a sugar rush. The opening 50-seconds of ‘Role Model’ promises a welcome respite, with gentle chords and becalmed vocals, but then they move into the album’s heaviest drop. This all makes it even more of a shame that they have omitted an instrumental interlude, which provided such an intriguing centrefold to their previous two albums with ‘Love Like a Sunset’ Pts 1&2 and ‘Bankrupt!’; here it would have provided some much-needed variety.

The album’s agenda is admirable. Written in Paris while it was undergoing alt-right surges and terrorist attacks (guitarist Christian Mazzalai was trapped in the studio on the night of the Bataclan shootings), the unashamed positivity and romanticism of these sun-hazed European narratives is refreshing. Paranoia about such perils still remains, but Mars refuses to cow to it. This spirit is best demonstrated in the French language outro to ‘Ti Amo’ which translates to 'I want to believe that the best is yet to come, I know that the worst is as well, so let me count sheep, sing our songs, and dream together'.

The first two singles released of the album, ‘J-Boy’ and ‘Ti Amo’, are enjoyable enough, setting the scene with shimmery ripples as you’re engulfed by the clubby rhythm, disco-balls swirling through every riff. But they also reveal the main flaws in the album: both build promisingly into grand reveals only to stall and go nowhere, like revving a car in neutral. It’s all very impressive at first, but the excitement quickly tires. They’ve also lost their natural sheen of breezy cool, such that attempts at seduction end up being more creepy than charming, whether in the odd auto-tuned gargling of ‘J-Boy’ or the questionable lyrics of ‘Ti Amo’ (“Open your legs // Don’t tell me no”). They kick into gear with ‘Fior Di Latte’, where the meandering gloss of the verse breaks into a clubby reverb of the chorus. This format is repeated on several tracks, but they execute it best here. ‘Lovelife’, despite its intro bearing a striking resemblance to Taylor Swift’s ‘Blank Space’, is the most poignantly intimate moment on the album, with satisfyingly spiralling synths. After these external sunset scenes, the band bring us inside, giving us similarly rose-tinted dancefloor numbers. ‘Fleur de Lys’ crashes into a powerful opening, up there with Beck’s ‘Dreams’, as the top-line bounces through with a heavy bass adding momentum. Closer ‘Telefono’ is the most interesting narrative, pining for a lover abroad on voicemail (“I’m just calling to say, I cannot sleep while you’re wide awake”). These songs all demonstrate abundant competence, but these individually polished moments become a mess when compiled together. And when compared with the thrills of their preceding tunes, the disappointment grows. ‘Tuttifrutti’ is a poor man’s ‘SOS in Bel Air’, which, in turn, was a poor man’s ‘1901’. Perhaps it is actually impossible to beat, or even equal, the near-perfect triad of ‘Rome’ - ‘Countdown’ - ‘Girlfriend’.

Phoenix have always been masters at capturing summer, with their images of hot days and cold drinks, their stories of love and lust, their soaring hooks and earworm choruses. With Ti Amo, they’ve given us another summer holiday, which is all very well and good, I’m not complaining about summer. The problem is that a few years ago we had the perfect summer, where everything fell into space. Now we’re left unable to enjoy the new summers, instead preferring to flick through the photo album and revisit that perfect summer once more. In other words, I'm going to go and put on ‘Lisztomania’.