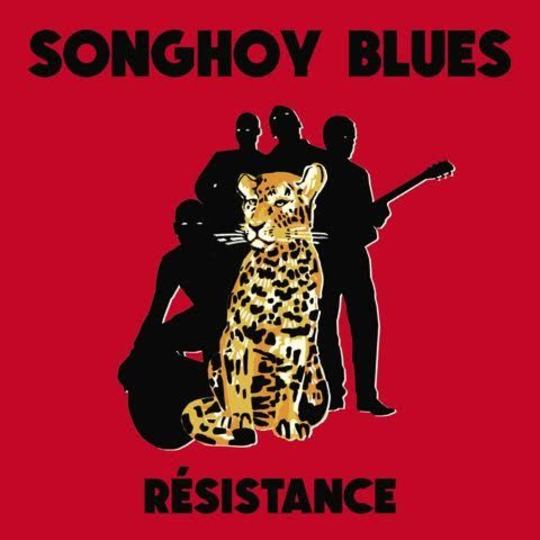 You’ve got to applaud a band who go above and beyond just to be able to write, play and record their own songs. After guitarist Garba Touré’s home in northern Mali was occupied by jihadists with a violent hatred of music, he fled south to Bamako, the capital, and formed Songhoy Blues with three other musicians.

It is no wonder, then, that ‘Bamako’, the second track on their second studio album, Résistance, is so full of life. This is the place they sought solace, and you can hear it. It’s a song about having a good night out in a town full of energy, and it’s a track that kicks back with brass bursts on odd riffs, adding to the already swelling funked-up guitar line, the stalwart of this band’s sound.

When Damon Albarn’s Africa Express musical project came to Bamako, Songhoy Blues auditioned and were picked to contribute a track to a compilation album, working with Nick Zinner, guitarist of the Yeah Yeah Yeahs. They named their first album Music in Exile, a sure-fire description of the band’s dangerous beginnings and an indication of where the anti-music terror of northern Mali had taken them – far from their home.


It then took them on successful tours all around the world. If Résistance stands for something different from that first record, it is the sound of the band continuing to fight back. Music is their form of resistance, and the joy of their sound, as well as the plethora of musical influences they picked up on tour, embody their defiance in never allowing something as life-affirming as music to be taken from them.

The communal spirit lives on. The nature of this music is the expanding joy and its danceable nature – it’s no wonder others want to get in on the act. Notable collaborations on this record come from punk-rock legend Iggy Pop, as well as South London grime artist Elf Kid. At the beginning of ‘Sahara’ is Iggy Pop shouting a somewhat unnecessary “We’re going to the Sahara, baby”, before half-singing, half-speaking “It’s a genuine culture / No Kentucky-fried chicken.” It’s a ridiculous line, made all the more prominent with it being one of the record’s very few lines in English, but you have to imagine it all being said with a smile, from Iggy and the band alike. The track is saved by a wonderfully incessant guitar groove which breaks down into a cutting psych-rock jam, heralded by a funk which resonates throughout the record, continuing with no sense of stopping through slower numbers like ‘Hometown’ and ‘One Colour’, where even a children’s choir doesn’t diminish from the undeniable groove of this band.

Elf Kid’s verse on ‘Mali Nord’ is lyrically typical of the South London grime scene. You could argue that this Lewisham youth has few problems compared to the genuine risk of losing your hands if you are caught playing music, a very real risk once faced by the members of Songhoy Blues. But hearing the voice of a young rapper alert to the problems of asylum-seeking is reassuring. It also seems to point in just the direction the Songhoy boys are after: of varying people from any background coming together simply to play music.

It’s a music difficult to neatly categorise (as much of the best music often is) and western listeners should be careful not to generalise. Any notion of ‘desert music’, associated with the legendary Sahara stalwarts Tinariwen, doesn’t quite fit here. The musicians may all be from Western Africa with similar back-stories of having escaped troubles in their homelands, but where Tinariwen take a back-seat groove approach, Songhoy Blues are their younger, faster champions, with a far fuller pocket of energy. This quartet are very much a pop guitar band, borrowing from American blues icons like the Jimi Hendrix or John Lee Hooker they spent their teenage years stuck on, or Talking Heads' Remain in Light, which, itself, took inspiration from Western African music.

Traditional African influences come to the surface in the spirit with which frontman Aliou Touré sings in a loving call-and-response style with his bandmates. Short solos for fiddle bring tracks like ‘Hometown’ back to the roots of what this kind of ‘folk’ music – in its very original sense, meaning music of the people, of ordinary, acoustic instruments – is about. Elsewhere, handheld percussion cuts through the chorus of ‘Yersi Yadda’, competing with the Western drum kit, but even keener to stick to the slinky guitar riff it emulates.

Where British guitar bands like the Arctic Monkeys have failed in enabling their audiences to dance in any way more stylised than an up-down jump, this guitar band play songs you could very nearly jive to, partner in hand.