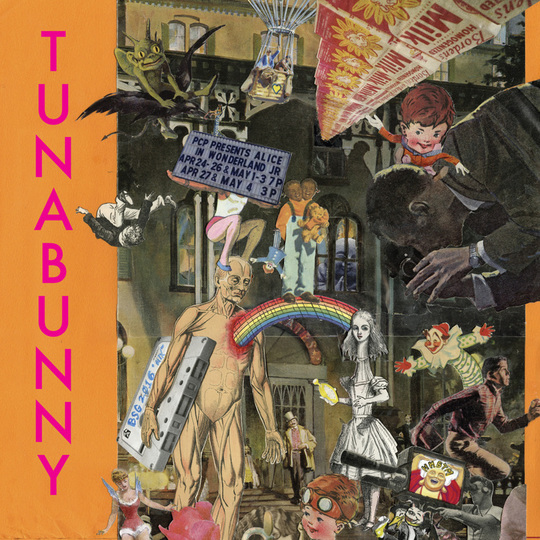 Grunt. Any introduction of Tunabunny demands an objective definition that I can’t define. What is this phenomenon? What is this persistent ecstasy? What is the self in this odyssey across the subconscious?

Easy answers rest at my fingertips, and sneer. Tunabunny are from Athens (no, they’re from the outskirts, both the physical and social outer limits of the town). Tunabunny are a four-piece (no, that’d lump four distinct personas – Mary Jane the warrior, Brigette the rogue, Jesse the wizard, and Scott the Scott - into one faceless collective). Tunabunny are on their fifth album (well, yes, but that’d reduce the previous ones into inert fragments of history, whereas each still carries a pulse in the extended chambers of my metaphorical heart).

And then there’s the actual review to write! How? With what angle could I possibly appraise this horizon-sized road map, where both band and listener can wander and wonder in unison? Standard practice demands landmarks for the uninitiated – things like Pavement, Guided By Voices, Television Personalities - but if I started on that route, I’d have to divide dissonance from melody, and interrupt the dialogue between influences. To unfold such origami such as, say, 'Magic January' would ruin the epiphany in the middle, where the waltz-time intro morphs into a proper stomp-out. To dub 'Me and Nancy' a feminist anthem would elide over its impish stalking stride, and the big ol’ Love-ish bloom of noise in the middle. Even something as deceptively casual as 'The Rest of Us' depicts four noggins tugging in tumultuous tandem, as triumphant kazoos (?) buzz through the sunny Byrds-like jangling. Just typing this kind of delineation pains me, as the whole fun in Tunabunny lies in the wandering, the shadows in the sunlight, the structured subconscious.

The very essence of Tunabunny – well, apart from subversion - is paradox. Though shrouded by abstract notions of identity and perception, PCP takes us back to basic shapes. Songs like 'Count to Ten' and 'Come Feed Your Dogs' seem so simple, like linear memories recovered from a child’s mind. But no – one baffles with machinery, and the other admonishes a negligent father. These are not mere pulleys and levers, but windows and mirrors – especially the bubbly “Incinerate”, which offers at least three different layers of how to be on fire.

And what – what words even express the unmediated bliss of 'Dream Sugar'? What? Drone? Heaven? Death? And the one-minute broadcast of 'Work It Around' – you’ll press yr ear against the door, transfixed by the uncanny (a battered capsule from Juju-era Siousxie, which was itself a capsule from the future), but the moment fades before you’ve gathered anything. The term 'mystery', in most cases of music writing, alludes to broken narratives and foggy scenery, but here Tunabunny can cram enigma in the tiniest crannies, like in the wobbly analog waves of 'Seek Consequence' and the freak folk curio of 'Images of Future Selves'. They’re fleeting, but not inconsequential – every moment turns over another stone on the path, asks another question to the attentive traveller.

Now, it’s not like Tunabunny have 'grown up' or 'come into their own' with PCP. Songs like 'Start It' and 'Noise Problems' cement what is, by this point, canonical Tunabunny: roaring guitars, Mary Jane and Brigette in beast mode, breathless sprints through the intersections of rock and pop. Indeed, closer 'I Thought I Caught It (With You)' demonstrates exactly what the gang do best, and why they’ve done that for so long. See, writing IS fun, when you peel back borders and engage with the humanity that surrounds you, and so interacting with that art SHOULD be fun for the audience too, in every aspect. Thus, the quirkier experiments on PCP - like the concentric circles of 'Shiftchanger', or the Eno-dialed Walkman of 'It Could Be Something' - only extend that same exhilaration toward less-travelled routes.

What I’m trying to say is – whether they realise it or not, many artists impose boundaries between your perception and their truth, between their artistry and your ineptitude. In PCP’s existential wonderland, those boundaries don’t exist. Hence, why I can never define Tunabunny – for, in their boldest and bravest journey to date, definitions would only drag them down.

The Underside of Power