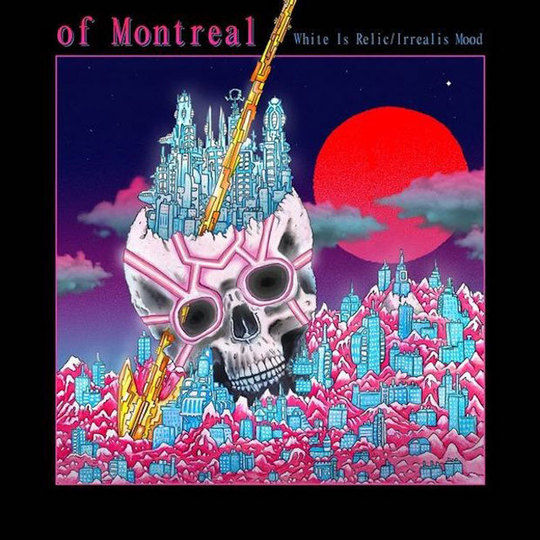 A decade ago of Montreal were poised to take over the world. Or at the very least they were poised to achieve medium success and graduate to 3,000-seater theatres on a more permanent basis than their semi-infamous 2008 gig at New York Roseland Ballroom, which climaxed in lead singer Kevin Barnes riding a horse on stage for some reason.

Exactly why we’re now in a position in which the band are releasing their fifteenth album White Is Relic/Irrealis Mood to almost zero fanfare (there isn’t even a UK publicist) is probably both complicated and very simple.

The obvious answer is that after composing his magnum opus, 2007’s Hissing Fauna Are You The Destroyer? – a hugely ambitious record, but also the band's most musically and emotionally accessible – Barnes went on to release a vast array of more difficult albums that gradually sapped away his fanbase.

Still, it’s difficult to listen to 2008’s Skeletal Lamping and 2010’s False Priest and not hear confident, prescient records that anticipated the demise of indie rock and the implacable rise of identity politics, created during a period in which Barnes gave a smart leg up to nascent stars Janelle Monae and Solange Knowles.

But the band put out a further four albums between 2012 and 2016, plus various EPs, with the sound and line-up evolving at a bewildering speed. None of this made it super-easy to follow them, especially as the drawbridge had been more or less raised on the sort of universal anthems and emotions that had powered Hissing Fauna… to the top of the Noughties indie canon.

On their latest record this is all perhaps tacitly acknowledged in the title of a lengthy electro jam entitled ‘Plateau Phase/No Careerism No Corruption’, though as is the way with Barnes, his world feels so hermetically sealed that one doubts he really cares about his own shifting circumstances, especially when he can just make a record on his own – which he has done here, the first of Montreal album to substantially be recorded by Barnes solo since Skeletal Lamping.

In a sense, much of the territory is familiar. Barnes’s accompanying essay states that his marriage has failed (but that he’s been able to forgive himself). But the sardonic allusions to fucked up relationships could easily have come from another record, and while the barbs are probably not directed at his ex, Nina, it’s difficult not to file lines like “If you talk to Symbol, tell her I've moved on/I'm ghosting her 'cause I want it to be over” or “When things are too nice for too long/I lose myself, I lose my what's good/Want to lash out, want to blow things up again” (both off closer ‘If You Talk to Symbol/Hostility Voyeur’) into the general mish mash of Barnes’s decade of marital angst.

Likewise the stated themes of the record – apparently Barnes has fallen in love with somebody new, and has become paranoid about the artificiality of the constructed nature of reality – are expressed in such a quintessentially of Montreal-ish way that it’s difficult to read them as giving this record any particular USP unless you’re an absolute diehard reader of the lyrical runes. And we’re now so inured to byzantine oM track names that Barnes’s decision to give everything two seems fairly unremarkable.

What we do have, though, is yet another shift in musical direction. The songs are essentially lengthy electronic pieces, inspired in part by extended Eighties pop mixes. They are not, as rule, pop songs, being too long and too deep and too suffused with a sort of feverish, muttered quality that often makes it feel more like you’re eavesdropping than having a show put on for you.

But Barnes’s way with a melody is still pretty terrific, and this is considerably more fun than recent dabblings with prog and country. Single ‘Paranoiac Intervals/Body Dysmorphia’ is probably the most successful track here, a sprightly, unhinged disco outing on which Barnes plays the part of ugly, jealous lover (“Anyone but me is an antipathy, Anyone but me is just your enemy… you should be fucking with no one else”) before a lengthy transition to gothy splendour and the words “body dysmorphia” chanted to the fade.

White Is Relic/Irrealis Mood is, in essence, a very solid new of Montreal album. But have there been enough of those now? For many people who got on board a decade ago, of Montreal’s career has become a priapic, confusing blur. But for the truly faithful it must be reassuring to know that there will always be a new record soon, their prophet undeterred as he marches into the wilderness.