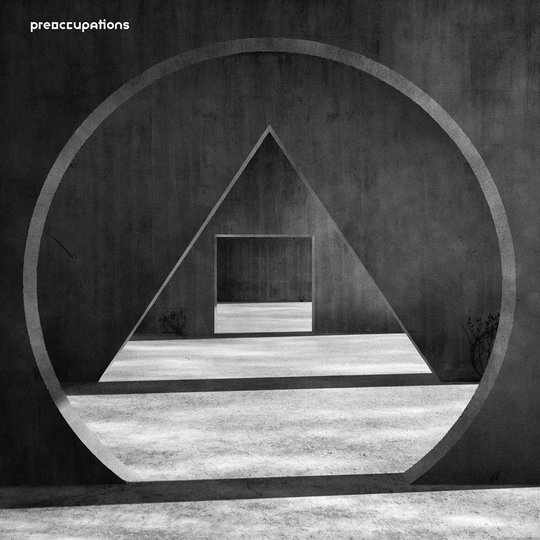 The band-formerly-known-as Viet Cong embrace their destiny and go full goth on New Material, which is either their second or third album depending upon how you want to call it.

Cacophonous processed drums, ethereal synths, hisses of distortion and Matt Flegel’s increasingly sepulchral vocals – these nine tersely-named songs do not represent the sea change in Preoccupations’s sound that took place between 2015’s Viet Cong and 2016’s Preoccupations (or, for that matter, the dramatic shift that occurred between their current incarnation and predecessor project Women).

Nonetheless, the almost grudgingly-entitled New Material – technically their first album not to be self-titled – sees another palpable shift in their sound. It is their most clangorous and processed record, and the one on which long-discernible Brit influences – notably Joy Division and The Cure – come aggressively to the fore.

Saying that New Material mixes the machinal bottom end of Closer with the chilly grace of Faith is definitely overselling it a bit. But it’s at the very least a fairly useful way of thinking about the record.

And at its best moments it does actually nail that mix: opener ‘Espionage’ coasts in on propellent, reverby, Simon Gallup-tastic bass, with a truly infernal sounding Flegel roaring over it with a rare intensity that really does recall Ian Curtis. It’s also possessed of a truly gargantuan chorus, a sort of ferocious call-and response that has the air of ‘Twist and Shout’ relocated to hell.

Just as good but rather gentler is ‘Disarray’, which is all lambent sorrow, the title word a backing vocal sighed repeatedly over a beautifully treated ghost of a guitar line. It’s both beautiful and a reminder of Flegel’s curious chameleonic qualities: he can often sound like a drastically different singer from song to song.

Throw in the phenomenally grandiose crankiness of ‘Doubt’, with its chorus – “with doubt, we comply” – spat out with air-scorching disdain – and the magnificent instrumental closer, ‘Compliance’, a tidal wave of grey, shoegazey noise, and you’ve basically got a 50 percent great album already.

That New Material doesn’t quite live up to its predecessors is in part a question of production choices made by the band and Justin Meldal-Johnson (who did the mix). Churning, processed and aggressive, it can feel like a slog when it’s not being actively brilliant, and though there’s a fair amount of musical diversity in theory, in practice the hard, churning, heavily processed bottom end can feel a touch repetitive. Where Preoccupations ran the gamut from the aggressively expansive ‘Memory’ to the perfect pop of ‘Fever’, New Material can feel like it’s all coming from a pretty similar place.

And if Flegel is almost unrecognisable as the obscure mumbler of his Women days, the cacophonous bile he can now inject into a song isn’t quite backed up by a discernible frontman persona: he has a good turn of phrase in isolation, but his lyrics rarely cohere, and there is a sense that he still prefers to watch everything from the shadows. If he’s going to continue to move front and centre, he may have to sacrifice some of his nebulousity,

Nonetheless, if you sense that Preoccupations have yet to nail a defining sound, then it’s part of their appeal that they may in fact never be defined by a sound. New Material hits the spot more often than not. And there’s something thrilling about the fact you still can’t quite pin Preoccupations down: their shifting sound isn’t a logical evolution, but an unpredictible journey into the dark.

The Louder I Call, the Faster It Runs