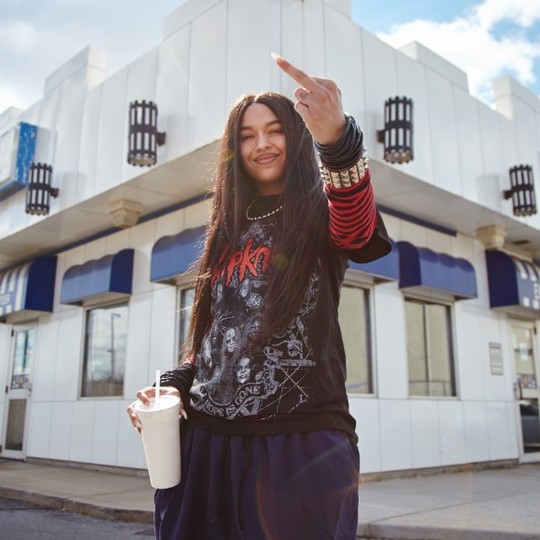 Destiny Frasqueri Aka Princess Nokia could be one of the most important figures in music at the moment. Her music is full of clever juxtapositions, blazing beats with positive lyrics, and her interviews are erudite, insightful and illuminating. So far she has released three mixtapes that range from fun sun drenched R&B-pop to full on raging footwork, while also finding time to perform and improv and freestyle set with jazz trio the Onyx Collective.

At the start of the year it was announced that Frasqueri was releasing A Girl Cried Red, an eight-track emo-inspired mixtape, but instead of crunching guitars and shouty choruses, Frasqueri has released something that taps into the alienation and introspection of the genre, but with none of the cliches.

If you have turned up expecting 1992 2.0 you are in for a shock as opening track ‘Flowers and Rope’ is full of acoustic guitars, understated snapping beats and Frasqueri’s graceful vocals. “It won't even hurt, I'm already dead (I'm already dead). Voices in my head, monsters under my bed” she sings liltingly. Normally this would be jarring, but thanks to the delicate delivery it doesn’t set off alarm bells regarding Princess Nokia’s mental state. The chorus is “Bring me your flowers, I'll bring you my rope. Play all the records that we love the most” almost sounds like a charming way to spend an afternoon, until its slightly darker connotations registers.

'For the Night' feels like an out take from last year's 1992. Laid-back juke-esque beats, lopsided melodies and some scattershot lyrics, but auto-tuned to an inch of their life, is all it takes to get the message across. It's as if she's saying 'Hey, I know this is different, but stay with me for the rest of this and you’ll see what I’m trying to do'. It works. It reassures us that this is the same artist that captivated us and retuned out faith in hip-hop.

'Look Up Kid' has a jaunty, clean sounding, punk guitar. There is a playful bounce to it and a pop sensibility that has been hinted at, but not delivered. Princess Nokia seems to be having a blast on 'Look Up Kid'. Frasqueri has an elegance to her vocal delivery, that in other hands would feel cliche or fake, but Princess Nokia feels genuine, and dare I say, authentic. She's relishing playing with a live band and channelling her teenage bratty, angst-ridden self.

The stand out track of the mixtape is 'At the Top'. This has more in common with the trappy 'For the Night' than the power-punk of 'Look Up Kid'. Musically its business as usual, but the lyrics are an attack on anyone who claims she's sold out. On 'At the Top' Frasqueri delivers the line of the mixtape ‘I don’t care about fame, I just care about bands’ is for all the haters who questioned why an urban artist was claiming to be firstly into rock and emo, and secondly releasing an emo tinged mixtape. A Girl Cried Red ends with 'Little Angel' a tender ballad about a departed friend. Its an emotional end to a mixtape that wears its heart on its sleeve.

On A Girl Cried Red Frasqueri showcases that she is more than just visceral beats and fierce rhymes. She has written some of her most confessional and personal lyrics to date. This is another side to her, and shows she is capable to writing thought provoking music as well as the savage electronic hip-hop of ‘Tomboy’ and ‘Kitana’. As none of the songs push the three-and-a-half-minute mark, they never outstay their welcome and scream out for repeat listens. However at times A Girl Cried Red feels half-formed, and more like sketches or works-in-progress than fully formed songs, but there is beauty to this. Frasqueri is lifting the veil of her songwriting process and divulging more than she probably realised at the time. And this is what makes A Girl Cried Red, and her Princess Nokia project so captivating. Her strength of conviction is such that she'll follow a project through to its conclusion because she feels passionate about it, rather than releasing something safer and ultimately easier.

In the Rainbow Rain