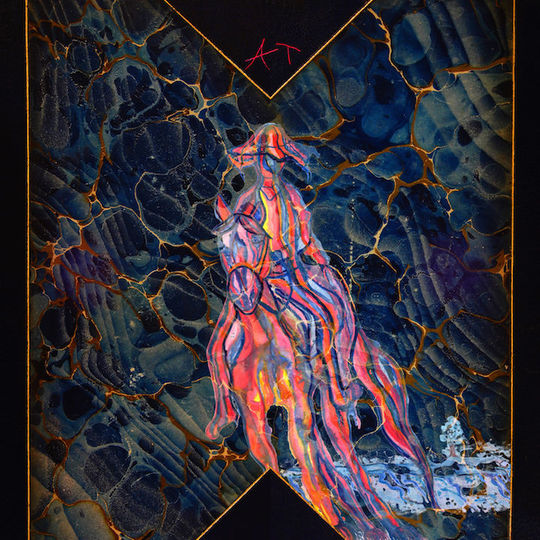 Once prominent critical darlings, a series of lacklustre (by their elevated standards) releases spanning group and solo efforts have somewhat dampened the overall Animal Collective mystique. Not severe dampening mind you, as each AnCo release seems to harbour at least fleeting levels of brilliance, but enough dampening to cause mild concern among their most faithful.

As a group, 2016’s instrumentally elaborate Painting With puzzled fans and critics alike, and 2018’s audiovisual album Tangerine Reef was notable as an ambitious undertaking but not much else. As for Avey Tare, 2010’s Down There was a surprisingly somber affair in both quality and subject matter, fusing clips of distorted human voices, various animal noises, and flushing water to paint the picture of an artist both literally and figuratively trying to stay afloat. The countryside manner continued with a venture into Big Sur, and the abounding, natural picturesque environment led to the development of 2017’s Eucalyptus, an album teeming with romantic turbulence and myriad personal sorrows that was intriguing for a few listens before being mercilessly shelved in an era of low attention spans.

But lo and behold, Tare’s Cows On Hourglass Pond finds him once again revisiting the basics and particulars of what made each member of AnCo a mythological force once upon a time. There is a balanced dose of coruscating poetics, glistening instrumentalism, and all the kooky sonics befitting an AnCo release. The most notable aspect is a wistful longing that pervades the record both in the lyricism and song structure - more hopeful ruminating than dejected pining. Fusing ambient and folk rhythms over a dub-techno mix, ‘What’s The Goodside?’ features Tare contemplating the concept of ageing not just in a personal or micro sense but a worldly, macro sense as well. This fixation on time and the silhouette of a man concerned with humanity’s overall place in history and the associated ramifications abounds again in ‘Nostalgia in Lemonade’, with an all encompassing, outer space vibe. Originally included in the setlist for Tare’s Eucalyptus tour, the song has undergone several iterations and name changes before having its contours smoothed out for inclusion on the album.

It might be an understatement to say that Tare is a deep thinker, and his musical output transcends mere boilerplate philosophies and instead reflects his frequent grandiose musings. Tare’s penchant for the thematically dense lends itself well to the bulk of Cows On Hourglass, moonlighting as a treatise on humanity and popular cultural maxims to weld one of his best lyrically savvy records to date. On one of the album’s standouts, he explores society’s fascination with rituals and the subsequent fervour they inspire on ‘Saturdays (Again)’, one of the catchiest songs in Tare’s entire catalog. He turns his focus to the concerted yearning of mankind again with the wispy ‘Taken Boy’, probing how people often thirst after that which is unattainable - namely the desire for unfettered romantic bliss. He employs a cascading vocal timbre on ‘Eyes on Eyes’ to regal effect, comprising an introspective look at how eye contact can connect human beings in nuanced fashion.

The evocative and immersive nature of ‘Chilly Blue’ puts a pause on the Tare spoken word doctrines for a lush, synth-driven instrumental. But Cows On Hourglass Pond still fumbles in certain spots, like the eccentric ‘K.C. Yours’. The track forsakes the more relatable concerns at the album’s core for an impassioned dissection of the advent of robots (literally). But the humdrum nature of the song’s instrumental backdrop is more incriminating than its bizarre topicality. Tare rebounds with ‘Remember Mayan’, a luxuriant sonic undertaking complete with gloriously discordant guitars and warbly synths. Despite a miss or two, with Cows On Hourglass Pond Tare will likely appease even the most weary AnCo audiences, stringing together an album that is sonically ornate, scintillating, and poetically metaphysical.