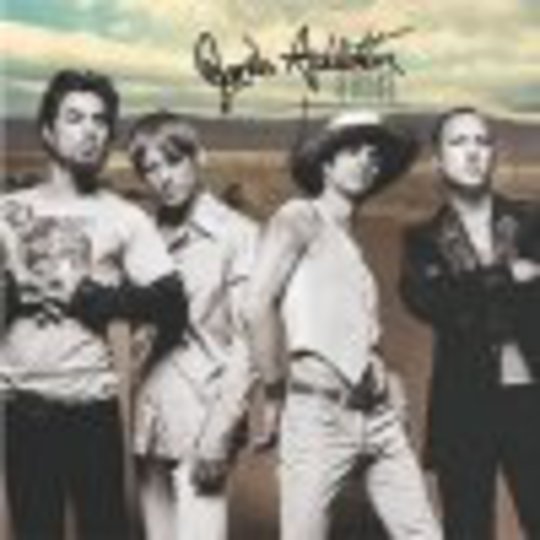 At last, an album that you can't pin down... it's not like a cross between The Stones and The Birds, it's not like early Radiohead, it's not like The Jesus and Mary Chain meets The Stone Roses, or like Metallica crossed with Fugazi and Deep Purple, and not like AC/DC crossed with Queen (though Darkness fans might well love it)... in fact, the only thing it definitely rips off is Jane's Addiction...

The world could, perhaps, have been a very different place if Jane's Addiction hadn't split up in smack-addled acrimony in 1992, leaving the relatively reactionary Nirvana as the default archetype of alternative. Simple four chord grunge, as practised by far too many fuckin bands, would have seemed a little...well..crap had there still been the intricate and fiercely idiosyncratic sounds of Jane's emblazoned all over the airwaves. Sadly...that wasn't the case...and the world needs a band that holds originality as a totem now just as much as it did then.

For those of you who've lapped up the recent single, 'Just Because', this album will only serve to please... huge heavy riffage with metal blaring vocals chopped with intense syncopation and battered rhythms, spiced with tension building bass guitar mantra, spliced with beat lyric vocals that enter your mind intimate and quiet then soar skyward like a jet fighter, dashed with flat-out driving rock, cut with ethereal ambient dreams, soaked in fat rhythms that may at any moment dry up into the mere patter of raindrops.... Just like it did twelve years ago, it makes much of the rest of the competition look like the amateurs and charlatans that they are.

In comparison with their previous albums?... 'Strays' is less dark and intense in it's tone, with Perry Farrell having fun with his natural showmans exuberance. You get the impression, from the relatively guitar dominated sounds that Dave Navarro has a lot more say than previously. Chris Chaney has a different set of influences to the dub-rooted original bass player, Eric Avery, and that makes the music feel more diverse from the bass angle, and gives Steven Perkins an even bigger palette on which to show that he has no real peer in modern rock drumming. Legendary 70's rock producer Bob Ezrin (Kiss's 'Destroyer, Alice Cooper's 'Schools Out', Lou Reed's 'Berlin', Pink Floyd's 'The Wall'...nuff said!) does a great job on this record, polishing the sound and tightening up Perry's vocals, while retaining the details that makes this band special. It's a little less angry than before but, in much the same way as the 'Chili Peppers, Jane's Addiction have got to make music that reflects what page they are on now. Think Jane's Addiction with some of the devil-may-care upbeat feel of Porno For Pyros and you won't be far wrong.

A new decade, a new benchmark... hell... it even makes Muse look a little prissy and QOTSA a little lacking in bite...perhaps only Queen Adreena are able to pull all the same strings as this??... and that's great... 'cause we need a lot more competition at the upper end of the live performance scale..time for the rest to get off their laurels and work for a living.... Jane's Addiction are back in town!

We Learned By Watching