...And You Will Know Us By The Trail Of Dead 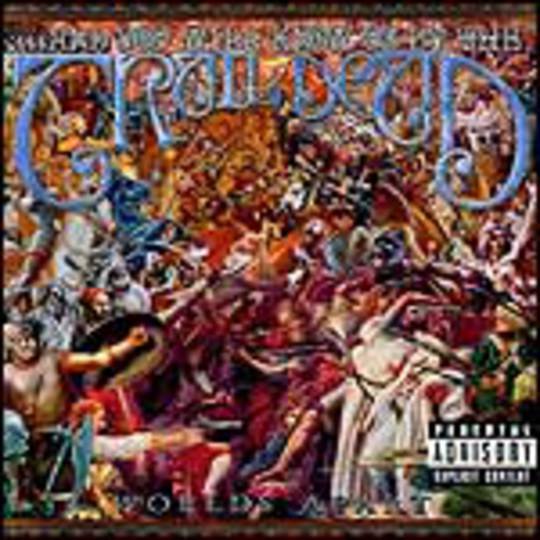 These days it seems that if you’re a musician and you announce an intention to aim high with what you’re doing, you’re immediately met with a chorus of derisive snorts. I suppose you could say ambition is easily misconstrued as arrogance or pompousness, but deep down I think human beings have always suffered from a social disorder I like to call the 'crabs-in-a-bucket' syndrome: we derive immense petty pleasure from watching anyone with a modicum of fame and lofty aspirations fail maiserably.

There's a lot of this venomous sentiment hanging over the release of ...And You Will Know Us By The Trail Of Dead's new album, Worlds Apart, and chances are, they know it. Over the past two years the band’s taken hits for everything from signing to a major label to parting ways with Neil Busch to even the cursive font they use on their album covers. There’s a lot of love for them too, to be sure. In fact, the only received wisdom about this band at the moment is that they’re loved and loathed with equal ferocity.

The album's cover, depicting two armies crashing into each other, seems particularly apt given that Worlds Apart looks set to widen the gap between Trail of Dead's fans and detractors. It's also easily their most accessible, a point that's likely to be seized on by nay-sayers as proof that the band has started watering down their sound in a bid to widen their appeal. This is bullshit, by the way; the album's practically bursting at the seams with additional instruments which expand on Trail Of Dead's punk assault. That's not to say all of it works 100 per cent of the time, but we'll get to that in a minute.

Worlds Apart kicks off with a quietly tapped piano riff that boils into a menacing whirlpool of choral chants, violins, marching drums and human screams. There's a small break as a woman's voice whispers the name of the band, and then the ferocious opening riff of 'Will You Smile For Me Again' barrels out of the speakers with the impact of a one-two combo from an in-form Mike Tyson. Over its near eight-minute length, the song transforms from a teeth-gritting adrenal rock freak-out, to a jazz-tinged heart-warmer, to a tempered slow boiling rock stomp and back again with an enviable ease.

The title track follows, and it's easily one of the strongest songs on the album; Conrad Keely’s visceral anger is palpable over the pounding drums and jangly riff. Lyrically, Keely outdoes himself, sounding off about lousy music, cultural apathy and the wide-eyed anger and confusion anyone with a brain living in a post 9/11 world probably feels. ("How they laugh as we shovel the ashes of the Twin Towers/Blood and death as we pay back the debt of this candy store of ours.")

So far, between the white-hot rage and finger-shredding guitar pyrotechnics, Worlds Apart is pretty much what you'd expect from Trail Of Dead. 'Summer of '91' is the first real bend in the road - the breezy piano line wafting under earnest vocals may be where some decide to get off the ride. 'Summer...' suffers from some Andrew Lloyd Webber comparions on the back end, but it makes sense to twin it with 'And The Rest Will Follow', which soars and undulates on enough drum flourishes and marching chords to herald the arrival of royalty.

This sets up the album beautifully for the triumphant 'Caterwaul'. Jason Reece's first contribution strikes the perfect balance, bringing the drama and the pain in equal measure; drums crash, guitars burn and break and the result is enough to leave you feeling punch-drunk. The only downside to 'Caterwaul' that what follows isn't as consistent.

Out of the remaining handful of tracks only 'Let It Dive' lives up to what's gone before, its rumbling drumbeat providing brawn and weight to the shimmering guitars. Other than this, the rest of the album is a slog. Some of the songs collapse on themselves from trying too hard - 'Classic Arts Showcase' loses much of its power to an overblown bridge at the centre, barely making it out of the woods thanks to being bookended with hostile riffage. 'All White' sounds like an outake from Pink Floyd's later days and the Billy Corgan-lite closer, The Lost City Of Refuge, is simply awful.

So they missed the bullseye. But that's no reason to yell "sell out!", or to deride them as poseurs. The musical place Trail Of Dead find themselves at these days is where they've been headed all along - from the very beginning, the band made it abundantly clear that they were on a steady march towards the mainstream. When they left the indies, Conrad Keely went on record saying that the reason the band were signing to a major was to get their music out to as broad an audience as possible. And while Worlds Apart is accessible, it's not like the band achieved this by dumbing down their music.

Taken in context with the band's career thus far, Worlds Apart seems far more in step with their chosen direction. Much of the criticism levelled at the band is due to the fact that fans of their earlier work never realised that this band's moniker is also its mission statement. If they did, they never dreamed it would one day apply to them.